The British Raj According to Tharoor: Some of the Truth, Part of the Time

New Views of the “Special Relationship” compiled by Dobson and Marsh

A close Anglo-American partnership was a guiding principle in Churchill’s thinking about international relations. The creation of such a partnership was a central aspect of his long political career. While still a young backbench Member of Parliament, he said, “it ought to be the main end of English statecraft over a long period of years to cultivate good relations with the United States.” In 1918 he declared it his hope that the two countries would “act permanently together.”
Posted in: 2017, Books,
Tags: Alan P. Dobson, Bradley P. Tolppanen, Dwight Eisenhower, Harry S. Truman, Iron Curtain Speech, Lord Halifax, Steve Marsh, Suez Crisis, Warren F. Kimball, Winston S. Churchill,
Read more

An Architectural Heritage and the Life of Winston Churchill

An outstanding collection of London and other photographs cast Churchill’s life as an architectural biography.
Posted in: 2017, Books,
Read more

The premise advanced by Felix Klos is all wrong. Winston Churchill wanted Britain to be “with” Europe, but not a part “of” it.
Posted in: 2017, Books,
Read more

David Owen with his government experience provides insight, though not enough of it, on War Cabinet machinations in the power struggle of May 1940.
Posted in: 2017, Books,
Read more

Churchill on Fisher: “I am glad we were friends in the end.” Was his love for the admiral an error of judgment? Barry Gough has the answers.
Posted in: 2017, Books,
Tags: Barry Gough, David Lloyd George, Jacky Fisher, Siegfried Sassoon, Winston S. Churchill,
Read more

Like the Curate’s Egg, Parts of It are Excellent 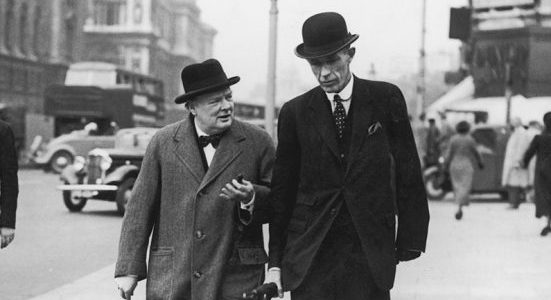 The “book to go with the film” by Andrew McCarten falls short of the movie. It supposes Churchill was an ordinary man. In the movie, he is anything but.
Posted in: 2017, Books,
Read more

In his review of "Churchill Warrior," Dr. Sterling touches on how Brian Lavery balances conciseness with a gripping narrative.
Posted in: 2017, Books,
Read more

The Parliamentary Watershed that Changed the Course of History

Michael McMenamin smartly praises Shakespeare's "Six Minutes In May" for its coherent, fascinating account of Churchill's rise to power in conjunction with Hitler's aggression in the West.
Posted in: 2017, Books,
Read more

A New Pictorial Documentary With a Twist

This eclectic photo documentary is hardly essential to the Churchill library, but may appeal through its unique visual presentation of fairly obscure subjects.
Posted in: 2017, Books,
Read more

Against the background of the retreat and escape of the British and French Armies, Korda poses the trial of strength between Halifax and Churchill. His not entirely novel thesis is that Churchill’s position of no truck with Hitler would have been untenable had the Dunkirk evacuation not been seen as a success in Britain. Like Churchill, Korda does not call it a success. But he offers Montgomery’s words to describe Britain’s mood. Escapees wore “a coloured embroidered patch on their sleeve with the title ‘Dunkirk.’ They thought they were heroes, and the civilian public thought so. It was not understood that the British Army had suffered a crushing defeat.”
Posted in: 2017, Books,
Read more