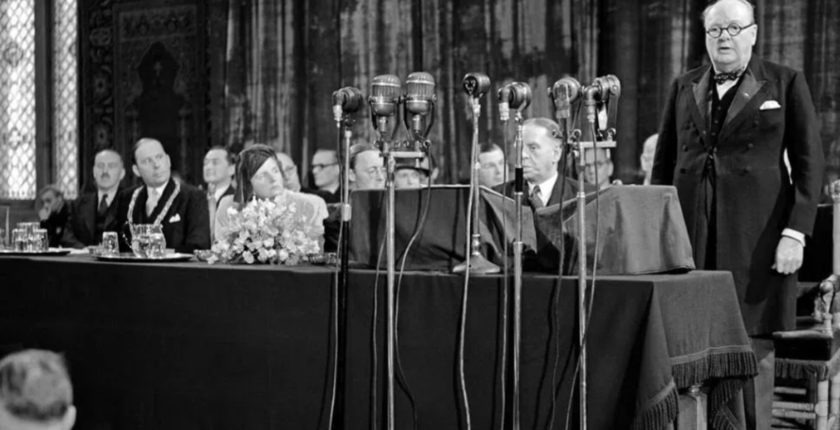 Featured Image: “A high and a solemn responsibility rests upon us here this afternoon in this Congress of a Europe striving to be reborn.”
– WSC, The Hague, Netherlands, 7 November 1948 (Rumeli Observer/ESI) 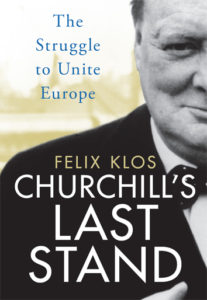 Dr. Felix Klos is a personable and intelligent American-Dutch historian and writer who has worked hard and undertaken much research. In trying to persuade us that Churchill favoured Britain joining a federal Europe, however, he comes up against several immovable obstacles. The most serious of these is that in the four postwar years that Churchill was prime minister, between 1951 and 1955, he personally, regularly and decisively blocked all movement towards Britain joining any of the European federal institutions that existed. However engaging Klos may be, and however well written his book, he is utterly wrong in his central thesis.

At the time of the British European Union referendum in 2016, Klos brought out a brief book that stated: “I am in no doubt that Churchill wanted an ever closer union of European states. More than that, I argue, he wanted Britain to play a leading part. Churchill came to the conclusion that Britain’s future lay ‘in’ Europe.”

Fortunately, Dr. Klos is too conscientious a historian not to give enough evidence in this book to prove the precise opposite. He takes the reader through Churchill’s long engagement with the European movement. He shows how, since 1930, Churchill had supported binding France and Germany together so that they could not fight one another, while also thwarting Soviet communism.

Klos rightly quotes extensively from Churchill’s great speeches of the late 1940s, delivered in Zurich, The Hague and Strasbourg, promoting the cause of European unity. The former prime minister uttered many ringing phrases: “We must build a kind of United States of Europe…. “Let Europe arise!” Yet in these speeches, Churchill made it perfectly clear each time that he did not want Britain to be a joining member of the European project. As he put it in Zurich: “Great Britain, the British Commonwealth of Nations, mighty America, and I trust Soviet Russia, for then indeed all would be well, must be the friends and sponsors of the new Europe and must champion its right to live and shine.”

Sponsorship is not membership

A friend and sponsor is not the same as a member, as he made abundantly clear in his postwar premiership. Ardent Euro-federalists, such as Gladwyn Jebb, Britain’s representative at the Brussels Treaty Permanent Commission and later a Member of the European Parliament, deplored how, as he wrote in his memoirs:

Churchill was himself clearly not a “European” at all. If he had had his way, Britain would have been “associated” with a Europe that would extend from Lisbon to Brest-Litovsk…. but would never have formed part of it herself. Why the European federalists should have apparently thought at one time that he was thinking of British membership of a federal Europe I have never understood. He always made it quite clear that Britain, if he had anything to do with it, would stand aloof.

“In our European Movement we have worked with federalists,” Churchill told the House of Commons when in opposition. “And we have always made it clear that, although they are moving along the same road, we are not committed to their conclusions.” British pro-Europeans despaired of the way that, as Jebb also put it, “Churchill was not really in favour of joining anything like a supranational Europe.” In August 1948, Churchill told Violet Bonham-Carter that the “Federal solution” could not work because “a Parliament of Europe [was] quite impracticable.”

On becoming Prime Minister in 1951, Churchill lost no time in also disappointing those who wanted Britain to join the project for European unity—including both his sons-in-law, Duncan Sandys and Christopher Soames. On 29 November 1951, he wrote a minute on Robert Schuman’s plan for a European Coal and Steel Community—which was to form the basis for the later European Economic Community (EEC). He stated unequivocally: “Our attitude towards further economic developments on the Schuman lines resembles that which we adopt about the European Army. We help, we dedicate, we play a part, but we are not merged with and do not forfeit our insular or Commonwealth character.”

A week later, Churchill’s foreign minister Anthony Eden sent a note to  the Council of Europe in Strasbourg. Britain, he said, would continue to extend friendship and cooperation: “It is only when plans for uniting Europe take a federal form that we ourselves cannot take part, because we cannot subordinate ourselves or the control of British policy to federal authorities.”

Again to the House of Commons on 11 May 1953, Churchill stated: “We are not members of the European Defence Community, nor do we intend to be merged in a federal European system. We feel we have a special relationship to both.”

It was true that Churchill once came up with a plan for the pound sterling to join a common currency. But that was with the U.S. dollar, which he suggested in a 1933 conversation with James Roosevelt, Franklin Roosevelt’s son.

“Where do we stand?” Churchill asked the Commons in 1952: “We are not members of the European Defence Community, nor do we intend to be merged in a Federal European system. We feel we have a special relation to both. This can be expressed by prepositions, by the preposition ‘with’ but not ‘of’—we are with them, but not of them.”

Nothing could be clearer. Felix Klos therefore completely fails to persuade us that another such preposition might be “in,” rather than Churchill’s own preferred position of “out.”

Andrew Roberts is the author of Masters and Commanders: How Four Titans Won the War in the West and Storm of War: A New History of the Second World War. His next work, Walking with Destiny, a new biography of Sir Winston Churchill, may be ordered now for delivery in November. This review first appeared in The Spectator of 17 February 2018 and is republished by kind permission.