The Churchill Project - Hillsdale College > Articles > Books > 2017 > The British Raj According to Tharoor: Some of the Truth, Part of the Time

The British Raj According to Tharoor: Some of the Truth, Part of the Time 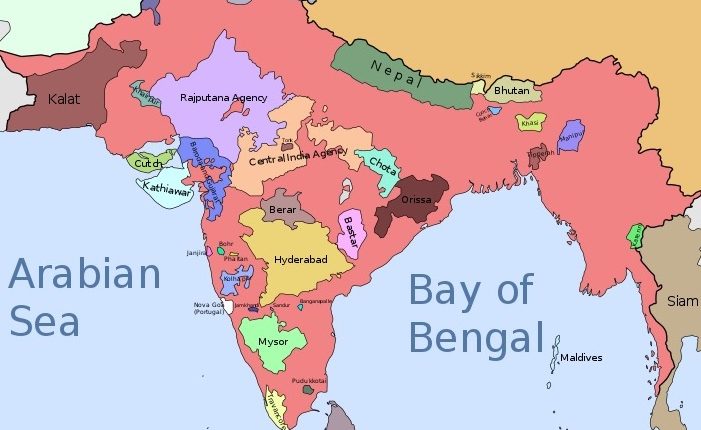 The Indian Empire and Burma, 1909. British areas are in pink. (Wikimedia Creative Commons, 2016)

In the eighteenth century, India’s share of the world economy was as large as Europe’s. By 1947, after two centuries of British rule, it had decreased six fold. So states Shashi Tharoor on the cover of this book. Britain’s “looting” of India led to this disaster, Tharoor writes. The looting began with the “plunder” of Indian wealth by East India Company officers like Robert Clive. It continued via unequal trade and general extraction in the 19th century. The Free Trade policy of the Empire ruined India’s artisans and enabled Britain to build a world-leading textile industry (Chapter 1).

Likewise, the British-Indian state paid a sum of money every year to Britain for services like interest on public debt or salaries of expatriate military officers. This drain of resources left India poorer. Though the British did introduce some instruments of modernization such as railways and the rule of law, these “supposed ‘gifts’ were in fact designed in Britain’s interests alone.” 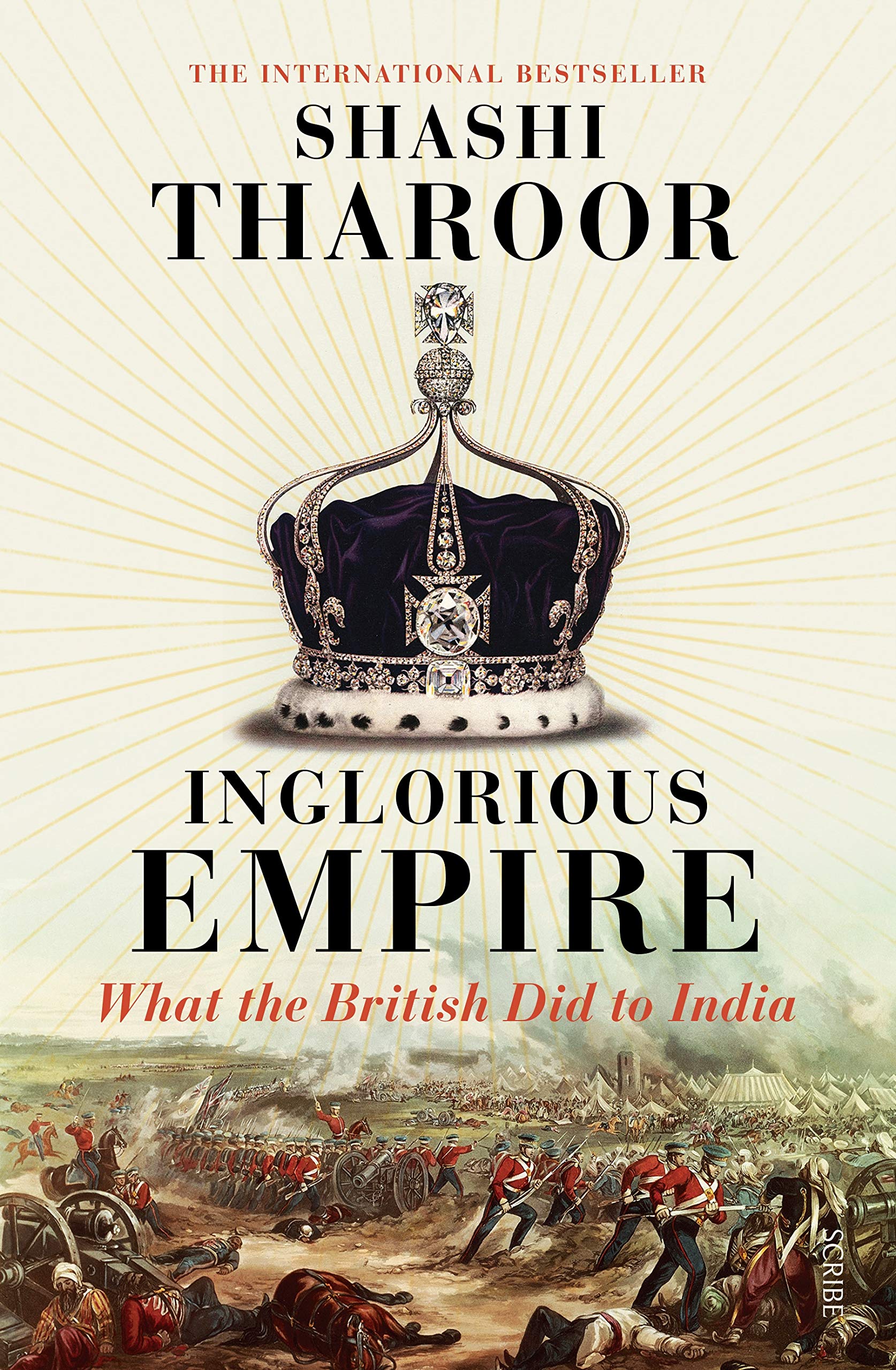 British divide-and-rule policies strained the parliamentary democracy the British introduced during their reign (Chapters 3 and 4). A history of famines reveals how indifferent the state was to the welfare of ordinary Indians (Chapter 5). In this way, British imperial rule left India devastated.

Tharoor makes his case with passion and plain good writing. The facts cited in the book are beyond dispute. The story is meant to be blood-curdling and the colourful language—including liberal use of “depredation,” “loot,” “rapaciousness,” “vicious,” “brutality,” “plunder” and “extraction”—produces that effect. Like a religious text, it tells a straight and narrow story with the zeal of a holy warrior.

None of these qualities makes the interpretation right, however. Few professional historians think that the British Empire ruled India with India’s best interests in mind. Yet, few would consider Tharoor’s dark narrative an accurate depiction of one of the most complex 200-year episodes in world history. The idea that India was a prosperous society, which British repression made poor, has circulated through academic and political circles since 1900, especially within the Indian National Congress, the political party to which Tharoor belongs.

The best parts of the book restate this old idea. Structurally, the claim that India was great until British repression made it poor is suspiciously similar to the claim the Hindu nationalists make today—that India was great until Islamic repression from roughly the thirteenth century made it poor. The similarity is not accidental. Both are distinctly political narratives. The Congress needed the story to fight British rule in the early 20th century. It was a useful weapon then. But was it ever the correct story? In fact, generations of historians (none cited in the book) have shown that it is not.

For example, research done by Stephen Broadberry, Bishnupriya Gupta, Peter Lindert and Robert Allen, among others, shows that India was a poor region long before British rule began. (See, for example, Broadberry et al, 2015.) The statistic that India produced 25% of world output in 1800 and 2–4% of it in 1900 does not prove that India was once rich and became poor. It only tells us that industrial productivity in the West increased four to six times during this period.

Kirti Chaudhuri argued that the drain theory of India’s poverty could not be tested: The intrinsic value of the payments India made to Britain could not be measured. (Chaudhuri 1968.) For example, we may think that the expense of an imperial army was a waste for India. Nineteenth century Indian merchants from Aden to Bombay to Hong Kong would not agree. Besides, as Patrick O’Brien (1988) has shown, the British taxpayer subsidized imperial defence to a considerable extent.

This literature dismisses the idea that British enriched themselves at the expense of their colonies. Research by Patrick O’Brien, Leandro Prados de la Escosura, Lance Davis and Robert Huttenback proves it wrong outright. They showed that the colonial links, while important in numerous other ways, do not sufficiently explain British investment and economic growth. Also, arguments for the Empire rested on strategic needs more than on material gains (O’Brien and de la Escosura 1998; Davis and Huttenback 1986).

Tharoor is ill-informed on the record of Indian economic growth in colonial times. National income statistics do not show that during British rule the Indian economy became steadily poorer. They show that Indian agriculture stagnated, while manufacturing and trade prospered. Tropical heat and water shortages were to blame for the stagnation of agriculture. The failure of monsoon rains was the main cause of repeated famines. Similarly, Free Trade, and the customs union the empire created, in fact helped trade and industry.

A paradox, not a decline

The volume of long-distance trade in India grew from roughly one million tons in 1840 to 160 million in 1940. (Roy 2012; India in the World Economy, 1942, 652–670, 712.) As profits in trade were reinvested, India led the developing world in two leading industries of the industrial revolution, cotton textiles and iron and steel. For example, in 1928, 48% of the cotton spindles outside Europe, North America and Japan were in India. (Dunn and Hardy 1931, 25.) In 1935, 50% of the steel produced outside Europe, North America and Japan came from India. (BKS 1950.) Like these factory industries, even the handicraft industries did well in the early 20th century.

Based on this record, the American economist Morris David Morris asked two interesting questions. First, if Free Trade had so damaged Indian handicrafts, how was it that ten million artisans survived in 1950? Second, if the whole purpose of the colonial state was to enrich Britain at the expense of India, why did the colonial rulers allow the world’s fourth-largest cotton textile mill industry to emerge in Bombay and Ahmedabad in direct competition with Manchester?

Morris’s point is not that the Empire wanted to develop India, but that its legacy contained good and bad. The story of the Raj presents us with a paradox rather than a decline.

If Tharoor’s economic history is ill-informed, the political history is naïve. Surely one’s interpretation of British predation depends on how benevolent Britain’s Indian rivals were. Tharoor glosses over the issue. Absent Britain, he hints, perhaps a glorious Maratha Empire would have saved India. Perhaps not.

Tharoor should read Gangaram’s Maharashtrapuran (1751), a Bengali poetic narrative. It describes in graphic detail how Maratha mercenaries raided western Bengal in the 1740s, tortured merchants, carried out a genocide and raped women. The dark memory of the Maratha raids lived on in Bengali lullabies until recently. The historian Jadunath Sarkar called the raiders “human locusts.” Tharoor, on the other hand, refers to them as “fairly decent” (46). The truth is, most Indian powers in this time lived on predation as freely as the East India Company officers did. The difference was that the Company consisted of merchants, Indian merchants trusted them, flocking to Calcutta to seek their protection. The Company did not see them as a threat; they did see the warlords as a threat.

What Tharoor calls “plunder” was jewelry that Clive and his friends took from Indian nobles and warlords. They had acquired these riches by taxing poor peasants. Who possessed the jewels made no difference to ordinary Indians. Indians did not have a model of welfare state.

A damaging rejection of the idea that India was great before the British ruined it came from Indian nationalists themselves. The leading nationalist thinkers of the 20th century held that Indian society, not British Empire, was mainly responsible for India’s poverty. B.R. Ambedkar, Rabindranath Tagore and M.K. Gandhi articulated this belief in different ways.

Briefly, the argument goes like this. As a society that had invented the idea that the touch of another person could cause pollution, India did not need the British to know how to oppress and degrade other people. British rule, imposed from the outside, unleashed forces of change, weakening this home-grown cruelty. “The Depressed Classes welcomed the British,” Ambedkar said, “as their deliverers from age long tyranny and oppression by the orthodox Hindus.” (Round Table Conference, 1930.)

The migration of millions of Indians from servile labour back in their villages to mines, factories and plantations all over the Empire created the possibility of real freedom. Nationalist thinkers understood these as unintended consequences of the Raj. Such freedom came packaged with the brutality of colonial rule, they believed: The British needed to leave for India to thrive. But they did not think that the British were the root of India’s problem.

By ignoring this message, Tharoor peddles a half truth. “A half-truth, like half a brick, is always more forcible as an argument than a whole one. It carries better,” wrote Stephen Leacock. To say that the legacy of the Raj presents us with a paradox may be a useful idea. But to say that the Raj ruined India “carries better.”

Tirthankar Roy (2012): India in the World Economy from Antiquity to the Present (Cambridge: Cambridge University Press)

Dr. Tirthankar Roy is a professor of economic history at the London School of Economics and Political Science. This review first appeared in the Cambridge Review of International Affairs in 2018. Given the current prominence of skewed accounts of the Bengal Famine, we publish it here by kind permission. Dr. Roy is also the author of How British Rule Changed India’s Economy: Paradox of the Raj (Palgrave, 2019).

Arthur Herman, “Absent Churchill, the Bengal Famine Would Have Been Worse.”