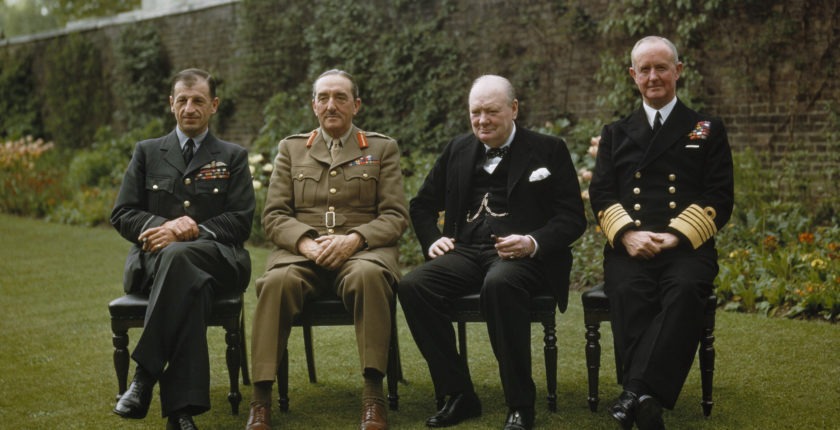 Featured Image: “Bloodstains on his hands” (Tharoor): The Prime Minister with his Chiefs of Staff in the Garden of No 10 Downing Street, London, 7 May 1945 (Wikimedia Commons)

“It will always be a mystery why a few bombastic speeches have been enough to wash the bloodstains off Churchill’s racist hands.” This was how Shashi Tharoor, a successful and popular Indian politician, concluded his recent op-ed for The Washington Post. Tharoor began his piece with the sensational claim that Churchill was a mass murderer in the vein of Hitler and Stalin. One would expect such statements to have a mountain of evidence behind them. There is a mountain of evidence on these and similar issues, but from even the briefest expedition up the slopes one will see Tharoor’s arguments for what they are – revisionist, manufactured history.

By my count, Tharoor makes twenty-two distinct claims about or against Winston Churchill in his 900-word article. I could deal with each of these one at a time, but here I will examine some of the most serious. In so doing, I aim to reveal Tharoor’s allegations against Churchill as unfounded and his historical analysis as embarrassingly sloppy.

Tharoor first strikes by labelling Churchill as a Hitleresque war criminal, in that he habitually employed cruel and inhumane tactics against his and England’s enemies. He cites a letter in which Churchill calls for “absolutely devastating, exterminating attacks by very heavy bombers” against German cities – what we often call “terror bombing.” Tharoor links to a 2015 article in The Telegraph as his source for this quotation, which leads me to believe that he has not read the original letter in full.

If that is the case, he missed some important context, and if he did read it, then he is withholding significant information. Churchill was writing to Lord Beaverbrook, his close friend and Minister of Aircraft Production in his cabinet, two months into his first premiership. His message was not an official directive from 10 Downing St., but rather an evaluation of what it would take to prevent Hitler’s forces from rolling eastward and from growing in strength.

He recognized that Britain’s army could not successfully face Germany’s on the continent, and her fleet could not maintain an impenetrable blockade. Mastery of the air and its destructive potential, in Churchill’s opinion, was Britain’s only hope at that time for victory. He ended his letter with the telling statement: “I send this in order that you may know where I stand, before our discussion, by which I am quite prepared to be corrected.” I reproduce below the entire letter.*

We know that the Royal Air Force would go on to bomb German cities and that hundreds of thousands of civilians would be killed. Relevant, then, is Minister of State Richard Casey’s account of Churchill watching footage of “terror bombing” in June 1943. Part-way through the film, Churchill sat upright and said, “Are we beasts? Are we taking this too far?” Casey replied, “We hadn’t started it, and … it was them or us.” These hardly sound like the words of a man bent on inflicting terror for terror’s sake. Churchill was the only member of the wartime “Big Three” to react in this way.

As further evidence, Tharoor quotes Churchill’s suggestion that airplanes should use “machine-gun fire or bombs” against Irish revolutionaries in 1920. The document that contains that quotation says: “If they can be definitely located and identified from the air, I see no objection from a military point of view, and subject of course to the discretion of the Irish Government and of the authorities on the spot, to aeroplanes being despatched with definite orders in each particular case to disperse them by machine gun fire or bombs, using of course no more force than is necessary to scatter and stampede them.”

Tharoor shies away from quoting the entire document because doing so would reveal Churchill’s prudence in phrases like “subject to discretion” and “no more force than necessary.” You do not have to be a trained historian to recognize Tharoor’s pattern of excerpting and isolating quotations from their context in order to support a sensational claim.

In yet another attempt to label Churchill as a war criminal, Tharoor revives an old charge that has long been dismissed. He quotes Churchill as having said, “I am strongly in favour of using poisoned gas against the uncivilised tribes; it would spread a lively terror.” Without having read the original document, I expected that Tharoor left out something important. I was right. Here is Churchill’s departmental minute from May 1919 in full:

“I do not understand this squeamishness about the use of gas. We have definitely adopted the position at the Peace Conference of arguing in favour of the retention of gas as a permanent method of warfare. It is sheer affectation to lacerate a man with the poisonous fragment of a bursting shell and to boggle at making his eyes water by means of lachrymatory gas. I am strongly in favour of using poisoned gas against uncivilised tribes. The moral effect should be so good that the loss of life should be reduced to a minimum. It is not necessary to use only the most deadly gasses: gasses can be used which cause great inconvenience and would spread a lively terror and yet would leave no serious permanent effects on most of those affected.”

Churchill was arguing for what he believed with good reason to be a more humane ammunition than high explosive shells or highly lethal gas canisters. The “poison gas” he was in favor of using was tear gas, not phosgene or chlorine. He was advocating the very same practice currently employed by police forces around the globe.

It then gets a bit personal for Tharoor. He argues that because Churchill was a racist, Tharoor’s first assumption, and because he especially hated Indians, his second assumption, that he intentionally ignored the plight of millions of Bengalese as they starved to death in 1943, his flawed conclusion. For this he relies upon Madhusree Mukerjee’s book Churchill’s Secret War. However, the real expert on this subject is Pulitzer Prize finalist Arthur Herman, who has written the authoritative work Gandhi & Churchill.

In his review of Mukerjee’s book, Herman notes how the author ignores the actual record of all Churchill, his Cabinet, and the entire British Empire did to aid the starving state of Bengal. Furthermore, Volume 19 of The Churchill Documents, which covers September 1943 to April 1944 and is 2700 pages long, contains a plethora of documentary evidence demonstrating the great lengths the British government went to for the sake of those suffering in India. Hundreds of thousands of tons of grain were shipped from around the globe to Bengal, yet still millions perished. The famine was terrible, but absent Churchill, Herman argues and the record proves, it would have been far worse.

Were Shashi Tharoor the average columnist, one would have read his article, rolled his eyes, and then got on with his work. However, he is a man of serious influence, and that makes his errors important. Distortion and slander are still less excusable in history than in politics.

*Addendum: “I am quite prepared to be corrected”

I have been reading the correspondence leading up to the new aircraft programme about which we are to have a meeting at 5 o’clock this evening. I am very glad to see what a very large measure of agreement has been reached on the policy for the future, subject, of course, to your power to get the raw materials. In the fierce light of the present emergency, the fighter is the need and the output of fighters must be the prime consideration till we have broken the enemy’s attack.

But when I look round to see how we can win the war, I see that there is only one sure path. We have no continental army which can defeat the German military power. The blockade is broken and Hitler has Asia and probably Africa to draw from. Should he be repulsed here or not try invasion, he will recoil eastward, and we have nothing to stop him. But there is one thing that will bring him back and bring him down, and that is an absolutely devastating, exterminating attack by very heavy bombers from this country upon the Nazi homeland. We must be able to overwhelm them by this means, without which I do not see a way through. We cannot accept any lower aim than air mastery. When can it be obtained?

It seems to me very likely that the PE fuze and other methods on the same lines will in the course of the next year greatly increase the effectiveness of fire from the ground against enemy aircraft, and I hope we shall find ourselves scientifically ahead in this respect.

I send this in order that you may know where I stand, before our discussion, by which I am quite prepared to be corrected.

Soren Geiger is director of research for the publication of The Churchill Documents, a sub-series in the official biography of Winston Churchill. This piece was first published on March 27, 2018 by The American Spectator.

120 Years On: Did They Really Kill a Boer at Witbank?
Churchill's Youth, Explore,