This wonderfully readable volume was received with broad praise. Generally positive, though not without criticism, it reflects the theme of the work, “he shall be his own biographer,” but Randolph Churchill adds his own literary style, thoroughly documented with “wonderful grub” provided by his dedicated researchers, including his ultimate successor, Martin Gilbert. The text covers the years from Churchill’s birth in 1874, his education at Harrow and Sandhurst, his early adventures as a war correspondent and sensational escape during the Boer War, his North American lecture tour, and his entry into Parliament. The term “official” does not mean that the biographers were required to stick to an authorized line or avoid certain subjects; rather, that they were allowed unprecedented access to the Churchill archive from which the biography is largely drawn.Buy Now >

The last volume written by Randolph Churchill traces the story of his father’s entry into Parliament as a Conservative, aged twenty-six. An independent spirit and rebel, Churchill is praised for his maiden speech by the Leader of the Opposition. His lifelong collegiality toward the opposite party is soon in evidence. Finally, in 1904, he breaks with the Conservatives over Free Trade, which he ardently supports. “Crossing the floor” to the Liberals with his usual good timing, Churchill holds increasingly important cabinet positions in the great Liberal governments of 1906-14. The volume details his work as a crusading Home Secretary, his key role in reforming the House of Lords, his advocacy of Irish Home Rule, and his arrival at the Admiralty, where he prepares the Royal Navy for war with Germany.Buy Now >

Martin Gilbert, appointed official biographer after Randolph’s death in 1968, now begins an almost day by day chronology of Churchill’s life, concentrating on the first perilous years of World War I. We begin with Churchill leading the Admiralty in early battles with the German fleet, moving to the epic failure of the Dardanelles and Gallipoli campaigns, when Churchill falls from power and is exiled to Belgian trenches as “the escaped scapegoat.” Detailed accounts describe Churchill the warrior, including his efforts to prolong the siege of Antwerp, to develop the expanded use of air power, and to promote his concept for what he calls a “land caterpillar,” soon to be known as the tank. In Flanders, he heads a battalion of Scots Fusiliers—at first unwelcome, later beloved by them all.Buy Now >

This meticulous account of Churchill’s wide-ranging activities toward the end of World War I and its aftermath displays his persuasive oratory, administrative skill, and masterful leadership. Remarkably, only a few years after the disaster of the Dardanelles, Churchill regains a leading position in British political life. He returns to government as Minister of Munitions, becomes Minister for War and Air, and finally Colonial Secretary. Here we read of his minor role in the Versailles Treaty, his critical work demobilizing the army, and his intervention against the Bolsheviks in Russia. Here too we see his actions over the Chanak Crisis with Turkey, the remaking of the Middle East, and the creation of the Irish Free State, when an Irish patriot wrote: “Tell Winston we could never have done without him.”Buy Now >

Here is a vivid, intimate picture of Churchill’s public and private life between the wars—eighteen years of triumph and tragedy. He becomes Chancellor of the Exchequer and defends the government during the General Strike. Out of office in 1929, he travels North America, enters a ten year sojourn in the political wilderness, but soon reaches his zenith as a writer. He fights the India Bill, champions Edward VIII in the Abdication crisis, and warns of the threat of Hitler. Martin Gilbert reveals the extent to which senior civil servants and officers risked their careers supplying Churchill with secret information about German rearmament. ​Finally, war is declared in September 1939 and Churchill becomes First Lord of the Admiralty ​a quarter century since he last held that post.Buy Now >

This precise narrative puts us at Churchill’s shoulder during the most critical years of his life and the world’s, starting with the outbreak of war in September 1939 and ending with the Japanese attack on Pearl Harbor. Martin Gilbert unfolds the early events of World War II: Hitler’s supreme triumph on the continent, Britain’s victories in the air, the London Blitz, the U-boat war, Hitler’s attack on Russia, Churchill’s first personal contact with Roosevelt at the Atlantic Charter conference in August 1941, Pearl Harbor, and the forging of the “Grand Alliance.” In Churchill’s crucial meetings with FDR, Gilbert shows not only how each decision was reached, but what influences lay behind it, carefully developing an intimate account of a unique—if not wholly untroubled—relationship between the two great allies.Buy Now >

This volume runs from the Japanese attack on Hawaii and British Asia in 1941 through V-E Day and beyond to the end of World War II. From the nadir of the war we observe the turning of “the Hinge of Fate,” the battles of Alamein and Stalingrad, the invasions of North Africa, Italy, and finally France. We are there for the great summit conferences, from Moscow in 1942 (“like carrying a large lump of ice to the North Pole”) to Teheran, Yalta, and Potsdam. We witness Churchill’s reaction to the waxing of American and Soviet power, the ring closing around Germany, arguments over invasion routes, the death of Hitler, growing concerns about postwar Soviet expansion, the atomic bomb, and the fateful British election that cost the prime minister his job.Buy Now >

The final volume covers Churchill’s last twenty years, starting with his role as a scintillating Leader of the Opposition (1945-51). We witness his great speeches of resolve and reconciliation at Fulton, Zurich, and The Hague, his efforts for “a final settlement” with the Soviets, and Eisenhower’s determined resistance. We follow Churchill’s return to the premiership (1951-55), his last efforts to secure permanent peace, his resignation, his final words to his colleagues, his declining years, and his death—seventy years almost to the hour of his father’s passing in 1895. ​​Included is the full text of “The Dream,” Churchill’s ​imagined ​encounter with his father​’s ghost​, ​when​ ​he ​describes ​all that has happened since 1895—​never ​revealing the role ​Winston himself played.Buy Now >

History of the Official Biography 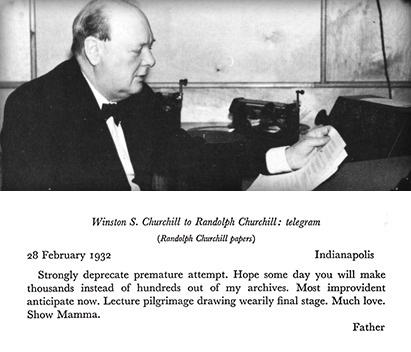 Winston Churchill writes his son Randolph: “I have reflected carefully on what you said. I think that your biography of Derby is a remarkable work, and I should be happy that you should write my official biography when the time comes.”

Martin Gilbert is hired by Randolph Churchill to serve as one of his research assistants. 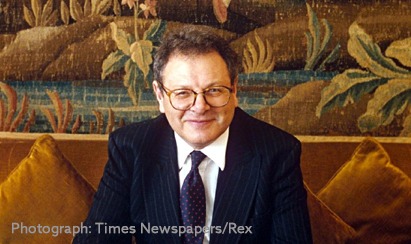 Martin Gilbert is selected to succeed the late Randolph Churchill as the official biographer.

The document volumes, which had ceased appearing in 1982 after The Coming of War 1936-1939, resume publication as The Churchill War Papers, thanks to the kind generosity of Wendy Reves. 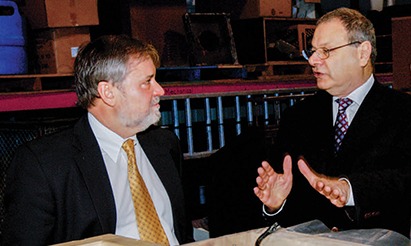 Martin Gilbert accepts a position with Hillsdale College as the William and Berniece Grewcock Distinguished Fellow.

Hillsdale College becomes the publisher of the official biography and undertakes to return every previous volume to print along with the still-unpublished document volumes covering 1942-1965.

The first Hillsdale editions are published, comprising Volume I, Youth 1874-1900, together with its two document volumes. Henceforth, the document volumes will be numbered sequentially.

After forty-four years as official biographer, Martin Gilbert falls ill and is unable to continue his work.

Volume 20, Normandy and Beyond, May-December 1944, is published.

Volume 21, The Shadows of Victory, January-July 1945, is published.