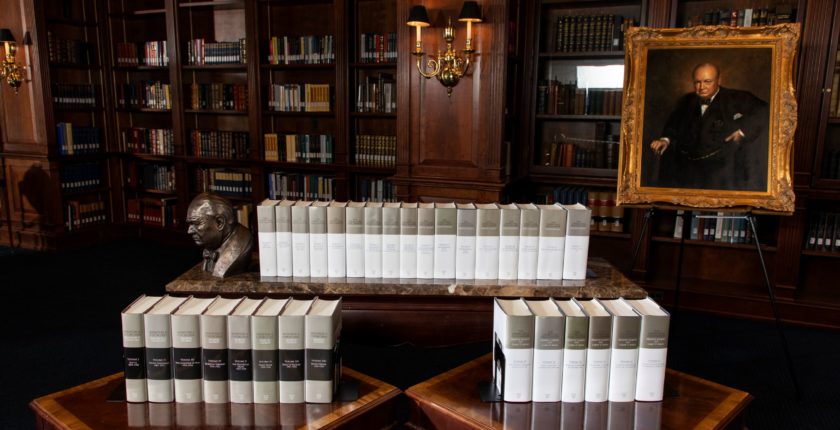 Thus Randolph Churchill telegraphed his father in February 1932. Churchill had, by then, entered the political wilderness. Many contemporaries regarded his tumultuous career as an overall failure. Certainly, they thought, it was almost at an end. Churchill, however, never doubted his own value either as a politician or as an author. And by no means did he discount his value as a subject. His reply was telegraphed the same day: “Strongly deprecate premature attempt hope some day you will make thousands instead of hundreds out of my archives most improvident anticipate now.”

As so often before, Churchill was prescient. Some twenty-three years later Randolph had polished his credentials with a well-received biography of Lord Derby. His father highly approved, and asked him to begin what Randolph would call “The Great Work.” Randolph published the first seven volumes of, what would become one of the most remarkable achievements in biographical history: an opus spanning thirty-one volumes that was fifty-three years in the making.

In the early days of its production, the Official Biography was referred to by reviewers as the last of the great “Victorian biographies.” Since the late 19th century there had been a vogue for substantial, multi-volume political lives. Although the narrative portion of the Official Biography finally ran to eight volumes, Randolph’s original conception was for five. This would have placed it squarely in line with its peers. (“Official” is something of a misnomer: neither Randolph nor his successors were ever asked to write anything but their own words.)

Conceptually there was little to set the Churchill work apart from the Victorians. It was multi-volume, as had been J. A. Spender’s two volumes on Sir Henry Campbell-Bannerman1, John Morley’s three-volume life of Gladstone2, and the Marquess of Crewe’s two volumes on Rosebery.3 Neither did its eventual multiple authors make it unique. When William Monypenny died, George Buckle (editor of The Times) took over to complete the six-volume life of Disraeli.4 Similarly the six volumes on Joseph Chamberlain5 was completed by Julian Amery after the death J.L. Garvin (another editor of The Times).

Although many of these biographies appeared in a single fell swoop, several, like Churchill’s, went through a lengthy gestation period. The life of Disraeli appeared over a span of ten years; the life of Chamberlain over a hefty thirty-seven. Nor is the Churchill biography unique as an act of filial piety. Churchill himself had, of course, set that standard with his two-volume biography of his father, Lord Randolph,6 in 1906.

The singularity of The Churchill Documents

Having noted the similarities, what sets the Churchill biography apart from other “Victorian biographies”? It is, of course, The Churchill Documents (originally called “Companion Volumes”). No other biography, so far as I am aware, has ever offered such voluminous supplementary information to the primary narrative.

Randolph set out the theme of the work: “He shall be his own biographer.” In the two narrative volumes he wrote, the relationship between them and their document companions is very tight. Chapter headings in the latter reference equivalent chapters, and sometimes page ranges, in the former. The reader may easily consume a chapter or so of narrative, then turn to the documents for a detailed expansion of what has just been read.

With Randolph’s death, and the passing of control to Martin Gilbert, this approach changed. The chapter headings were dropped. It became increasingly apparent that The Churchill Documents were taking on a life of their own, independent of the narratives. The document volumes began to follow the narratives by an ever-widening gap of years. This approach made ever more sense.

I have written7 of how the documents have a second quality to their value as research tools. They can also be read in their own right. Not only do they tell their own story, but the voices we get to eavesdrop on increases our understanding enormously. They read as a radio play, where we get to hear history being lived and made in real-time.

The paradox that threatened

At first the time between publication of the narrative and document volumes was close.8 For Volumes 1 and 3 the gap was a year; for Volumes 2 and 4 it was two years. After that, things started to fall apart. The heavy chore was taking its toll on Martin Gilbert, who had to take on other projects. Volume 5 was published in 1976, but the last of its document volumes did not see the light of day until 1982. Volumes 6-8 appeared in 1983, 1986 and 1988, with no document volumes at all.

The fate of the documents seemed grim until 1993, when Wendy Reves, Sir Winston’s friend and former hostess, agreed to fund more. W.W. Norton agreed to publish them. Confusingly entitled The Churchill War Papers, these volumes constituted the companions to Volume 6, Finest Hour 1939-1941. The first two appeared in 1993-94, but third was sidetracked until 2000 by Sir Martin’s workload. The delay caused Mrs. Reves to lose patience and withdraw.

The work was clearly dying on its feet. Heinemann, the British publisher, was no longer interested. Their final Companion Volume 6, Part 3 cost £95, a price beyond most individuals and many libraries. While Norton had priced the War Papers volumes at only $95, the Heinemann versions, identical except for imprint, were half as much again. Churchill scholars were in despair. Supply and demand soon rendered the document volumes formidably expensive. By the mid-90s, Volume 5 Companions were reaching up to $2000 apiece on the secondary market. Norton was reluctant to take on more, even if a sponsor appeared.

And in stepped Hillsdale…

I am not aware of the behind-the-scenes discussions preceding Hillsdale’s decision to rescue “The Great Work.” I hope one day Dr. Arnn may emulate Gilbert by writing his equivalent of In Search of Churchill9 —one of Sir Martin’s finest and most human books. In the meantime, suffice it to say that Larry Arnn had the tools, and he finished the job. That is not to say that he did not give us some heart-stopping moments.

What Hillsdale planned to do, you see, was not merely to produce the missing Churchill Documents for Volumes 7 and 8. The college announced that it would go back to the beginning. It would re-issue every volume published to date in a uniform edition, modestly priced within everyone’s pocketbook.

Those of us waiting for new material realized we’d have to wait awhile. It was frustrating, but in hindsight it was the correct decision. It incidentally broke the hearts of secondhand booksellers around the world. The Churchill Documents 11-13 cost $60 each, compared to thousands for the old companions to Volume 5.

All good things come to those who wait

The first new volume of the Official Biography in fourteen years—The Churchill Documents Vol. 17, Testing Times 1942—appeared in 2014. Generously, Dr. Arnn gave sole editor credit to Sir Martin Gilbert. In the remaining gargantuan volumes, he shares credit with Sir Martin who, while he tragically did not live to see them, had done prodigious work in preparing the documents.

And so it is done, and we the faithful may rejoice. In 2020, the epic work presaged by Randolph Churchill’s 1932 telegram is complete. As individual volumes appeared over the past fifty-three years, they received almost unstinted and unceasing praise. An appreciation such as this can add little to those reactions. The Official Biography is a triumph, a resource second only to the Churchill Archives themselves. Scholars will be mining its pages for years to come.

In his 1974 book The Glory and the Dream,10 one of his most lyrical compositions, William Manchester, concluded: “[It] is imperfect, as all books are. It is true, insofar as diligence and research can establish truth, but it is not the whole truth. No volume, nor even a whole library, can provide that. All an author can offer is a fragment of reality—that, and the hope that it will endure.”

Randolph Churchill, Sir Martin Gilbert, Larry Arnn, and their respective research teams have, across the years, collectively presented us with a towering fragment of reality. It is true. It will endure.

Mr. Turrell has recently retired from a lifetime career in Information Technology. He is a longtime Churchill bibliophile and collector.

10 William Manchester, The Glory and the Dream. Boston: Little, Brown and Company, 1974.

“How Randolph Churchill Began the Longest Biography in History.”