A New Pictorial Documentary With a Twist 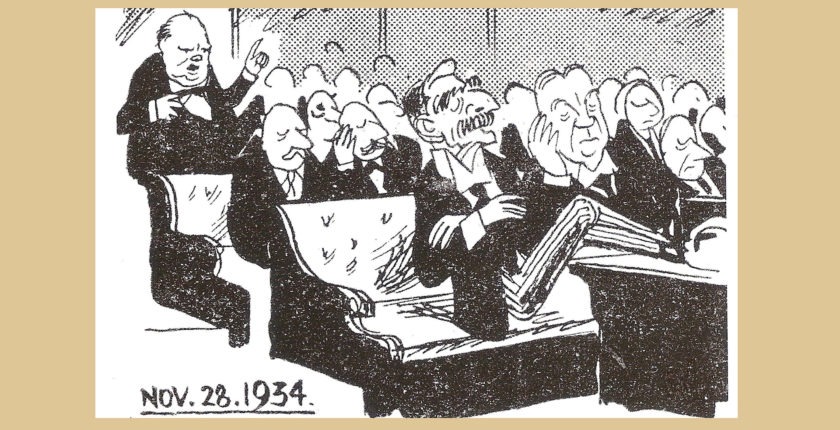 “Voice in the Wilderness,” a seldom-reproduced gem from 1934 by cartoonist Victor Weisz.
It carries WSC’s words to a dozing House of Commons: “Beware—Germany is a country fertile in military surprises.”

Moi, Winston Churchill has three disadvantages for English readers: it’s in French, has nothing new to say about Churchill, and contains several howlers. (West Leicester is “near Birmingham.” Prime Minister Baldwin was ready to negotiate “with the Raj.” Chamberlain was prime minister in 1934. Chequers, the PM’s country retreat, was “bought” from Arthur Lee.) The interest of Moi lies in its wealth of attractive, even intriguing photographs. Arguably, this large-format book on thick glossy paper is really a pictorial album with a connecting text.

The images, some well known, benefit from high-quality, large-size reproduction, including a full page for Mrs. Everest, young Winston’s nanny. Two women connected with Churchill’s youth, Muriel Wilson and Pamela Plowden, also receive full-page treatment. The famous photo of Churchill with the police during the 1911 Sidney Street incident is on a double-page spread. So is the line-up of camels carrying the Good and Great at the pyramids in 1921. Catering to the French public, Moi has a good double-page spread of Churchill and de Gaulle in their open car in Paris on Armistice Day, 11 November 1944.

Graphic designers have done an excellent job isolating Churchill from a larger picture where appropriate. This works to good effect in their enhancing of Churchill while fading out others in the Victory Parade at liberated Lille in October 1918.

Unlike its competitors, Moi includes good photographs of people who were part of Churchill’s entourage, like the painter John Lavery. A young Clementine is shown reading, with words and line drawings Winston’s “your loving pussy cat.” Though their daughters are well served, it is Randolph Churchill who benefits from the most interesting photograph: a large snapshot of the boisterous 25-year-old on New Year’s day 1936, carried on the shoulders of his pals.

Moi also includes superb full-page colour reproductions of paintings. Typical are John Singer Sargent’s magnificent 1905 view of Blenheim; and the portrait of “Sunny,” the 9th Duke of Marlborough, with his wife Consuelo, née Vanderbilt, and their two young children.

This eclectic photo documentary is hardly essential to the Churchill library, but may appeal through its unique visual presentation of fairly obscure subjects.

Dr. Capet is Professor of British Studies, University of Rouen, France. He is the author of a new Dictionnaire Churchill, which promises to be a major reference work.