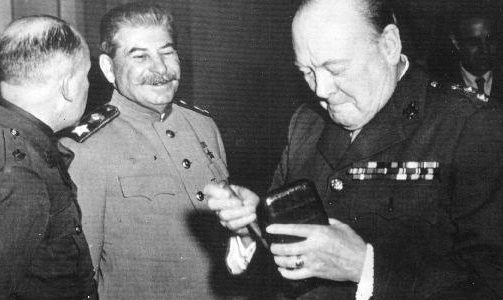 There seems to be a new trend in publishing: serious books in a format once the preserve of books for young people. Last year we had Cate Ludlow’s attractive "I Love Winston Churchill: 400 Fantastic Facts." Now, at the same keen price, we have this title by Richard Wiles in a series which already offers “graphic biographies” of Jane Austen, Cézanne, Leonardo and Shakespeare.
Posted in: 2017, Books,
Read more

Taken together, these two attractive books provide significant contributions to our knowledge of Churchill’s entourage and favourite haunts on the Côte d’Azur from the early 1930s almost until his death.
Posted in: 2017, Books,
Read more

Jonathan Black's book provides some interesting glimpses into Churchill's life and personality in art, though one has to wade through some disorganization to find said moments. With some guidance and revision, his book might have captured a more accurate portrayal of the titan of many moods and many faces.
Posted in: 2017, Books,
Read more

A primer for the study of statesmanship: correcting a century of myth about Churchill, Langworth tells us something of ourselves and the world we live in.
Posted in: 2017, Books,
Read more

Britain’s mercurial First Sea Lord in 1915 was nothing if not vociferous, and often indulged in exaggeration. But for Fisher and the First Lord of the Admiralty, the Rt. Hon. Winston Churchill, the Dardanelles proved to be just that, almost. Here is an insightful inquiry by noted naval historian Christopher Bell of Dalhousie University. His account of the ill-fated Dardanelles campaign is welcome testimony to how Winston Churchill’s career was temporarily ruined by events beyond his control. All the same, the book reminds us that at the time, Churchill’s critics, growing in strength and number, regarded him as a danger to British futures.
Posted in: 2017, Books,
Read more

Although Winston Churchill and George Orwell never met or even corresponded, the American military historian Thomas Ricks has linked them in a book subtitled The Fight for Freedom. He fully accepts that they were “vastly dissimilar men, with very different life trajectories.” Churchill, the older by twenty-eight years, was much more robust, extroverted and oratorically fluent than Orwell, whom Ricks depicts as having a “phlegmatic and introverted personality.” It is true that Orwell named the hero of 1984 “Winston,” and that Churchill enjoyed the book so much he read it twice. But is that really enough of a connection to justify an entire book?
Posted in: 2017, Books,
Read more

Lehrman examines Churchill and Roosevelt through the teams they assembled: advisers, political officials and military leaders who worked for victory even as they argued over war strategy. His is not a history of the war, but an evaluation of people, decisions and events, a victory followed by a lost peace and decades of Cold War. A useful chronology and extensive endnotes, bibliography, and index are complemented by portrait photographs used as chapter headings, and two key appendices: a 1940 Roosevelt fireside chat, and Churchill’s victory speech in 1945.
Posted in: 2017, Books,
Read more