New Views of the “Special Relationship” compiled by Dobson and Marsh 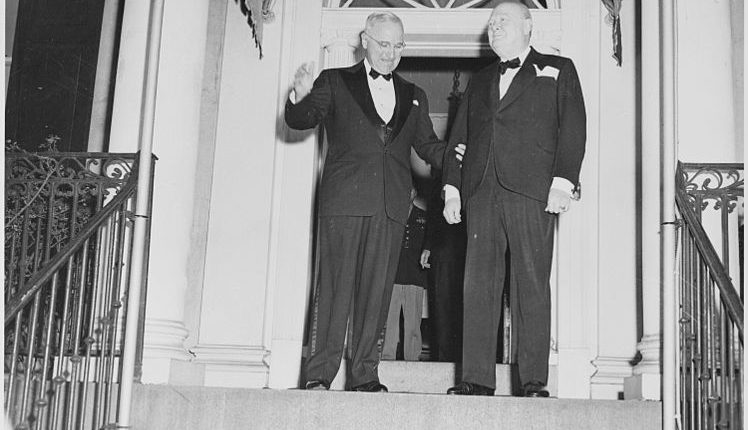 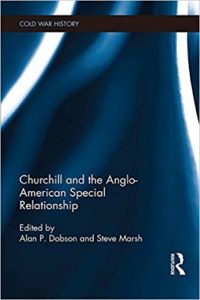 A close Anglo-American partnership was a guiding principle in Churchill’s thinking about international relations. The creation of such a partnership was a central aspect of his long political career. While still a young backbench Member of Parliament, he declared, “it ought to be the main end of English statecraft over a long period of years to cultivate good relations with the United States.” In 1918 he said he hoped the two countries would “act permanently together.”

Between the two world wars Churchill advocated for close bonds between Britain and the United States. After American entry into the Second World War he sought to make these ties real and effective. Churchill’s cultivation of the Anglo-American partnership culminated in his Iron Curtain speech at Fulton, Missouri in 1946. There he referred to the “special relationship between the British Commonwealth and Empire and the United States.” The special relationship (or at least the perception of one) has proven to be an enduring Churchillian legacy.

Origins of the “special relationship”

Alan Dobson and Steve Marsh provide nine essays by historians, political scientists and language specialists. Occasioned by the 70th anniversary of the Iron Curtain speech, it is part of Routledge’s Cold War History series. Dobson and Marsh focus on the speech itself, and the special relationship’s place in the unfolding Cold War. The book specifically eschews “the traditional and well-trodden scholarly focus on functional Anglo-American cooperation.” Instead it includes examinations of memory, identity, the concept of strategic culture, racial discourse and language. An insightful prologue by Warren Kimball (Rutgers University) provides an introductory background to Churchill, the Soviet Union, and the special relationship. Kimball observes that the UK-US relationship became special in World War II. “Boxing in Winston Churchill,” he adds, “is a difficult fit.”

The first section of the volume considers the origins of the Anglo-American relationship, with essays by David G. Haglund (Queen’s University), Alan P. Dobson (Swansea University), Robert M. Hendershot (Grand Rapids Community College), and Srjdan Vucetic (University of Ottawa). Hendershot finds that shared Anglo-American cultural affinities were used by Churchill to “promote an ever-stronger sense of a common civilizational identity, of which…he became the ultimate living embodiment.” The “civilizational identity” of the UK and US proved to be a cushion against “the inevitable ups and downs in the relationship occasioned by specific events, personalities and large–scale changes in the configuration of world economies and military power.”

The interesting contribution by Dobson notes that Churchill travelled to the United States in 1946 with three specific aims. He first wished to provide “a clarion call” about the emerging Soviet threat. He also wanted to promote the passing of an American loan to Britain. But above all, he saw it necessary to “consolidate what he saw as the indispensable foundation for security, prosperity, and peace—a special relationship between the US and the UK—by invoking the cultural and political values that made their people akin.”

Dobson finds that Churchill largely succeeded in these aims. There were of course “strong underlying commonalities” between the US and UK: language, literature, political and social values. But Churchill, Dobson writes, wanted the association for “both sentimental and realpolitik reasons.” He sought to demonstrate that both countries “needed each other to keep world peace and uphold their shared values.” Dobson concludes that the Iron Curtain was much more than “calling the free world to arms.” Churchill’s “expansive” message was to warn about the dangers of “failing to establish a close working relationship.”

The second part of the Dobson and Marsh book looks at Churchill’s legacy in the post-Second World War development of the special relationship. The contributors are Steve Marsh (Cardiff University); Tony McCulloch (UCL Institute of the Americas); Anna Marchi (Bologna University), Nuria Lorenzo-Dus (Swansea University); Sam Edwards (Manchester Metropolitan University); and David Ryan (University College Cork). Ryan’s contribution considers how collective memory resonates. The Iron Curtain speech, he argues, “helped create a Manichean view of international relations that became so potent that it straightjacketed diplomats and politicians alike.” It created a narrative of good against an “alterity of evil.” In the context of the Cold War, this was difficult to overcome and has outlived its original purpose.

Marsh’s chapter considers how Churchill’s ideas about personal diplomacy led to regular summits between the Anglo-American leaders. During Churchill’s second premiership he met with Truman in Washington and Eisenhower in Washington and Bermuda. Thus, Marsh concludes, he established the “the style, regularity and performance of Anglo-American summitry that runs through to the present day.” These summits have become “pseudo-institutionalized,” Marsh suggests. Churchill “set the mould whereby British officials would seek to guide ‘the unwieldy barge’ that was America.” The “pinnacle ambition” of a prime minister was “to establish and manipulate a close relationship with his American counterpart.”

Srjdan Vucetic’s “The Fulton Address as Racial Discourse” interprets the calls for a special relationship in the Sinews of Peace speech as a “way of configuring racialized unity and superiority.” Although he concedes that “racialized language was absent from the speech,” he nonetheless concludes that the speech along with Churchill’s approach to the international affairs and the specific concept of an English-speaking peoples “betray his commitment to racialized world order with Anglo-America at its apex.”

Vucetic takes pains to argue that “the worst of Churchill should take precedence over the best of Churchill.” However, he incompletely reviews the racial issue. Churchill throughout his career asserted that all peoples enjoyed the same individual rights, and that it was the mission of his country to protect those rights. This contention is not broached by Vucetic. More detailed discussions of Churchill and race are linked below.

To Suez and beyond

McCulloch considers the special relationship from Fulton to Suez through the diplomacy of British ambassadors in Washington. The Iron Curtain speech, he writes, was a “brilliant argument” for the continuation of the wartime relationship given the Soviet threat. The speech attracted much attention, including a strong reaction from the elements in American public opinion that were always uneasy about American support for British colonialism. To this element it “highlighted” the “spectre of British colonialism and Churchill’s image as a die-hard imperialist.” British ambassador Lord Halifax supported and echoed Churchill in his own speech a month after Fulton. McCulloch believes “he rivalled Churchill in devotion to the Anglo-American ideal.”

McCulloch also describes the so-called Potomac Charter, agreed to by Eisenhower and Churchill in June 1954. “In many ways,” he says, it was “the fulfillment of Churchill’s mission to revive the Anglo-American ‘special relationship.’” It openly recognized the common principles underlying British and American foreign policy. The Suez Crisis, a “chastening experience,” soon tested those common principles. But the relationship quickly recovered. By Churchill’s last visit to the White House in 1959, the special relationship was “alive and well.” But the US was now the dominant partner.

These scholarly essays provide detailed observations into the postwar special relationship from various viewpoints. As a whole, they offer insightful and original contributions to the literature.

Bradley Tolppanen is Professor of Library Services, History Librarian and head of Circulation Services at Eastern Illinois University. He is the author of a definitive study, Churchill in North America, 1929. He also maintains an excellent Blog on Winston Churchill.