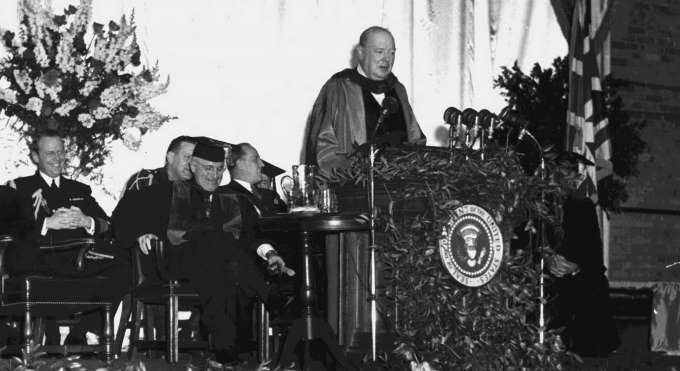 Introduction, by Professor Steve Marsh, Cardiff University (321-25): In considering the evolution of international relations and the concepts behind them, we should consider two important points: Churchill’s opinion of it at the time as the most important speech he had ever delivered; and how it became embedded in Cold War historiography, achieving a durable place in collective memory.

“Science, Democracy and Peace: Churchill on Society and Statesmanship in the Fulton Address and Beyond” by Marjory Jeffrey, Ph.D. candidate, Baylor University (325-39): An interesting Churchill quotation, which parallels the Fulton speech, appeared seven years after the speech as the theme of Triumph and Tragedy, Churchill’s final volume in his memoir, The Second World War: “How the Great Democracies Triumphed, and So Were Able to Resume the Follies Which Had So Nearly Cost Them Their Life.” At Fulton Churchill had similarly said: “Last time I saw it all coming and I cried aloud to my own fellow-countrymen and to the world, but no one paid any attention.” Churchill was advocating wise statesmanship. Fulton was the apotheosis of preoccupations, which began in Churchill’s 1924 essay, “Shall We All Commit Suicide?” and ended with his hope for peace in the shadow of the H-bomb in his final 1955 speech to Parliament. Churchill’s “international relations theory cannot be simply identified as either realist or idealist in the modern sense: his strategic goal of peace can be reached only through a complex combination of friendship, diplomacy, and strength.”

“Toward Cold War Thinking: Editorial Reactions to Churchill’s Iron Curtain Speech in North Carolina Newspapers,” by Ralph B. Levering, Professor Emeritus, Davidson College (340-49): Compared to the well-known reactions of major national newspapers, those of the small North Carolina cities like Charlotte, Winston-Salem, Greensboro, Durham, and Raleigh are terrae incognitae, and yet a welcome piece of micro-history. Conventional analyses of the reaction usually concentrate on the world press, including major U.S. newspapers. Here we consider much smaller organs, one liberal, one conservative and three moderate: all their editorials in the days and weeks following the speech. In practice, small-town and rural America was unanimous in judging Churchill’s idea of an Anglo-American alliance unacceptable so soon after the end of the war. “Neither America’s top public officials nor most of the nation’s news media [including the North Carolina newspapers] were ready in the spring of 1946 to give up hope for a stable, mutually advantageous post-war settlement with the Soviet Union.”

“Reluctant Partners: African Americans and the Origins of the Special Relationship,” by Clive Webb, Professor of Modern American History, University of Sussex (350-64): Noting the absence of black-owned newspapers in Levering’s survey leads to an unusual perspective on the Fulton speech: the distrust most black Americans entertained towards Imperial Britain generally and Churchill, perceived as a racist. Their response to the speech was rancorous, often scathing. What aroused the anger of that community was not the Iron Curtain analogy but the proposal for close Anglo-American relations. The National Association for the Advancement of Colored People (NAACP) led a chorus of furious opposition to what it interpreted as an attempt by the British to reestablish the prewar imperial order through the surrogate of the United States. “Churchill’s decision [it was not his decision] to speak at a college that practised Jim Crow policies [blacks were not then admitted] underlined the connection between the domestic racism of the United States and the overseas exploitation of the British.” Incidentally, the NAACP and similar organisations denounced Britain’s ruling Labour Party with equal vehemence.