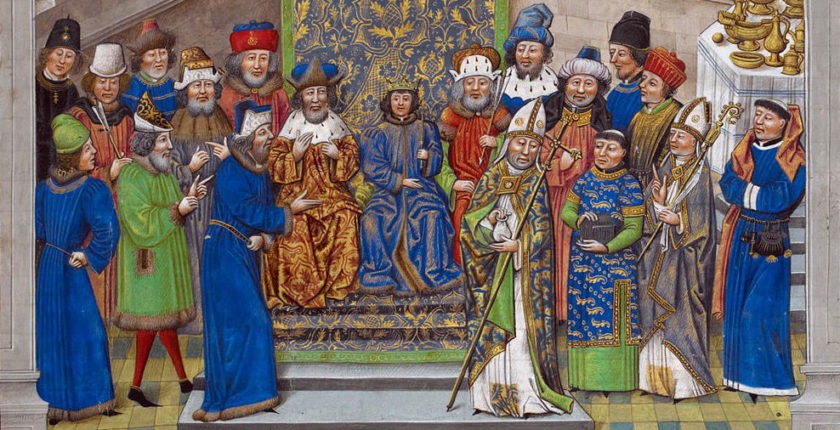 We are asked: “Churchill quoted Shakespeare’s famous lines, ‘This scepter’d isle,’ in one of his speeches. They are the words of John of Gaunt, Duke of Lancaster, from Richard II, Act 2, sc. 1. Could you direct me to the speech?”

Churchill knew his Shakespeare and had a near-photographic memory. Darrell Holley’s Churchill’s Literary Allusions tells us he alludes to Shakespeare more than any other English author. King John, Richard III and Hamlet are his most frequent references. Henry V also moved and inspired him. He also closely read Richard II, generally accepting Shakespeare’s portrayal of his cruelty and vindictiveness. (Alas, Holley’s book enjoyed only one brief printing and is now rare and expensive. It is a standard work and richly deserves reprinting.)

Churchill quoted the “Scepter’d Isle” passage in part, but not in whole. It first appeared in his article, “Let’s Boost Britain,” in the weekly Answers, for 28 April 1934. (His topic has considerable relevance at present.) Answers was one of the most obscure periodicals to which Churchill contributed. Fortunately, the late Michael Wolff, one of Randolph Churchill’s assistants on the official biography, scoured its pages to compile The Collected Essays of Sir Winston Churchill (1975). The essay, thus reappeared, is in volume IV, Churchill at Large. It begins:

This week we celebrate St George’s Day, which is also Shakespeare’s Day, who wrote the noblest tribute ever penned to this England of ours:

This royal throne of kings, this scepter’d isle,
This earth of majesty, this seat of Mars,
This other Eden, demi-paradise …
This happy breed of men, this little world;
This precious stone set in the silver sea …

The words still thrill like the blast of a trumpet; thrill, I suspect, the Scots and Irish and Welsh among us as well as the English. They move us not only because they are beautiful, but because they are true—as true today in the reign of King George the Fifth as they were under Royal Elizabeth.

Ours is a wonderful island. Taken on the whole, it is the most wonderful island in the world, and we are its inheritors. But inheritance carries with it responsibilities. We are in the position of trustees of this land of our forefathers. How are we discharging our stewardship?

What is being done to our island? Is it becoming more beautiful, more charming? Is it gaining continuously from the modern age and yet preserving all that has come down from the past?

Lest we digress, I will stop quoting “Let’s Boost Britain,” but warmly recommend it to anyone doubtful of Britain’s past, and potential future.

Churchill however was not finished with John of Gaunt, famous scion of the House of Lancaster. Ultimately, he and others deposed Richard II and installed Gaunt’s son Henry IV. Another quotation occurs in The Birth of Britain, the first volume of Churchill’s History of the English-Speaking Peoples. Writing of Gaunt’s death, Churchill refers to him as “time-honoured Lancaster.” That phrase is from Richard II, Act 1, sc. 1.

How closely Churchill read and absorbed Richard II is suggested by another deathless line he deployed at least twice. In negotiating her husband’s exile, Queen Isabel begs leave to go to France. Knowing they might then raise an army and return, the Earl of Northumberland exclaims: “That were some love, but little policy.” (Richard II, Act V, sc. 2.)

Churchill remembered that turn of phrase. In 1916, disgraced over the Dardanelles, he was fighting at the front. His wife Clementine, and his friend Archibald Sinclair, urged him to stay there until the time was ripe for his return to politics. Anxious to be back in the thick of debate, Churchill wrote Sinclair: “I can almost hear you and Clemmie arriving by the most noble of arguments at the conclusion that I must inevitably stay here till the day of Judgement: NO NO – ‘That were some love, but little policy.’”

Twenty years later, writing his Life of Marlborough, Churchill described one of Marlborough’s enemies: “Why, then, should he give up his weapon and the chance of setting a hostile House of Commons loose upon him? ‘That were some love, but little policy.’”

Interestingly, in both cases, Churchill put Shakespeare’s words in quotes but did not cite the author. That was a time when every English school child knew Shakespeare thoroughly. He simply didn’t have to.

Churchill’s best-known line from Richard II comes in The Gathering Storm, his first volume of Second World War memoirs. He writes of his visit to the fleet after becoming First Lord of the Admiralty in 1939 for the second time, Uniquely, he had last held that office almost exactly twenty-five years earlier…

My thoughts went back a quarter of a century to that other September when I had last visited Sir John Jellicoe and his captains in this very bay, and had found them with their long lines of battleships and cruisers drawn out at anchor, a prey to the same uncertainties as now afflicted us. Most of the captains and admirals of those days were dead, or had long passed into retirement… It was a strange experience, like suddenly resuming a previous incarnation. It seemed that I was all that survived in the same position I had held so long ago …. I motored from Loch Ewe to Inverness, where our train awaited us. We had a picnic lunch on the way by a stream, sparkling in hot sunshine. I felt oddly oppressed with my memories.

“For God’s sake, let us sit upon the ground
And tell sad stories of the death of kings.”

Once again, Churchill didn’t bother to reveal the source of his quotation. In that time a grammar school education was truly comprehensive, and not only in Britain. Churchill simply assumed that all his readers would know.

“Mirrored in the Pool of England,” lecture by Richard M. Langworth