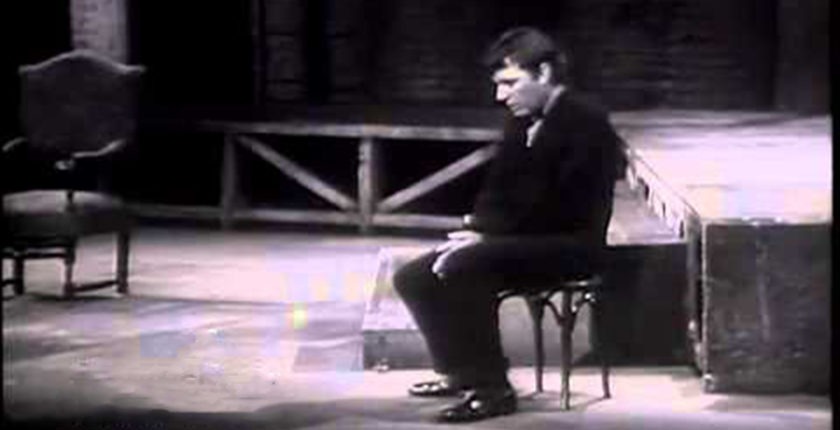 Following on to his two part essay comparing Churchill and Lincoln, Lewis Lehrman considers Shakespeare’s influence on the two statesmen. (For Churchill’s use of Shakespeare quotes in his writings and speeches, see “Churchill and Shakespeare”). Readers may also wish to explore Mr. Lehrman’s Lincoln-Churchill website.

In 1849, Abraham Lincoln sought to be federal commissioner of lands. He lost that post and was offered the territorial governorship of Oregon as a consolation prize. Under the influence of his wife Mary, Lincoln turned it down. When a congressman from Chicago later suggested that his decision had been providential, Lincoln replied: “Yes, you are probably right,” adding, “I have all my life been a fatalist. What is to be, will be; or, rather, I have found all my life, as Hamlet says, ‘There’s a divinity that shapes our ends, Rough-hew them how we will.’”1

Like Churchill, Lincoln loved poetry in general and Shakespeare in particular, along with the Scottish poet Robert Burns. In 1860, after seeing busts of Shakespeare and Burns at the offices of the Chicago Record, Lincoln remarked: “They are my two favorite authors, and I must manage to see their birthplaces some day, if I can contrive to cross the Atlantic.”2Alas the time never came.

Lincoln “read Shakespeare more than all other writers together,” wrote his aide John Hay. Like Churchill, he often read aloud. In August 1863, Hay accompanied the President on one of his frequent visits to the Soldiers’ Home (now the Armed Forces Retirement Home): “He read Shakespeare to me, the end of Henry VI and the beginning of Richard III, till my heavy eyelids caught his considerate notice & he sent me to bed.”3 Lincoln spent many a summer evening at the Home: “He would there read Shakespeare for hours with a single secretary for audience. The plays he most affected were Hamlet, Macbeth and the Histories; among the latter, he never tired of Richard II. The terrible outburst of grief and despair into which Richard falls in the third act had a peculiar fascination for him; we have heard him read it at Springfield, at the White House and the Soldiers Home.” This was also a favorite passage of Churchill, who quoted its first two lines in his World War II memoirs, recalling his 1939 visit to the Fleet. It was in his second stint as First Lord of the Admiralty; Churchill was strangely moved that despite the familiar naval surroundings and ceremony, all the great admirals he had known were dead or retired:

For God’s sake, let us sit upon the ground
And tell sad stories of the death of kings;
How some have been deposed; some slain in war,
Some haunted by the ghosts they have deposed;
Some poison’d by their wives: some sleeping kill’d;
All murder’d: for within the hollow crown
That rounds the mortal temples of a king
Keeps Death his court and there the antick sits,
Scoffing his state and grinning at his pomp,
Allowing him a breath, a little scene,
To monarchize, be fear’d and kill with looks,
Infusing him with self and vain conceit,
As if this flesh which walls about our life,
Were brass impregnable; and humour’d thus,
Comes at last, and with a little pin
Bores through his castle wall, and farewell king!4

In Shakespeare Lincoln found solace and contentment. While plotting the capture of Norfolk, Virginia, in May 1862, he repeated the speech of Queen Constance from King John. The Queen’s lament about her son apparently reflected Lincoln’s own grief about the death of his son three months earlier. After he ended, Lincoln said: “Did you ever dream of some lost friend and feel that you were having a sweet communion with him, and yet have a consciousness that it was not a reality?…That is the way I dream of my lost boy Willie.”5

Attorney Henry Clay Whitney wrote that while “Shakespeare was to him more than to the average great man…he never, to my knowledge, did quote either from Shakespeare or Byron, except in the circles of his close friends.”6 Macbeth was Lincoln’s favorite play, he told Charlotte Cushman, who played Lady Macbeth at Grover’s Theater in October 1862,7 where President and Mrs. Lincoln had attended with their son Tad. Adolphe Pineton, Marquis de Chambrun, recalled that on 9 April 1865, sailing up the Potomac to Washington from newly-captured Richmond, Lincoln “read aloud to us for several hours. Most of the passages he selected were from Shakespeare, especially Macbeth. The lines after the murder of Duncan, when the new king falls prey to moral torment, were dramatically dwelt on. Now and then he paused to expatiate on how exact a picture Shakespeare here gives of a murderer’s mind when, the dark deed achieved, its perpetrator already envies his victim’s calm sleep. He read the scene over twice.”8 Was this a portent? Only six days later, the President would himself fall prey to murder.

As prime minister in 1940, Winston Churchill was soon confronted with the German blitz of London. On 15 October, nearly 500 German planes dropped 70,000 firebombs on the city. In order to save buildings, Churchill decided that “To the Basements” must be replaced by “To the Roofs.” London was mobilized to fight nightly fires and to save such symbols as St. Paul’s Cathedral. Churchill understood the wisdom of Shakespeare’s King Henry V, who said before the battle of Agincourt that “all things be ready if our minds be so.”

Henry V was a recurring theme in those better-read times. General Ismay heard one parachute commander say as he entered his plane: “And gentlemen in England now a-bed, Shall think themselves accurs’d they were not here.”9In the same act, King Henry tells his soldiers: “Old men forget: yet all shall be forgot, But he’ll remember with advantages, What feats he did that day….” In early February 1943, Churchill paraphrased those words to soldiers of the Eighth Army, who had defeated Rommel: “After the war, when a man is asked what he did, it will be quite sufficient for him to say, ‘I marched and fought with the Desert Army.’”10In a staff memo in July 1943, Churchill closed with a quotation from Act IV of Julius Caesar:

There is a tide in the affairs of men,
Which taken at the flood, leads on to fortune.
Omitted, all the voyage of their life
is bound in shallows and in miseries.
On such a full sea are we now afloat.
And we must take the current when it serves or lose our ventures.11

Whereas Lincoln found relaxation in the theater, Churchill more often sought the cinema, primarily on Saturday nights at Chequers. When a film version of Henry V was shown there in November 1944, Churchill “went into ecstasies about it.”12 The Prime Minister did not often attend theater during the war, but he and Clementine did see Richard III on 4 October 1944.13 In the 1950s he was a more frequent attendee. His encounter with Richard Burton in the title role of Hamlet is well known. From his front row seat, Churchill recited Hamlet’s lines right along with Burton. “I could not shake him off,” Burton said. “I tried going fast, I tried going slow; we did cuts. Every time there was a cut an explosion occurred. He knew the play absolutely backward; he knows perhaps a dozen of Shakespeare’s plays intimately.”14Churchill had a near-photographic memory. His knowledge of Shakespeare dated back to Harrow School where, at age 13, he narrowly lost a contest to learn a thousand lines of the Bard.15

Lincoln was also a connoisseur of Hamlet and a critic of its actors. “There is one passage of the play of ‘Hamlet’ which is very apt to be slurred over by the actor or omitted altogether, which seems to me the choicest part of the play,” he told the artist Francis Carpenter. “It is the soliloquy of the king, after the murder. It always struck me as one of the finest touches of nature in the world.” Ironically, Lincoln said that before attending a performance of Hamlet by the actor Edwin Booth—the brother of John Wilkes Booth, his assassin.16

During World War II, Britons usually welcomed Churchill with a standing ovation on his rare appearances at the theater. But in the American Civil War some criticized Lincoln for “frivolity” when the affairs of the nation were so critical. William Stoddard recalled one night when the President sat in his box, awaiting the curtain: “…there were present an abnormal number of opera glasses, all of which from time to time were aimed at our box….One of the President’s oversensitive critics had a seat away back toward the entrance, and his soul, if he had one, was moved within him. He arose on his feet and shouted out something like this: ‘There he is! That’s all he cares for his poor soldiers.’

“The President did not move a muscle, but another party, in uniform, was instantly up, declaring vociferously, ‘De President haf a right to his music! Put out dot feller! De President ees all right! Let him haf his music!’ There was a confused racket for a few seconds, and then the luckless critic went out of the theater, borne on the strong arms of several boys in blue who agreed with their German comrade as to the right of Abraham Lincoln to as much theatrical relief as they themselves were having.”17

A Shakespearean critic equal to Churchill, Lincoln freely complained if the Bard’s work was presented badly. After a performance of Richard III  he remarked that the opening is “often entirely misapprehended. It is quite common for an actor to come upon the stage, and in a sophomoric style, to begin with a flourish:

“Now is the winter of our discontent
Made glorious summer by this sun of York;
And all the clouds that lour’d upon our house
In the deep bosom of the ocean buried,

“Now, this is all wrong,” Lincoln continued. “Richard, you remember, had been, and was then, plotting the destruction of his brothers, to make room for himself. Outwardly the most loyal to the newly crowned king, secretly he could scarcely contain his impatience at the obstacles still in the way of his own elevation. He appears upon the stage, just after the crowning of Edward, burning with repressed hate and jealousy. The prologue is the utterance of the most intense bitterness and satire.”18

Lincoln and Churchill both intimately knew bitterness and satire. But they rose above it. As Hamlet said to Horatio, there was a divinity that shaped their ends.

Lewis E. Lehrman, co-founder of the Gilder Lehrman Institute of American History, is author of Lincoln at Peoria: The Turning Point (Stackpole, 2008) and Lincoln “by littles” (TLI, 2013). An earlier version of this essay appeared in greenwich.time.com on 12 February 2016.

Featured Image: Burton as Hamlet. From his front row seat, Churchill recited the lines right along with him: “I could not shake him off.” (For the soliloquy see http://bit.ly/2aiEZML).

7 See Lisa Merrill, When Romeo Was a Woman: Charlotte Cushman and Her Circle of Female Spectators (Ann Arbor: University of Michigan Press, 1999), 227-31.

11 Ibid., 442. R. Crosby Kemper wrote: “While [Churchill’s] wartime speeches echoed the great speeches at Harfleur and Agincourt of Shakespeare’s Henry V, Churchill’s real sympathy was with the great opponent of the English, Joan of Arc. Far from the ‘hollow empire’ of Henry V, with its wasteful search for military glory, was her noble simplicity, from which the whole conception of France seems to have sprung and radiated…” R. Crosby Kemper, Winston Churchill: Resolution, Defiance, Magnanimity, Good Will (Columbia, Mo., University of Missouri Press, 1995), 25.