The Churchill Project - Hillsdale College > Articles > Books > 2017 > “Damn the Dardanelles, they will be our grave.” – Admiral Fisher 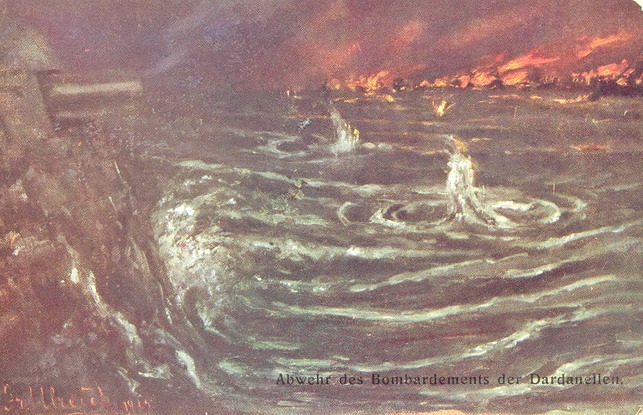 Featured Image: A rather fanciful German painting of the Turkish forts firing at Allied attackers.

Britain’s mercurial First Sea Lord in 1915 was nothing if not vociferous, and often indulged in exaggeration. But for Fisher and the First Lord of the Admiralty, the Rt. Hon. Winston Churchill, the Dardanelles proved to be just that, almost. Here is an insightful inquiry by noted naval historian Christopher Bell of Dalhousie University. His account of the ill-fated Dardanelles campaign is welcome testimony to how Winston Churchill’s career was temporarily ruined by events beyond his control. All the same, the book reminds us that at the time, Churchill’s critics, growing in strength and number, regarded him as a danger to British futures. 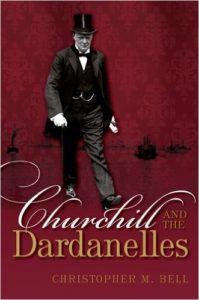 It was Lord Kitchener, Britain’s Secretary of State for War, who suggested a “demonstration” in order to buttress sagging Russian positions against the Ottoman Turks. Churchill took up the challenge. He was the guiding force in the plan to sail through the Dardanelles to Constantinople “by ships alone,” knocking the Ottoman Empire out of the war. Thus he bore the main brunt of relentless attack by press and Parliament alike. By late May 1915, Churchill’s career seemed to be at an end. But that was not the end of the story.

Was Churchill the source of his own misfortunes? He certainly did not think so. Still, after the loss to mines of many Allied ships in the lower Straits, the naval attack was suspended. Then the fruitless April landings on the Gallipoli peninsula led to withdrawal of Allied forces in December and January. All attempts to wage war against the Ottomans in this immediate area were finished. British operations focused elsewhere, in Mesopotamia and in Salonika.

The Dardanelles scheme, promoted by Churchill as an alternative to “chewing barbed wire” on the Western Front, had failed. Distinguished British historians, including Basil Liddell Hart, have stated that had the campaign been carried to a successful conclusion, the war would have shortened. Arthur Marder, the Royal Navy authority, was perplexed that the effort was not prosecuted when the margin for victory was so near at hand. But Tim Travers has shown in his recent book Gallipoli that the Ottomans had a more powerful force backed up by German military expertise than the British had realized. He also shows that General Sir Ian Hamilton, like Churchill, fought strongly in the subsequent Dardanelles and Gallipoli inquiries to clear his name, at some cost of veracity.

In May 1915 Churchill was sacked from the Admiralty, following Fisher’s resignation over Churchill’s overbearing actions and disregard for professional advice. From that moment Churchill sought to redeem himself in the public eye. He fought hard for an official inquiry with the full disclosure of documents. Professor Bell notes that Churchill believed Asquith, the Prime Minister, did not want an inquiry, or publication of documents. As Churchill wrote privately, Asquith knew “I had a murderous case against Kitchener…. My documents would have been useful and effective weapons to destroy Kitchener’s influence and the P.M. could have cast the responsibility for publication on me.”

But in June 1916, Kitchener was removed from the scene. A cruiser in which he was sailing, HMS Hampshire, struck a mine and went down with heavy loss of life, including Kitchener himself. He was headed to Archangel to give moral and military assistance to Imperial Russia. Now the famed military figure—the man who had suggested forcing the Dardanelles without the Army, was no more. His hero’s death deprived Churchill of a target: one can’t libel the dead.

Later, however, the Dardanelles inquiry proceeded. The inquiry’s interim report showed Kitchener’s complicity, but turned most its attention on other principal characters. Churchill did not come away unscathed. Subsequent histories have also shown him not to be faultless.

Among the many fine points of this splendid historical investigation are the author’s three chapters on the Dardanelles Commission. Bell carefully reconstructs the arguments and questions in a trilogy: the preliminaries, the naval staff, and what he calls “an installment of fair play.” Churchill defended himself handsomely, as one would expect. But those who had observed his past mistakes did not universally subscribe to the positions he so eloquently stated.

In his final pages, the author focuses on Churchill’s decades-long battle to set the record straight. His memoir, The World Crisis, was a partisan attempt to clear his name. Then again, Churchill always said that his war volumes were meant to present his case, his record as he saw it. He always wanted to be “in command of history.” Few if any politicians who had suffered such failure and humiliation as Churchill over the Dardanelles enjoyed the luxury of defending themselves.

The naval campaign and the subsequent land misadventures that brought so great and tragic a failure have been told more thoroughly elsewhere. But the nuances of Churchill’s role are admirably told here. It bears to keep in mind a conclusion of Robert Rhodes James in his Churchill: A Study in Failure (1970). The statesman’s personal characteristics, James wrote—his having become persona non grata for all political parties—ostracized him from the war’s direction. It was too bad, because they could have used his drive and imagination.

Churchill never understood the roots of alienation that had taken him out of the limelight. His despondency over his loss of the Admiralty, described so well by his wife, took him to new fields. He learned to paint to relieve his anxieties. Then he served honorably as an officer on the Western Front. All the while he thought of ways to redeem himself in the public eye. He used his pen (arguably mightier than his sword) to return to political favor. Only David Lloyd George was prepared to readmit him to government, as Minister of Munitions in 1917. Even then Churchill was barred from the top circle of power.

Odd circumstances finally brought him back, ultimately to the pinnacle. Ironically, the rise and early victories of the Axis powers gave Churchill new life as a war leader. And then, as A.J.P. Taylor said so handsomely, he became the saviour of the nation.

Barry Gough is author of Churchill and Fisher: Titans at the Admiralty Fighting the First World War (2017).