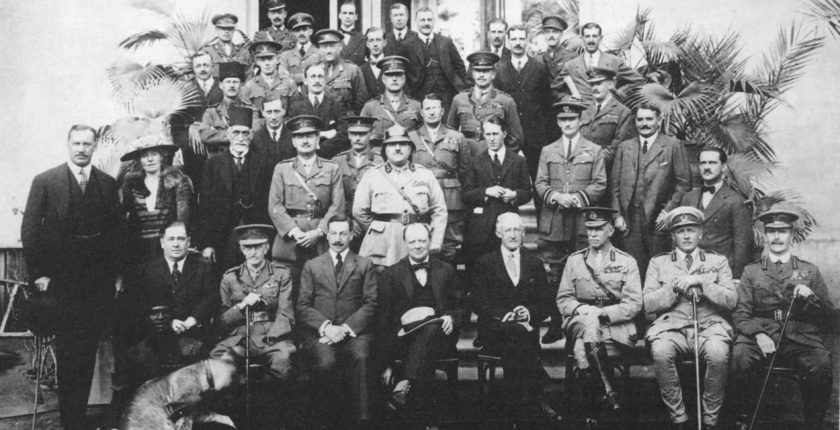 On critical years in the life of Winston Churchill there is little debate. Of course, as he said, “Nothing surpasses 1940.” But there are other years leading up to that pinnacle, full of experience, learning and achievement. Robert Pilpel named 1895—Churchill’s first visit to America—as the beginning of “stunning achievements and glorious epitomes.” David Stafford, famed for his books on Churchill and secret intelligence, now considers 1921. It’s a wonder no one has thought of it before. It was filled with crucial events—political and personal—that critically affected Churchill’s later life.

Oblivion or Glory begins with a train accident in Wales that killed the unmarried Lord Herbert Lionel Vane-Tempest. His cousin Winston inherited his valuable Irish estate. This unexpected windfall, combined with the first public exhibit and sale of his paintings and a lucrative contract to write his First World War memoirs, removed Churchill’s usual financial strains. It would lead him to buying Chartwell in 1922.

When the year began, as Secretary of State for War and Air, Churchill was still trying to recover from blame for the 1915 Dardanelles military disaster. He was enmeshed in volatile efforts to destroy Soviet communism in Russia. He labored to contain labor unrest in Britain and rebellions abroad. Churchill wanted a change of pace. With Prime Minister Lloyd George’s approval, he moved to the Colonial Office in February, becoming administrator of the largest empire in world history. 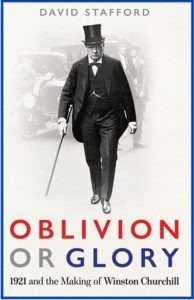 Stafford offers a vivid understanding of what made Winston Churchill tick. Take for example his picture of WSC at the dedication of London’s Cenotaph, built to commemorate the Great War dead: “Of those standing beside him, he was the only one to have served in the trenches, where he had witnessed the real face of war. ‘Filth and rubbish everywhere, graves built into the defences and scattered about promiscuously, feet and clothing breaking through the soil, water and muck on all sides.’”

Writing of the troops sent out of those trenches to certain slaughter, Churchill observed: “If only the Generals had not been content to fight machine gun bullets with breasts of gallant men….” No one, reading this, can fail to appreciate Churchill’s fear of war—and why he strove frequently to avoid it.

Other personal revelations show how Churchill was first captivated by the French Riviera. Surprisingly—she disliked it in later life—Clementine was also enraptured. She was judgmental about his womanizing friends F.E. Smith and Lord Beaverbrook. (He was not.) But she remained devoted to him, and he to her.

Painting was in his soul by now, Stafford writes. WSC admired and tried to emulate the modernist masters, Manet, Monet and Cézanne. Painting consumed him, offering blessed respite from worry and care, and there was much of both in 1921. The Churchills reeled under quadruple losses: Clementine’s brother Bill, Winston’s mother, their dear friend Ernest Cassel. Then came the culminating loss of their 2 1/2-year old daughter Marigold, causing Clementine to shriek “like an animal in pain.” Somehow they coped: as good an example of courage as any marriage could have.

On the military front, Stafford offers important details on the reasoning behind the creation of the Singapore naval base. Twenty years on, it would fall to Japan, in what Churchill would call the greatest British military disaster in history. In 1921 everybody believed it would be the Empire’s impregnable Pacific firewall. Less impregnable now was the once-dominant Royal Navy. Stafford shows how the Washington Naval Conference proved that the Two-Power Standard was done. No longer could Britain’s fleet defeat the next two strongest fleets combined. In future Britain would count more on the U.S. Navy. We learn how Churchill realized and accepted this reality, and how it fostered his idea of a “special relationship” with America.

The Irish Treaty was another achievement of Churchill and others in 1921. Stafford covers it thoroughly, with new angles. More than any previous historian, he records the key involvement of Churchill’s painter friends John and Havel Lavery. Of Irish descent and pro-independence, the Laverys formed a bridge to Sinn Fein’s Michael Collins. Insiders believed the Treaty would never have come off without their efforts, Hazel’s especially.

Among the fraught perils of 1921 was the Middle East. (The Middle East perennially seems a fraught peril.) As Colonial Secretary, Churchill convened the Cairo Conference to rearrange the former Ottoman Empire, installing Arab kings in Jordan and Iraq. The conventional take is that they were puppets of avaricious imperialists. Stafford shows this to be simplistic. France certainly hoped for colony-grabbing. Britain was far less enthusiastic, caught between intractable pan-Arabists like Lawrence and Gertrude Bell, Zionists like Chaim Weizmann, and anti-Semitic or anti-Arab British politicians.

Long after the Cairo Conference had drawn compromise borders of new but fractious Arab nations, the struggle continued. During the summer, Weizmann demanded that Britain to guarantee a Jewish majority in that part of Palestine that is now Israel (the rest being Jordan). Simultaneously Churchill faced a delegation of Arab Christians and Muslims (yes, together!). They demanded repeal of the Balfour Declaration of a “Jewish National Home.” Both sides resisted Churchill’s offers of compromise, Stafford writes…

He confessed to the Cabinet that the situation in Palestine was causing him “perplexity and anxiety. The whole country is in ferment,” he lamented, “both Arabs and Jews are arming, ready to spring at each other’s throats.” He could barely conceal his exasperation with the Palestinian demands. “I do not think things are going to get better, but rather worse,” he told the Cabinet.

Finally Churchill concluded that the only affordable way to maintain order in Mesopotamia—which he called “Messpot”—was air power. Here Stafford deftly handles the myth of “poison gas,” which Churchill is frequently said to have advocated against unruly Iraqis. Correctly he explains that “poison gas” was Churchill’s ill-advised description of tear gas. Even then, he notes, the RAF had to get Iraqi King Faisal’s approval to use it—which one would not expect was needed from a British puppet. Faisal had been made King by 90% of Iraq’s voters. He soon proved to be anything but a rubber stamp.

In thinly disguised disgust, Churchill even suggested offering Iraq and Palestine to the United States. It is hard to conceive of either being desired by an America lapsing back into isolation. The following year he would declare to Lloyd George: “We are paying eight millions a year for the privilege of living on an ungrateful volcano out of which we are in no circumstances to get anything worth having.” Does this sound familiar in 2020? Plus ça change, plus c’est la meme chose.

Professor Stafford depicts 1921 as a year of dogged achievement. Despite being widely distrusted for changing parties before the war, Churchill successfully navigated a whirlwind of geopolitical challenges. He did so while serving as a leading cabinet minister in the increasingly creaky Lloyd George coalition. The “Welsh Wizard,” Stafford notes, was a kind of “frenemy.” Together he and Churchill had championed the great Liberal reforms before the First World War. But Lloyd George was no rock of support. In the end, he found it easier to keep Churchill inside the cabinet than fulminating from the outside.

Churchill knew that, at any time, Lloyd George could be his political assassin. He was bitterly disappointed, for example, at being passed over for Chancellor of the Exchequer, his father’s old office. He would later become Chancellor, in 1924-29, after changing parties again and joining the Conservative Baldwin government.

Stafford believes history was Churchill’s “real religion,” citing his frequent claim that words were the only things that last forever. Thus he put great effort into his speeches and writings. By 1921, his speech technique was well crafted. He made careful choices of short, common words, adopting a speech rhythm resembling blank verse. He deployed sounds and images that enabled the audience to anticipate the conclusion. Often his final words fell amidst a clamor of assent. His striking metaphors and extravagant language raised emotions, taking listeners on a journey from dark into the light, from despair to hope.

While Churchill may be the most intensively studied historical figure, Stafford reveals many new or little-known  details. One was Churchill’s embarrassment when his cousin, Clare Sheridan, consorted with Soviet agents in London. She then traveled to Moscow where she sculpted Bolsheviks he hated, including Lenin and Trotsky. Still he forgave her. Another was Churchill’s action as Colonial Secretary to order the end of Mui-tsai, the selling of young girls into slavery in the British colony of Hong Kong.

Stafford’s description of this critical year is masterful. In 1921 the former “bold, bad man” of British national life rose above his reputation as a war-mongering opportunist. The picture is of a reflective and vulnerable man of character, strengthened by every reverse—a man of vision and, to a few observers, “a prime minister in the making.” Really good books about Churchill are scarce these days, and deserve full appreciation. This one belongs on any list of the top twenty specialized studies.