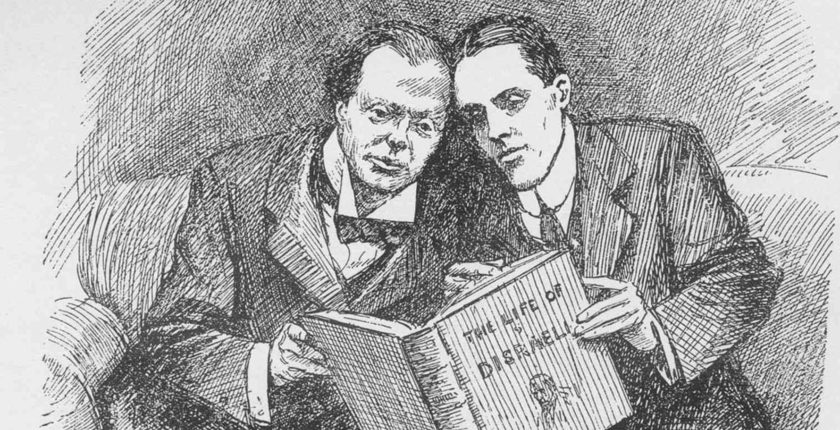 “He was a sincere patriot, a wise, grave, sober-minded statesman, a truly great jurist, a scholar of high attainments, and a gay, brilliant, loyal, lovable being….We met and talked on innumerable occasions; never did I separate from him without having learnt something, and enjoyed myself besides.” —WSC, 1937

The Other Club, the dining club established by Winston Churchill and F.E. Smith in 1911, had strict rules, including one against giving speeches. At the club’s dinner on October 30, 1930, however, the rule was suspended for Winston Churchill, who paid tribute to his friend, who had died a month earlier.

In brief and emotional remarks Churchill recalled Smith, who had been ennobled as the Earl of Birkenhead years before: “I do no  think anyone knew him better than I did, and he was, after all, my dearest friend.”

Unlike Churchill, who was the grandson of a duke, Frederick Edward Smith, born 1872, was the grandson of a miner. Always known by his initials “F.E.,” Smith was a glamorous figure at Oxford, first as a scholar at Wadham College and then as a Fellow of Merton College, before passing the finals for the Bar in 1899.

A brilliant success as a lawyer in Liverpool, he was soon earning £6000 a year and was elected to the House of Commons as a Conservative in 1906. His daring maiden speech, made from the opposition benches, was a triumph that carved his permanent reputation. In London, Smith achieved even greater success as a lawyer than he had in Liverpool, and he was soon earning huge fees for handling prominent cases.

A few months into the 1906 session, Smith and Churchill were introduced by a mutual friend as they stood at the bar of the House of Commons, awaiting an important division (vote). Although he had admired Lord Randolph Churchill, Smith was dubious about Lord Randolph’s son, who had deserted the Tories for the Liberals over the Free Trade issue in 1904. But once met, as Churchill later wrote, “our friendship was perfect.”

As Members of Parliament they were alike in many ways. Smith was one of the few contemporaries of Churchill who could match him in accomplishment and in his outsize, vivid personality. Both were about the same age, exceptional public speakers, dazzling conversationalists, intelligent and extremely ambitious. Both were dismissed as political adventurers and buccaneers by their foes. Tall and handsome, Smith was faster off-the-cuff than Churchill, with a “scathing wit” and arrogance that impressed friends but affronted others. He was also extravagant and self-indulgent in the expensive style of living that he maintained for himself.

Smith, Churchill said, “burned all his candles at both ends.” Physically strong and active most of his life, he played golf and tennis, rode horses, and was an impressive swimmer. Once during a trip to the Mediterranean with Churchill, he swam seven miles across the harbor at Syracuse. For his part, Churchill joined F.E. only for the first mile.

The two friends enjoyed each other’s company, regularly dining and talking together. They traveled together several times, with one of the earliest trips being in September 1907 when they spent a month on the continent, observing French army maneuvers in Champagne before traveling on to Italy. Later that year, Smith’s son was born and named Frederick Winston Furneaux, his second name in honor of Churchill, who became his godfather. Four years later at the birth of Churchill’s son, Smith provided the child’s second name* and was godfather at the baptism of Randolph Frederick Edward Churchill, held in the crypt of the House of Commons.

They served together as officers in the Oxfordshire Yeomanry where the annual week-long summer camp at Blenheim presented many opportunities for conversation, drinking and gambling at cards. The last two activities, which continued away from camp, concerned Clementine Churchill, who considered Smith an unpleasant “vulgarian” and a bad influence on Winston’s politics as well as his behavior.

Clementine knew that while Smith could quickly recoup his gambling losses by taking a rewarding legal brief, this avenue was not open to her husband. As John Colville wrote, she particularly “resented the late nights, the excessive consumption of brandy, the noise and rowdiness inseparable from the garrulous evenings in her own house.”

Smith supported Clementine in urging Churchill to give up flying lessons in 1913, and she called him a “faithful friend” during Winston’s nadir, after the Dardanelles crisis in the First World War. She always liked his wife Margaret, but she was never fully reconciled to him. In the 1920s she came additionally to dislike F.E.’s influence over her son Randolph, who idolized and emulated his godfather, with unfortunate results.

The Smith-Churchill friendship endured despite bitter party politics that characterized the years before the First World War, when acrimonious debates attended such issues as the Parliament Bill, Irish Home Rule, and David Lloyd George’s “People’s Budget.” Churchill, a fervent partisan and senior figure in the Liberal government, was a particular object of scorn and animosity for the Conservatives, and Smith was ruthless and effective at battering the government from the opposition benches.

In 1911, despite these political battles, Churchill and Smith established The Other Club, with limited membership equally divided among the parties. A monument to collegiality between Parliamentary antagonists, the organization’s most famous rule was: “Nothing in the rules or intercourse of the club shall interfere with the rancor or asperity of party politics.” It even provided for the “pairing” of opposing votes so that neither side was penalized when one of its dinners coincided with a vote in the House of Commons. Over a century later, The Other Club continues to meet.

Smith and Churchill were both prolific authors and, interestingly, wrote profiles of each other. In the Sunday Times in 1922, Smith wrote that Churchill had “never in all his life failed a friend.” In Great Contemporaries in 1937, Churchill wrote that Smith “had all the canine virtues in a remarkable degree—courage, fidelity, love of the chase….He was always great fun.”

Their fortunes jockeyed during World War I. Churchill began as first lord of the Admiralty, Smith only as a member of the opposition front bench. With the Dardanelles crisis of May 1915, Churchill was dismissed as first lord while Smith joined the new coalition government as solicitor-general. Six months later Smith became attorney-general, a cabinet post, while Churchill resigned from the cabinet and joined the army in Flanders.

Smith remained loyal. Although it probably damaged him somewhat politically, he spoke out in support of Churchill and was a key contact in London. Churchill’s political career rebounded under the premiership of David Lloyd George, who took power in December 1916 and eventually appointed Churchill Minister of Munitions.

The “khaki election,” a month after the 1918 Armistice, returned the Lloyd George coalition to office, and the prime minister offered Smith the appointment of Lord Chancellor, with a seat in the House of Lords. Accepting the offer would forever put the office of prime minister out of reach, and require Smith to forego the legal fees that supported his expensive living. After consulting with Churchill, Smith accepted the office, and was created F.E. Smith, Lord Birkenhead in February 1919.

Birkenhead aspired to be a great Lord Chancellor and, among other efforts, pursued reform of the divorce laws. He also joined Churchill, now his cabinet colleague, in negotiating 1922 the Irish Treaty. While Churchill spoke long and often at cabinet meetings, Birkenhead, befitting his position as Lord Chancellor, rarely intervened. But he became more self-indulgent and, despite periodic attempts at moderation, drank more heavily. His famous witty repartee became more caustic. On one unfortunate occasion, much to Clementine’s disgust, a drunken Smith gave a disastrous speech at Dundee in support of Churchill’s unsuccessful attempt to hold his seat in the 1922 general election.

Birkenhead and Churchill lost their cabinet offices with the collapse of the Lloyd George government in 1922, but returned together two years later in the Conservative government of Stanley Baldwin. Birkenhead became Secretary of State for India, while Churchill was appointed Chancellor of the Exchequer. In October 1928, Birkenhead left the government in a bid to earn money to support his family. Alas his health soon broke down, and he died at his London home on September 30, 1930, leaving his family with large debts.

Churchill was distraught on learning of Birkenhead’s death. He wept for his friend, repeatedly saying to Clementine, “I feel so lonely.” There was never any figure who replaced Birkenhead in Churchill’s life; no one was his equal, no one so close. After the Second World War, Churchill once wistfully remarked that along with his mother and father, his cousin Sunny Marlborough and Arthur Balfour, he wished that Birkenhead could have lived long enough to see what he had accomplished.

Featured Image: “Students on the Make:” Churchill and Smith read Monypenny’s The Life of Benjamin Disraeli. Smith: “Master of epigram—like me!” Churchill: “Wrote a novel in his youth—like me!” Together: “Travelled in the East—like us. How does it end?” (Leonard Raven-Hill in Punch, 2 November 1910.)

*Randolph Churchill’s third name, Edward, was for his other godfather, Sir Edward Grey.