Book of the Year: Paul Rafferty on Churchill’s “Paintatious” Riviera 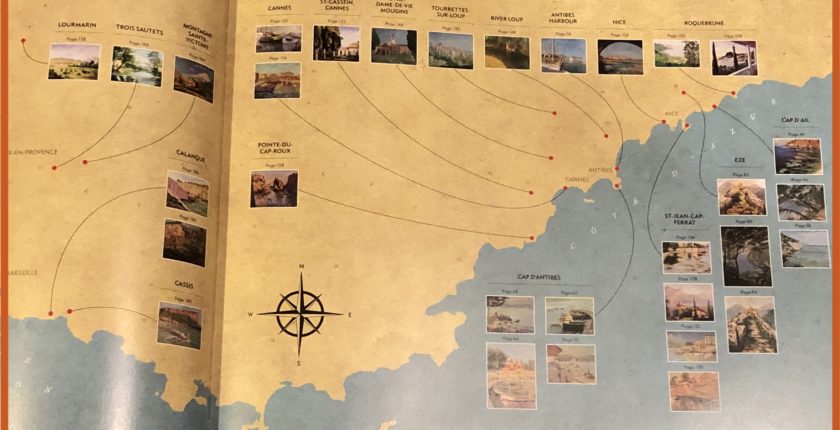 From the stylish map of venues that greets the reader, Paul Rafferty puts us at Churchill’s side through an elegant evocation of his favorite venues, then and now.

A work of art on Churchill’s art 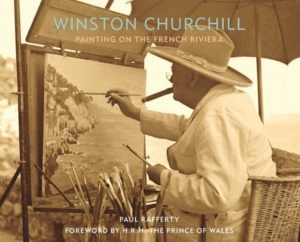 This beautiful book combines Churchill’s favorite paintings with fastidious research on where he created them. The horizontal format blends quality binding with brilliant color on thick, coated paper, and the price is a bargain. Although 2020 saw several commendable books on Churchill, this one is the most luxurious. Of course, Churchill’s fame does not rest on his paintings. But Paul Rafferty, himself an artist, brings them alive as adjuncts to WSC’s personality. (Full disclosure: this writer played a minor part in verifying quotations.)

The book’s forte is its “then and now” juxtaposition of Churchill’s art with photos of the precise venues. Again and again, the eye feasts on double-page spreads nearly two feet wide, showing a Churchill painting alongside the very spot today. Finding those spots often required exhaustive research and exploration.

Sometimes, Rafferty relied on photos Churchill had snapped to allow him to finish a portrait back at his studio. Familiarity with the area helped locate other spots. Occasionally a passerby would know where Sir Winston painted. But more often, it required Sherlockian sleuthing, sometimes resulting in bizarre adventures.

In search of the “Red Rocks”

Paul Rafferty carried 100 laminated cards of elusive paintings to help him “reacquire” Churchill’s targets. Among the elusive was “Red Rocks, L’Esterel.” There the whole coastline is red rocks! With two artist friends he drove along, vainly searching. Finally they stopped at one last lay-by. There they were!

Venturing down to see if access was possible, we came upon a nudist beach, much to our—and their—surprise…. We climbed over the cliff and down into the empty cove, with only piles of driftwood lying around. We began painting and after an hour or so I looked up to see a naked woman on top of the ridge we had just climbed over. She waved, probably wondering what we were doing: I waved back, certainly wondering what she was doing. I returned to my painting and suggested to the others, “You don’t see that, painting in Trafalgar Square.”

This was the only venue where Mr. Rafferty painted himself. Earlier he had might have been at these locations, but by chance not design. Discovering Churchill’s locations came later. “No paintings of mine appear in the book,” he says. “I began the project thinking this would be a good idea, only to realise, as did my London galleries, that it made no sense. The Red Rocks were an exception. I was with two artist friends, and when we discovered the location, it was natural that we set up and ‘have a go.’”

The depth of research is not confined to venues. Rafferty devotes pages to Riviera artist mentors, like Sir William Nicholson, John and Hazel Lavery and Alfred Munnings. Other pages illustrate his equipment, including his traveling easels, brushes, paintboxes and oils, even his Stetson hat.

Most of Churchill’s oil paints came from his “colourman” Willy Sax in Switzerland, whose role in the story is not missed. Having tried Sax’s oils, WSC quickly became devoted. Once Sax tempted him to try tempera instead of oils on a few works—surprising for this devoted oil painter. Churchill described tempera as “a most delightful medium, offering great possibilities both in roundwork and the finish of pictures.” But he soon returned to oils. In his famous essay, Painting as a Pastime, he compared oil painting to a military campaign:

You have a medium at your disposal which offers real power, if you only can find out how to use it…. You need not build downwards awkwardly from white paper to your darkest dark…. Strike where you please, beginning if you will with a moderate central arrangement of middle tones, and then hurling in the extremes when the psychological moment comes. Lastly, the pigment itself is such nice stuff to handle (if it does not retaliate).

In one of his letters to Sax he asks for “six tubes garance (Rose Madder), Rose Dorée or Pink Madder, two tubes Neutral Tint, four tubes Pale Violet Cobalt.” This reminds us of his dialogue with Field Marshal Alexander, painting together at Lake Como. “I always use just a touch of Rose Madder; do you use Rose Madder, Winston?” “But of course, Alex, I always use Rose Madder.”

Rafferty on the Churchill trail

The map above shows the amazing breadth of the Riviera places Churchill painted. Some are familiar: Three favorites were at Roquebrune-Cap-Martin: “La Pausa” (Emery and Wendy Reves) “Les Zoraïdes” (Daisy Fellowes) and “La Dragonnière” (Lord Rothermere). Then there were Lord Beaverbrook’s “La Capponcina” at Cap d’Ail, and Maxine Elliott’s Chȃteau de l’Horizon, in Golfe-Juan.

Rafferty also tracked the more obscure places, such as Consuelo Balsan’s villa near Eze, and Ralph Curtis’s “Villa Sylvia” at St.-Jean-Cap-Ferrat. Churchill painted churches and chapels, like St.-Paul-de-Vence, and loved water scenes. The River Loup in the Alps Maritimes whetted his passion for depicting water. Together with his easel, he wandered over Cannes, Nice, L’Esterel. He favored hotels at Cassis and Provence. He loved and painted certain preferred restaurants: Le Bonne Auberge at Antibes; La Voile d’Or at St.-Jean-Cap-Ferrat; and Restaurant Philip at Fontaine-de-Vaucluse in Provence. The latter’s proprietor, aged 92, still remembers him: a gourmet who would order from the menu. He particularly fancied the trout that abounded in the cold river—which again excited his artists’s eye.

Satiated with this vivid display of artistry and erudition, the reader is disappointed to get to the end. No worries. Just flip the book over and start again. There is so much detail, so many amazing comparisons of then and now, that it always seems fresh and new. Even trivia, such as Churchill’s motorcars (a sideline of this writer) gets some attention.

I’d never seen a photo of his 1956 Humber Hawk estate car, presented by his friend Lord Rootes. Churchill was rumored to have used it to haul his painting gear on the Riviera. Sure enough, Rafferty shows him seated in the Hawk, arriving at Villa La Pausa, no doubt driven by his faithful bodyguard Sergeant Murray.

And the work is not complete. In the back of the book Raffety offers a dozen Churchill paintings not yet pinpointed. They are “the elusive ones still to find.” Perhaps there will be a future addendum, with these paintings matched to vivid photographs of the venues today. It would be fun, even if only online, perhaps here. We’ll be hoping for it.