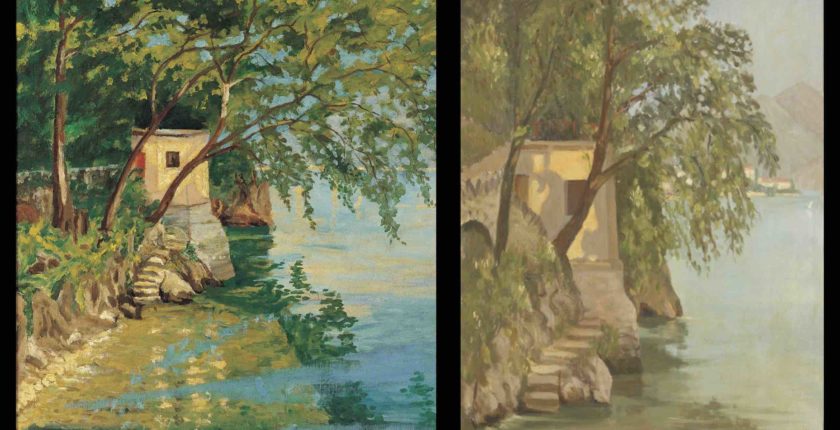 September 1945 brought a welcome respite for Winston Churchill. It was shortly after the general election, which he’d described as the longest week of his life. Field Marshal Alexander had requisitioned Villa La Rosa, on the shores of Lake Como in Italy. In September he invited Churchill to holiday there. Alexander, also an artist, stayed for two nights and they painted together. Side by side they depicted the Como lakeside, Churchill on the left, Alexander on the right.

At first glance, both works have distinct similarities beyond the subject. Both are representational works and both artists had similar tastes in art. Sarah Churchill, who was travelling with her father, wrote: “It is amazing how their styles are very similar and the painting conversation has been a delight.”

Alexander was an admirer and friend of the artist Edward Seago, as indeed was Field Marshal Auchinleck. Alexander personally enlisted Seago as an unofficial war artist on his Italian campaign, since the artist could not enlist because of a heart condition. Seago’s book, With the Allied Armies in Italy, reproduced his work during this campaign; Alexander wrote the foreword. Seago returned the compliment, writing the foreword to Alexander’s book The Paintings of Field Marshal Earl Alexander of Tunis. Clearly, Seago was a huge influence on Alexander’s style and taste.

Seago’s paintings were collected by the Royal Family, so much so that they became close friends. HRH The Duke of Edinburgh invited Seago to sail to the Antarctic on HMY Britannia in 1956, and they both painted on board.

Seago once commented that “if Churchill saw a red roof, he painted it red.” This could have been an observation on how Alexander saw Churchill’s “daubs.” Alexander himself wrote that Churchill “loved colours, and used far too many. That’s why his paintings are crude. He couldn’t resist using all the colours on his palette.” Alexander’s Como scene is subdued, restricted in both chroma and tone. His darkest dark is no darker than Churchill’s mid-tones. This gives Alexander’s work a warm, airy feeling, albeit far less bold. Sir Winston’s direct approach with brushwork and colour, without Alexander’s blending or softening of the edges, is more akin to Impressionism. Yet both works are rooted in that movement.

Composition is another stark comparison of the Como canvases. Churchill’s has more flowing rhythms and exaggerations. The trees overhang, almost kissing the water’s surface, extending far further over the lake and more fully covering his canvas. Alexander’s is more formal and traditional, making more of the distant buildings and mountains. The boathouse is similar in both the works, their palettes employing yellow ochre and a soft, mauve for the shadows made by trees. The stone steps are identical, save for the dark shadows in Churchill’s work.

Churchill revelled in painting water. He was forever fascinated by it, capturing the water’s myriad of colours, reflections and ripples. In this work, Churchill makes much of the cerulean and cobalt blue sky. This choice both breaks up the leaf canopy and makes for colourful reflections in the water. His observation with the overhanging trees and their reflection is given far more importance and commitment than Alexander, who chooses a more subtle, quiet statement. In Churchill’s water reflection, he paints the sunlit leaves and shaded canopy as a distinctive shape. The “V” reflecting the blue sky in the water also leads the eye, breaking up the monotony of the green.

From Lake Como on September 8th, Sarah Churchill wrote her mother, enchanted by the interplay between her father and his fellow artist. Their conversation, she said, was a delight:

Alex: “I always use just a touch of Rose Madder, do you use Rose Madder, Winston?” Winston: “But of course, I always use Rose Madder, what about Yellow Ochre?” Alex: “Yes, yes I’m very fond of Yellow Ochre, Yellow Ochre pale is very useful. I tell you what I really like, one shouldn’t use it but I always like a touch of pure black on the palette.” Winston: “Ah now there I disagree with you, no black—Neutral Tint perhaps, but never black. Do you know Neutral Tint? You don’t, my dear Alex you must try Neutral Tint, much better than black. I don’t like the sepulchral finality of black. I must say I like bright colours….” And so on and so on.

Last night I heard them wandering around the house theoretically touching up the positively frightful pictures there and Papa saying, “Now come here, Alex, come here, now really look at this, we really paint better than the bastard who painted this one….” It was of a stagnant murky pool and reflected some funereal shrubbery, two sombre fir trees blotted out much of the sky which looked reminiscent of a London fog, and yeering [sic] biliously between the trees was a pale and sickly sun.

After Alexander left Como, Churchill sat brooding over the offending painting. “We are all agreed, are we not, that this is the worst picture that has ever been painted? [That] it takes the palm for bad pictures?” Everyone nodded their assent. Sarah continued:

In a twinkling of an eye the picture was off the wall, was prised out of its frame and was being carried triumphantly up to the bathroom, which was being used as a studio, to be doctored…. I leapt upstairs where Father was squeezing great daubs of vivid colour…. suddenly beautiful flaming azaleas appeared on the dingy shrubbery, the dingy firs were given back the new green of their youth, the pallid sun instead of trying to break through the fog with fitful gleam sank in a splurge of glory, and the fog as if by magic disappeared, and the happiest of blue skies smiled down on the whole scene which had been caught by the hitherto stagnant, repellent pool, now a kaleidoscope of reflections.

It was breathtaking, it was enchanting, it was lovely. The whole thing accomplished and back in its frame and back on the wall inside half an hour. We sat and admired it for two hours, exhausted but satisfied by this act of “artistic rape” as my father called it…. We were all heart-broken when it was once more carried upstairs to have its face washed. It now hangs back on the wall, stagnant and gloomy as before.

Returning to the Lake Como paintings, there is one surprising omission in Churchill’s work. Ever willing to dash in the brightest of colours, he leaves out the bright red crisscrossed railing on the boathouse roof. This red is vibrating with its complementary colour of green in the trees and Alexander subtly puts it in. These are the choices the painters made at the time. As Sarah Churchill noted, they led to delightful conversations about art between them.

These two beautiful works were painted by men who had just led, fought and won a six-year World War. Now, far from the battlefield, a different—and for some unexpected—side of their natures bloomed, by the tranquil shores of a distant lake.

Paul Rafferty is a self-taught artist who has received support and encouragement from professional artists throughout his career. He primarily paints on location, in oil. Rafferty has been living in the South of France, California and London with his wife and three children. Since 2013 he has exhibited exclusively through. Portland Gallery, St James, London and Galerie Paul Rafferty, St-Paul-de-Vence, France.

Coming in October 2020, Sir Winston Churchill: Painting on the French Riviera is published by Unicorn Publishing Group and Churchill Heritage, with a foreword by The Prince of Wales. In 208 pages, Mr. Rafferty discovers the locations where Sir Winston painted on the French Riviera and Provence. The book features 300 images, many never seen before, and is essential reading for Churchillians everywhere, lovers of both his art and the charm of the South of France.

The book adds a new dimension to the several extant studies of Churchill’s paintings, revealing many previously unknown locations. From Menton to Cassis, from Aix to Avignon, Rafferty has tracked down over forty of Sir Winston’s en plein air scenes and settings. Other pages show Churchill’s painting materials, his mentors and friends in art, his techniques and his passions.

Paul Rafferty has been given access to some of the most exclusive, private villas on the Riviera, allowing him to photograph the actual views Churchill painted, and then to compare what Sir Winston saw to what we see now. Many views have changed little, while others have succumbed to the ravages of modern development. An exciting new discovery—a previously unattributed painting of St-Paul-de-Vence—can now be correctly assigned to the Churchill canon as a result of research at the Chartwell Studio Archive and on location in the South of France.