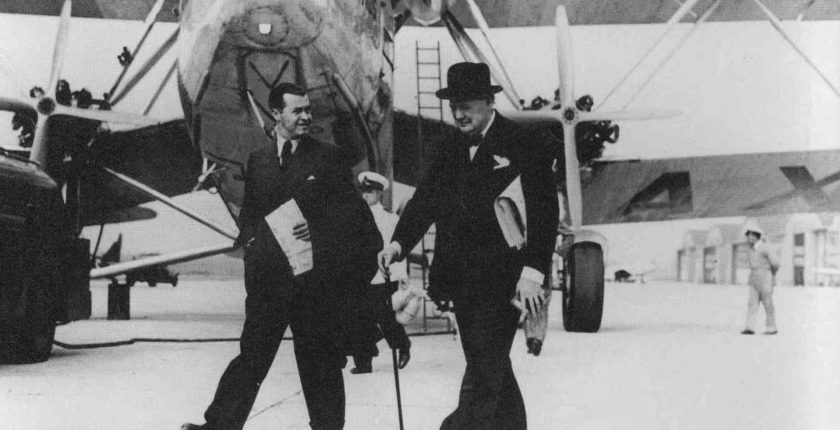 Given over 1000 books about Winston Churchill, we look back from time to time at classic older books still worthy of attention. Students and scholars would do well to read the “best of the old,” for their unique insights into Winston Churchill’s vision, humanity and statesmanship.

Emery Reves, from the ground up

Admirers of Sir Martin Gilbert were pleased and touched to see his chronicle appear, now over twenty years ago. But few expected it would amount to much more than a useful research tool. We were wrong, and quickly realized why Sir Martin and Wendy Reves were so keen to get it published. 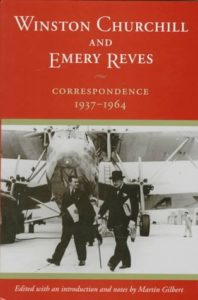 The Churchill-Reves Correspondence is marvelous reading for students of Churchill. It shows how an unknown Hungarian came to be the great man’s literary “diffuser.” (Reves himself eschewed the title of “agent.” He described himself as “Sales Department for the Production Chief.”)

Reves used Churchill’s screed like a palimpsest, spreading it to the far reaches of Europe, the Empire-Commonwealth and North America. Then, as Hitler’s influence spread, his outlets began to close: neutral countries dreaded the Führer’s wrath. Twice Reves escaped Nazi clutches. Operating from abroad, he earned Churchill millions for his war memoirs, his History of the English Speaking Peoples, and older titles as far back as Savrola. Later on, Emery and Wendy became Sir Winston’s hosts when kindly breezes brought him to the Riviera.

Reves started on a shoestring, selling Churchill’s 1930s articles (most of them readable today in Step by Step) around Europe. He charged as little as £1 to newspapers in poorer nations. By 1939 he’d built an impressive business, producing £50,000 a year in today’s money.

Churchill in those days was politically very incorrect. Reves got him on the front pages of thirty newspapers, 750 different outlets per year, with fifteen to twenty million readers in twenty-five languages. (I soon learned that Sapnis, the Latvian edition of Churchill’s short story The Dream, which I presented to Latvian President Guntis Ulmanis, was not the first Latvian translation. Reves was publishing Churchill articles in Latvian as early as 1937.)

Imre Révész (his father had adapted the surname from Rosenbaum) was born in Hungary in 1904, studied in Berlin and earned a degree in economics from Zurich University. In Berlin in the late Twenties he organized Cooperation Publishing, a unique organization. His goal was to publish works of European statesmen in other countries: Britons in Germany, Frenchmen in Italy, and so on.

Shunning Nazis, Fascists and Communists, Révész promoted writers who stood for liberty and freedom. After Hitler came to power, he was drummed out of Germany with only the clothes on his back. He moved to Paris, where he represented Britain’s leading statesmen: Churchill, Eden, Attlee and Herbert Samuel.

When France fell in 1940 Révész fled to London, losing his fortune but not his determination. Anglicizing his name to Reves, he soon set up shop in New York where Churchill and Eden helped him to emigrate. After the war, he was instrumental in placing Churchill’s writings to the widest possible audience.

A tenacious salesman and negotiator, Reves was gentle and generous toward the statesman he respected more than anyone. In the Thirties he waived commissions to place articles with foreign publishers Churchill had contacted earlier. He was never put off by the “gentlemen and players” relationship that marked their early encounters, when Churchill kept him at arm’s length. During the war, the PM refused to grant Reves favors, thinking it might set a bad precedent. He denied Reves’s offers to help distribute Britain’s message of defiance in neutral countries. Though he passed the proposals to Duff Cooper at the Propaganda Ministry, Churchill carefully noted that he was “not wedded” to them.

In their early letters WSC is always “Mr. Churchill” and the Hungarian “My dear Reves.” Sir Winston didn’t call him “Emery” until he began to holiday at Reves’s Villa La Pausa in 1956. Yet in a 1946 meeting, when Reves told him how his mother had been cruelly murdered by the Nazis, Churchill wept in bitter grief.

Their business relationship reflected the experience of many around Churchill. The boss expected his “familiars” to be on call constantly, whether convenient or not. They repaid him with devotion.

The most dramatic account in this book, in fact, starts with a perplexed Reves trying desperately to meet Churchill’s order; on one day’s notice, he dropped everything and sailed with Lord Camrose to America. The mission: to negotiate book and serial rights to Churchill’s memoirs, The Second World War.

Martin Gilbert’s connecting editorial contributions explain. Emery Reves is in Paris when the command arrives out of the blue. Sail with Camrose from Southampton at 1pm tomorrow on the Queen Elizabeth. Before you go, stop at Chartwell for a briefing. Now, please!

Fog surrounds Le Bourget airport—no commercial flights. “Can’t you get a private plane?” Churchill says impatiently. Reves finds a rickety two-seater. He sits in dread for twenty minutes, until the pilot is denied take-off “because my motor gives off sparks.” Tenaciously, he gets to Croydon the next morning, too late to stop at Chartwell. Churchill sends a car that speeds him to Southampton. He thinks he’ll miss the ship! But he has gained a vital hour because Britain has just set its clocks back. The old Churchill luck.

Reves is the last passenger on the sold-out Queen’s maiden voyage. Churchill has procured his cabin by importuning Cunard’s chairman. Reves looks up Lord Camrose—who has no idea why Emery is there! Reves cables Churchill to please explain. Churchill replies: “I am sure you will do an excellent job, but you must be very confidential and you must realize that you do not actually represent me.” Such confusion would flummox lesser men. But by the end of the voyage, Emery has made friends with Lord Camrose, and they divide the workload.

They decide that Camrose will deal with newspapers, Reves (“unofficially”) with magazines. Reves helps steer negotiations away from the bad deals and toward the best. The best is Henry Luce of Life, whom Camrose doesn’t wish to see. Luce, he sniffs, “hasn’t replied to my letter.”

Learning that Luce is in New York, Emery rings his friend, the redoubtable Claire Boothe, Luce’s wife. “Harry” is in bed, exhausted after a two-night flight from China. Reves tells her his mission is urgent. He  rushes to a cab, presents himself at the Waldorf Towers and asks Claire: “Please wake Harry.”

Sleepy and angry, Luce appears in his dressing gown: “You are the fifth or sixth or seventh agent who comes to me saying he represents Churchill,” he grumbled. “Now who is his representative?”

“All I can tell you,” Reves says, “is that in forty-eight hours [the war memoirs serialization] will be decided. You can talk to me today or tomorrow, but after tomorrow you won’t get it.”

Luce gets it. Reves sends Camrose, to sign the deal as “official” representative. Camrose reports: “They made a very good offer….$1,400,000 for the American serial and book rights….”

Reves replies, “Lord Camrose—No! The  American serial rights—yes—but not the book rights! You must stop it.” Reves has friends at Houghton Mifflin—and they are good for a quarter million for the book rights in addition to Luce’s $1.4 million for serialization.

Neither Camrose nor Reves charge Churchill for their services. “He did it to get the British [serial] rights for the Daily Telegraph,” Emery says. “I did it to get the foreign rights for me. But we both acted on principle.” Reves prospered on the usufruct he had earned. But he might have done it for nothing for his hero, the Chief of Production.

We can learn much from this book, guided by the perceptive and sensitive Martin Gilbert, who always provides just the right supporting commentary. Example: Sarah Churchill’s note when her father is beset by critics of his memoirs. These are words every writer should heed: “Darling Papa…Don’t listen to too many critics—Each critic criticises from a personal angle. The work is yours—from deep within you—and its success depends on it flowing from you in an uninterrupted stream.”

From Emery Reves himself, after the unexpected end of his brief intimacy with Churchill, comes another piece of wisdom for anyone who, lied about, is tempted to deal in lies:

During my long life I developed the capacity to end a big cry in laughter and today I can only smile at the past two years. How childish and unnecessary all those intrigues were, how easy it would have been to maintain our beautiful relationship and to add to it anything that might have attracted you…. Should we not be able to defeat the intrigues that so unnecessarily separated us, then I am anxious to preserve the memories of our association during the years 1955-58. After all, what does one keep in life as time passes? A certain number of memories…. I do not know what memories you have of those years, but mine are unforgettable.

It is a tribute to this book, and those who saw it into print, that a memory of two unforgettable spirits is so eloquently presented.

Richard M. Langworth CBE is Senior Fellow for the Hillsdale College Churchill Project and author or editor of ten books on Winston Churchill. In the interest of full disclosure, he played a minor role in implementing the publication of this book, for which he received overly generous thanks in Martin Gilbert’s acknowledgements.