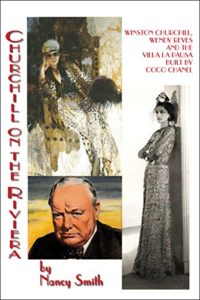 “Winston Churchill found life on the French Riviera so appealing that he availed himself of the invitations of several owners of villas which dotted the coastline,” Nancy Smith reminds us (3). Lovell and Smith each concentrate on one of Churchill’s favorite and magnificent residences, where he repeatedly stayed. Lovell writes of Château de l’Horizon in Vallauris, built by the American actress Maxine Elliott (1868-1940). Elliott is herself a central character in Mary Lovell’s The Riviera Set, along with hostess Daisy Fellowes, (1890-1962) and guest Doris, Viscountess Castlerosse.

Nancy Smith considers Villa La Pausa, built in 1929-1930 at Roquebrune by the Duke of Westminster. “The wealthiest man in London” (4), the Duke built it for his mistress, Coco Chanel. Nicknamed “Bendor” for the gold band on his coat of arms, he was also a close friend of Churchill’s. From 1953, La Pausa belonged to Emery Reves, Churchill’s literary agent. Reves lived there with “his stunning blonde Texas mistress” Wendy Russell (166), later his wife. Wendy survived him by twenty-six years, and retained La Pausa until her death in 2007.

Smith misleads us in stating that as a result of “the stormy bust-up between Coco and Westminster” at an unspecified date in the winter of 1929-1930, “Churchill was no longer invited to La Pausa” (33). But Churchill never actually stayed there in the early 1930s. He came once, Smith herself writes, to take a look while the villa was being built (27).

Smith also errs in saying Churchill “moved on and by 1934″ to Château de l’Horizon. Churchill first stayed in Maxine Elliott’s château in August 1933. His last visit was in January 1939 (Lovell, 99, 188). Elliott died in Cannes in March 1940, following a stroke a few months before. After the war, Churchill never returned to the villa, which now belongs to the Saudi Royal Family.

In between, he became a regular visitor, but most of the times without Clementine. His wife was ill at ease among the unmarried, adulterous (or “LGBT,” as one then did not say) couples who graced Maxine’s dinner parties. Lovell explains: “Clementine did not wish to be associated with this raffish crowd, even though a number of them were kinsmen or close friends who were personae gratae at Chartwell. Her fastidiousness made her disapprove of the way Maxine and her guests sat around and gossiped about their peers (122).” 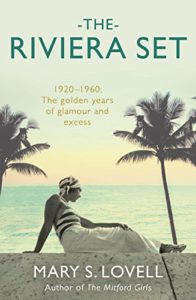 Winston loved the Riviera. He took no notice of its description as “a sunny place for shady people” (227). One such shady person was no doubt Doris Castlerosse. Lovell devotes several pages to the rumor that this celebrated society beauty assaulted Churchill in his bed in August 1935. The story goes that the sexagenerian yielded to her charms and congratulated her on her exceptional prowess in bed (142).

If Lovell really had evidence to substantiate such hearsay, it would have been a “scoop,” since Churchill’s marital fidelity is solidly established. The author confesses that one can only rely on very flimsy clues and precarious conjecture. In other words there is nothing to the story. But the effort was not wasted, since Lovell really puts paid to all these old myths which find their way onto the Internet.

The Churchill presence at the Château de l’Horizon was indirectly prolonged after the war by his former daughter-in-law. Pamela Churchill, née Digby, lived there in 1947-48 with her new lover, Aly Khan. The Aga’s fabulously rich son bought the villa in 1947. When he left her to marry Rita Hayworth in 1948, Pamela found solace with another member of the “Riviera Set,” Giovanni Agnelli, heir to the Fiat automobile fortune.

From 1948, Churchill stayed increasingly at La Capponcina, his old friend Max Beaverbrook’s villa at Cap-d’Ail. Then in 1956, he found the ideal place at La Pausa with Emery and Wendy Reves. Much has been written on Churchill’s so-called “love” for Wendy. It led to more gossip and Clementine put a stop to his visits. Smith mentions both bona fide testimonies and malevolent insinuations which have fueled gossip over the years.

Her most fascinating piece of evidence has to be a remarkable article of reminiscences written by Wendy Reves herself on 20 March 1989 and published in the Dallas-Fort Worth High Society newspaper (reprinted in Smith’s book as Chapter 11, “Memories of Winston Churchill”). The book is worth acquiring if only for this little gem alone. She candidly faces the usual prurient accusations: “I never said ‘no’ to him, and by golly I made him happy. Now when they quoted me in the London newspapers, they inferred it sounded like sex, but that wasn’t it (170).”

It is not too much to say that, short though it is, this insightful chapter by Wendy Reves ranks with the recollections of Montague Brown or Colville on the aging Churchill, his habits, tastes, wishes and mental framework—his personality in the last decade of his life.

End of the Affair

The sad story of Churchill’s estrangement from the Reveses is attributed to scheming by Aristotle Onassis, who later began hosting Churchill on his yacht Christina. The Greek tycoon was thought by Wendy to have vindictively refused to invite the Reveses to join Churchill, which seems odd since Onassis was introduced to WSC by them. Wendy also alluded to Clementine’s part in developments: “It was a big fallacy…this big great love that they had. They pretended and they played the game, but it was not so” (211). That is certainly wide of the mark, given testimony to the opposite by numerous people around the Churchills.

The final chapters of the book dwell on Wendy’s life after Emery’s death in 1981 and how she indefatigably tried to keep the memory of Churchill—and Churchill at La Pausa—alive in the United States, with her donations to the Dallas Museum of Art, and other U.S. and French institutions. (Smith misspells French President René Coty as “Cody,” though he had no relation to Buffalo Bill….) One cannot see such color photographs of rooms at La Pausa elsewhere.

Taken together, I recommend these two attractive books as significant contributions to our knowledge of Churchill’s entourage and favourite haunts on the Côte d’Azur from the early 1930s almost until his death.