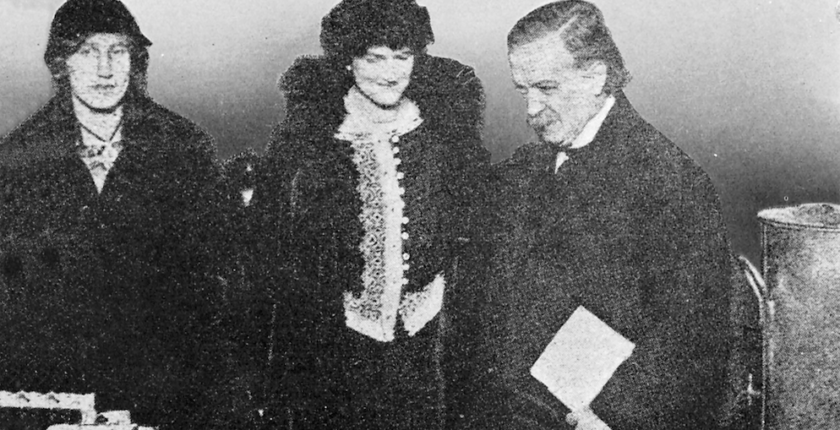 Winston Churchill first met Violet Asquith in the early summer of 1906 at a dinner party. She was 19, he 32. A close friendship developed, lasting throughout their lives. Apart from his wife Clementine, Violet Asquith, later Lady Violet Bonham Carter, was one of Churchill’s closest women friends.

At the time of their meeting, the Liberal Party had been swept into power by a vast majority. Sir Henry Campbell-Bannerman was prime minister and Violet’s father H.H. Asquith was chancellor of the Exchequer. Winston Churchill held his first office in their government as Under-Secretary of State for the Colonies (December 1905-April 1908).

Nineteen-year-old Violet was fully aware of Churchill’s vivid exploits in South Africa, his fame and emerging career. “I found myself sitting next to this young man who seemed to me quite different from any other young man I had ever met,”1 she recalled. He spoke to her “on the shortness of human life and the immensity of possible human accomplishment.”2 Violet admired his drive, his masterful use of language.

On 5 April 1908, Campbell-Bannerman resigned for health reasons and was replaced by Asquith. Violet urged her father to promote Churchill to the Cabinet. Asquith, who did not need to be persuaded, appointed Churchill President of the Board of Trade. With Downing Street and the Board of Trade in close proximity, Churchill and Violet met often. A special bond formed. After meeting with her father, she recalled, he would “talk to me in my little sitting room in the garden on the way out.”3

Violet adored the young parliamentarian. She was apparently unaware, however, that Winston was courting Clementine Hozier. On 11 August 1908, Winston proposed to Clementine and was accepted. From this several myths have grown.

The Prime Minister and his family were staying that summer at New Slains Castle, Cruden Bay, Aberdeenshire. On 24 August—some say with Clementine’s disapproval—Winston visited the Asquiths in Scotland, delivering the news personally. The Churchills married on 12 September, and Violet did not attend the wedding.

A week later, Violet left on a walk, taking a book and roaming the cliffs where she and Churchill had previously rock-climbed. Her parents, hosting a dinner, were unaware of her absence. When darkness fell, no one could find her. Guests, servants and locals searched the slopes and ledges. The Prime Minister was desperate. Local headlines blared: MISS ASQUITH’S PERIL…PREMIER’S DAUGHTER MISSING…HOUSE PARTY’S THRILLING  SEARCH.4 Violet was located unharmed. She later claimed that she had slipped, landed on a ledge and hit her head. She was found lying on grass near the coastal path, not on a ledge, but of course she might have moved.5

In 2013, the writer Michael Shelden produced a stir, stating that Violet had attempted suicide in despair over Winston’s engagement. Shelden’s evidence was Churchill’s remark to his friend Lord Rosebery: “I behaved badly to Violet, because I was practically engaged to her.”6 Another story was that Violet was so unhappy about Winston’s marriage that she staged her disappearance for attention. The lack of corroboration suggests both stories are fiction. (See Addendum.)

After his marriage, Churchill and Violet mingled at social functions, such as on 10 June 1911. Lloyd’s Weekly Newsletter reported a Blenheim Palace ball for the recently-deposed King Manuel II of Portugal. In dress uniform, Lloyd’s reported, the 9th Duke of Marlborough received his 600 guests: “Besides King Manuel there were present Miss Violet Asquith; Mr. Winston Churchill; Sir Joseph Ward, Premier of New Zealand; Lady Ward and Miss Ward; the Duke and Duchess of Wellington and [former Portuguese Ambassador] Marquis de Soveral.”7

I don’t want tea—I don’t want anything—anything in the world. Your father has just offered me the Admiralty.… Look at the people I have had to deal with so far [as Home Secretary]—judges and convicts! This is a big thing—the biggest thing that has ever come my way—the chance I should have chosen before all others. I shall pour into it everything I’ve got.8 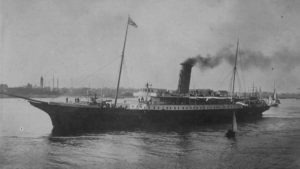 The Asquiths had earlier criticized Clementine privately, but any animosity seemed to vanish after Asquith appointed Churchill to the Admiralty. Moving from Eccleston Square to Admiralty House in April 1913, Clementine wrote her husband: “The Prime & Violet picked me up…. [Moving to the Admiralty is] much of an event in a ‘Kat’s’ life.”9 Anticipating a voyage on the Admiralty yacht Enchantress in 1913, Clementine wrote: “Violet is coming, a delighted telegram came from her yesterday.”10 Asquith’s wife Margot also joined the party. They cruised the Mediterranean and Adriatic, visiting Lord Fisher at Naples and Lord Kitchener at Malta.

On 23 April 1915, Rupert Brooke, the poet known for The Soldier and other sonnets of the First World War, died in France aged 27. On 26 April, Churchill wrote a memorable obituary in The Times: “The voice has been swiftly stilled. Only the echoes and the memory remain; but they will linger.” Much moved, Violet wrote:

Dearest Winston, I must write one word to tell you how beautiful I thought your tribute to our beloved Rupert in today’s Times. All those who loved him must be grateful to you for it. I feel heart broken. He was the most radiantly perfect human being I have ever known—so flawless that one sometimes wondered whether he quite belonged to this ragged scheme of things-whether he hadn’t strayed out of some faery land. He had so much left to give the world…. Goodbye dear Winston—bless you. Yrs ever, Violet.11

Violet must also have found Maurice Bonham Carter at least close to radiantly perfect. Their engagement was announced in July that year.12 They were wed on Churchill’s birthday, 30 November. Winston was in training with the Grenadier Guards in France, but Clementine attended, and their son Randolph was a page.13

The events that sent Churchill to the trenches were the Gallipoli debacle and his departure from the Admiralty in May 1915. Frustrated and powerless, he resigned from the Asquith cabinet in November. This marked the end of cordial relations with Asquith, but not with his daughter. After he had returned from the front in 1916, Violet visited him in Kent, where he was painting. Amid the distant thunder of cannon in France, Churchill laid down his brush and spoke with bitterness. How unfair the attacks were on him over Gallipoli; how much he hoped for vindication through a public inquiry. It was the government’s duty to lay the facts before Parliament. Why should he be excluded from the world struggle, when everyone knew he could play an essential role? They didn’t want to listen, he told her. They only wanted to keep him out.14

9 “Kat” was Winston’s nickname for Clementine. CSC to WSC, 6 April 1913, in Mary Soames, Speaking for Themselves: The Personal Letters of Winston and Clementine Churchill. (New York: Doubleday, 1997), 73.

Evidence of Violet’s attempted suicide, Mr. Shelden claimed, is “buried in the Asquith family papers.” It did not appear in his book. Nor have we found in Clementine Churchill’s letters anything to suggest she was “furious” over Winston’s visit to the Asquiths in August. This is not to say it doesn’t exist.

It is true that Violet was Churchill’s lifelong admirer. Early on, she was less than close with Clementine, who developed an extreme dislike for her father after WSC was cashiered from the Admiralty in 1915. But we have no documentary evidence of Churchill being drawn to Violet, such as his loving letters to his early flames, Pamela Plowden or Ethel Barrymore. It was more of a hero-acolyte relationship.

Shelden wrote that Violet, distraught over Churchill’s marriage, “refused” to attend. The historian Paul Addison offered a different explanation, based on Violet’s letters: “Her father’s demand that she not appear publicly with Churchill stemmed from his dissatisfaction with WSC’s unauthorized interventions into foreign policy. In alliance with Lloyd George, Churchill was then vigorously opposing increases in the naval estimates.”

This would seem more plausible than personal pique. Dr. Addison concluded: “Churchill would not have wanted to tie his fortunes by marriage to those of Asquith or any other politician. Were they ever romantically linked, except perhaps in her imagination? We need better evidence than we have read thus far.”