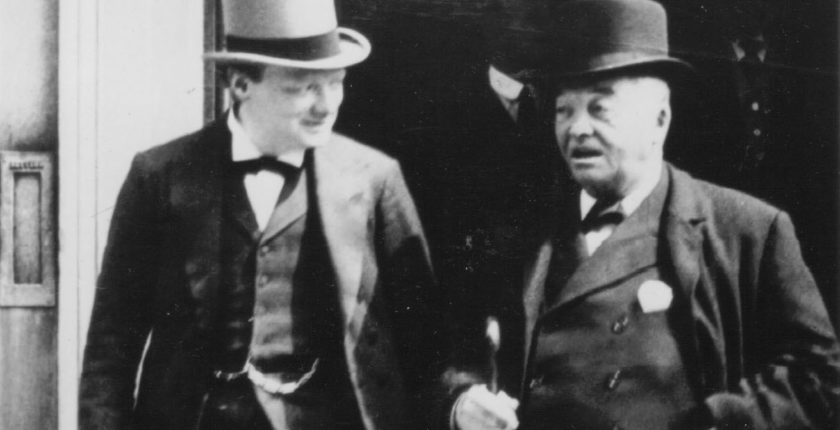 Churchill and Fisher leaving a meeting of the Committee of Imperial Defence, London, 1912. (Wikimedia)

This series chronicles one of Churchill’s most baffling political adventures. Still a Member of Parliament, he began 1916 as a serving officer on the Western Front. He was however anxious to return to London and Parliament. He wished this for two reasons: to clear his name, damaged during the Dardanelles adventure and the ill-fated Gallipoli campaign; and to exert a role directing the raging world war.

British, Imperial and French land forces withdrew from Gallipoli in December 1915 and January 1916. Excluded from the reorganized War Cabinet in November 1915, a hapless but defiant Churchill spoke in Parliament, then left to join his regiment. He served with every success, but ached for the “battlefield” of Westminster. There, he felt sure, he could help save Britain and the Admiralty from shaky leadership.

The name of Admiral of the Fleet Lord Fisher, commonly known as “Jacky,” was on the lips of everyone who cared about the Royal Navy. Fisher’s resignation in May 1915, at a critical stage of the Dardanelles campaign, had led to Churchill’s removal as First Lord of the Admiralty. That post constituted the political head of naval administration, with a prominent position in Cabinet. It offered unbounded influence in all aspects of war direction. Fisher had been at that time First Sea Lord, the senior naval officer.

Churchill brought the famous Admiral out of retirement in October 1914 to put zeal and drive into naval affairs. Fisher arrived at a time of misadventure. In the Pacific the Royal Navy had suffered defeat at Battle of Coronel, though this was later avenged at the Falkland Islands. Three light cruisers and other vessels were sunk in the North Sea. In the Mediterranean, despite a British chase, the German warships Goeben and Breslau escaped to Constantinople.

After Fisher resigned, Churchill could not remain First Lord of the Admiralty. Truth to tell, he had too many political enemies. Prime Minister H.H. Asquith made him Chancellor of the Duchy of Lancaster, a post with little power and no influence on the war effort. For months the ghosts of Churchill and Fisher hovered over the Admiralty and haunted the navy. They were men of immense drive and administrative skill. They were prescient (unusual in their time) and could envision the future. Simultaneously, the Admiralty lost Churchill’s power and vision, and Fisher’s drive as a constructor of ships. Their plans for a Baltic operation against the German High Seas Fleet had come to nothing.

While the two titans pursued new concerns and obligations, they retained a sharp watch on the British Grand Fleet. Neither could be muzzled. Neither could be discounted. They worked in strange harness. From individual vantage points they watched with sadness, even horror, as the instrument of British sea power rusted at its moorings in Scapa Flow. Given the superiority of the Royal Navy, Churchill and Fisher saw this somnolence as a wasteful tragedy.

At the Admiralty, months of lassitude and inaction passed with little advantage to British fortunes.  The Western Front was static, locked in human carnage. At Scapa Flow the Commander-in-Chief, Admiral Sir John Jellicoe, worried incessantly about the insufficiency of cruisers, destroyers and minesweepers. In addition to health problems and mental anxieties, he resembled Nelson in an earlier age. He never had enough frigates, his sources of information and first line of defense—what Americans would call picket ships. But he did not know how, in Nelson’s famous words, to “Engage the Enemy more closely.” Some adjustments were made in the deployment of surface units, which partially helped. But in the yards, construction was slow and ships in commission were never enough. In particular, Jellicoe complained about delays in finishing the facilities at the new base at Rosyth, near Edinburgh.

Such complaints fed Fisher’s outrage over Admiralty affairs. It also gave him the ammunition, especially with respect to ship construction. That led to his appearance before the War Cabinet in March. Jellicoe urged Fisher to remain out of office. If Fisher were drawn in, he warned, he would by definition share the responsibility. Fisher would not have minded. He may have seemed an unlikely admiral, but since the age of Nelson he was the most powerful and capable. Like Churchill he was itching for action. Men such as “Winston and Jacky” did not shy from challenges. They were prepared to risk exposure to misfortune.

A plan of campaign

The relationship of Churchill and Fisher began in 1908, but blossomed in 1911 when Churchill went to the Admiralty. Fisher was one of his closest naval confidants. They kept up an association to the eve of Fisher’s death in 1920. But the oddest event in their long association came after Churchill’s return on leave from the Western Front, in early March 1916.

On his arrival in London, Churchill learned that the naval estimates (budget) would be debated in the House of Commons. Here was a rich opportunity to defend his reputation and to demonstrate what he regarded as his superior grasp of naval policy. This last would necessarily involve criticizing his successor at the Admiralty, Arthur Balfour.

Churchill had little political capital, but he gathered his few allies to ponder the best way to attack the government. Key newspapermen—C.P. Scott of the Manchester Guardian and J.L. Garvin of the Observer—wanted him back in London. His friends F.E. Smith (later Lord Birkenhead) and Sir Francis Hopwood (then Civil Lord at the Admiralty) met or dined with him on 3 March.

Churchill worked diligently on his speech. The draft made no mention of Fisher. After a meeting with Hopwood, referring to the Dardanelles, Churchill suddenly said “he would teach that d—d old oriental scoundrel Fisher what it meant to quarrel with him.” At this particular juncture, we might ask: Did Churchill really intend to be vindictive and embarrass Fisher? The stage was set for theatrical events, punctuated with comic overtones—and an even more curious turnaround.

Scott’s role behind the scenes commands particular note, because he had been in close touch with Jacky Fisher since 29 February. Likewise the 13th Duchess of Hamilton, who had befriended Fisher after his exit from the Admiralty. Scott wrote in his diary: “Saw a great deal of Lord Fisher almost always at the Duchess of Hamilton’s flat in Cleveland Row where she took part in the conversations—a capable and beautiful woman entirely devoted to his interests. He lives in an atmosphere of intrigue in which he does not appear to play a very skilful part.” At their meetings, Scott encouraged a reconciliation with Churchill. Fisher agreed. He had entirely reversed his attitude of 1915. Now he spoke of Churchill as a future prime minister.

One disadvantage to Churchill, if he left the army to return to the Commons, was the loss of his army salary. Members of Parliament were paid but little. He had no money, said Scott, and had to borrow to provide for his family. Clementine wanted him to remain in the Army; the promise of a battalion had been made. Churchill wavered, but could not resist the political challenge, the risks of which he was well aware.

Some of Churchill’s political friends were also friends of Fisher; many wished to bring him back to the Admiralty. On 4 March, Churchill invited Fisher to lunch. His wife had never liked the old admiral. F.E. Smith, who was present, recalled that Clementine told Fisher point blank: “Keep your hands off my husband. You have all but ruined him once. Leave him alone.”

Despite Clementine’s dislike, Fisher was invited to Churchill’s house the following evening. Churchill read his speech to Fisher and said he would end with an appeal for the return of Fisher to the Admiralty. Fisher gleefully wrote Churchill early the next morning, full of his old fire: “I am going to be the humble instrument! … We can do it! Come on!”

That same day Prime Minister Asquith got wind of Churchill’s intention to speak on the 7th. Although his actions often belied it, Asquith claimed to have Churchill’s interests at heart. Now he was concerned that Churchill might damage himself politically. That evening the Asquiths dined with the Churchills. Asquith’s daughter Violet later wrote: “My father … feared that [Churchill] was going to make a most unwise speech [and] had done his best to dissuade him from it, but evidently felt that he had failed.”

Asquith’s wife Margot, who had been sitting next to Churchill, told him how sorry she was to hear that he intended to speak on the navy. After all, he had made a good exit from the Admiralty and, risking his life, had taken his place in the fighting line. “Don’t go and spoil it,” she warned. Churchill, she said, seemed to be dreaming of an Opposition that he would lead.

Churchill would not take the Asquiths’ advice. He did not want to lose an opportunity duly offered.