The Churchill Project - Hillsdale College > Articles > Q & A > Churchill and America > Did Churchill Ever Make Public Criticism of Americans or America?

Did Churchill Ever Make Public Criticism of Americans or America? 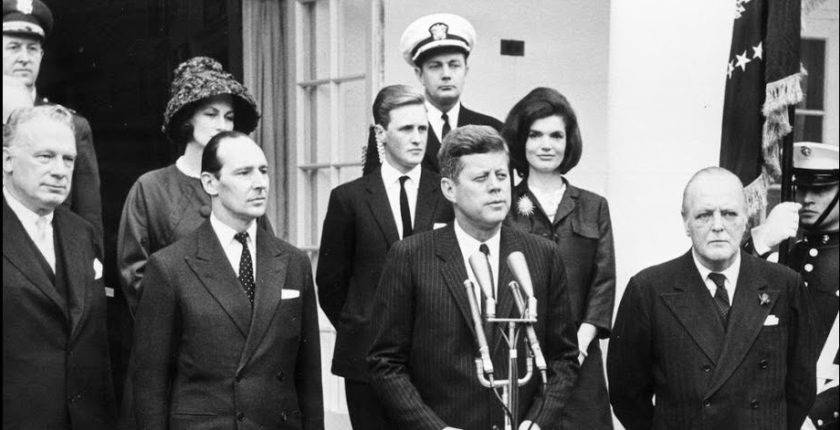 “In proclaiming him an honorary citizen, I only propose a formal recognition of the place he has long since won in the history of freedom and in the affections of my—and now his—fellow countrymen….By adding his name to our rolls, we mean to honor him—but his acceptance honors us far more.” — President Kennedy, Washington, 9 April 1963. L-R: Acting Secretary of State George Ball, Lady and Ambassador Sir David Ormsby Gore, Winston Churchill (grandson), naval aide Tazewell Shepard, John Kennedy, Jacqueline Kennedy, Randolph Churchill.

“It is not open to the cool bystander…to set himself up as an impartial judge of events which never would have occurred had he outstretched a helping hand in time.” —Churchill, The World Crisis, vol. IV, The Aftermath, 1929.

Q: I know Churchill had serious criticisms of American policies and presidents, such as war debt repayment demands in the 1920s, isolation in the 1930s, war strategy in the 1940s, and a summit with the Russians in the 1950s. But did he ever utter these criticisms in public? —R.F., New York

A: Call it prescience or good planning, but it is amazing how little criticism Churchill voiced toward America or Americans in public. The most serious exclamation I could come up with in my quotations volume Churchill by Himself was at a Quebec press conference in 1944: “Toilet paper too thin, newspapers too fat.”1

Frustrated over war strategy differences shortly after Pearl Harbor, he waxed philosophic: “In working with allies, it sometimes happens that they develop opinions of their own.” Yet even this “outburst,” on 27 January 1942, was delivered in a secret session of the House of Commons.2 In published books and articles he was more direct, but even there his criticism was tempered.

From the age of 25 Churchill believed in a “fraternal relationship” as he called it, between Britons and Americans. He was steeped in U.S. history, politics and literature. He was a keen student of the American Civil War, whose brother-against-brother hubris appealed to his romantic nature and photographic memory. President Roosevelt learned this passing through Frederick, Maryland in May 1943. Spontaneously, Churchill recited without pause Whittier’s moving (though somewhat inaccurate) poem, “Barbara Frietchie.”

Churchill’s love affair with what he routinely referred to as “The Great Republic” began with his first visit to the United States in 1895. There he was welcomed by his mother’s friend Bourke Cockran. At forty-one, Cockran was a Democrat Member of Congress and a maverick politician like Churchill himself soon would become. Later, during visits to America between the world wars, Churchill became impressed with the vastness, energy and potential of his “mother’s land.” He wrote witty articles on his travels, with titles like “Land of Corn and Lobsters.” He concluded that the country’s potential was unmatched in the world.

Temperamentally and philosophically, Churchill was more at home with the Democrats of his time than the Republicans. Still, his criticisms were muted and private. Though he had many differences with Democrat Woodrow Wilson, he was more disappointed in Wilson’s Republican-led Congress, which had denied Wilson’s bid to bring the United States into the League of Nations. To find a Republican presidential candidate Churchill preferred, we must go back to Theodore Roosevelt, in 1908, since “TR” ran as an independent in 1912. Churchill considered Harding a foolish isolationist, Coolidge short-sighted, Hoover ineffectual. Again, though, his criticism was never public. As World War II loomed, Churchill found a natural ally in Franklin Roosevelt, though he had offered faint criticism of the New Deal in a prewar essay.3

Churchill quite liked Roosevelt’s Democrat successor, Harry Truman, and quietly supported Democrat Adlai Stevenson in 1952 and 1956. WSC had worked ceaselessly for an Anglo-American rapprochement with the Soviets after the war. But he was frustrated by Eisenhower, who compared post-Stalinist Russia to a woman of the streets. She might have a new dress, the President said, but “there was the same whore underneath it.”4 Out of office when the Suez Crisis threatened to wreck the “special relationship” in 1956, Churchill wrote sadly to Eisenhower: “I do believe, with unfaltering conviction, that the theme of the Anglo-American alliance is more important today than at any time since the war.”5

Though he had quietly despised Joseph Kennedy, America’s defeatist Ambassador to Britain in the early part of World War II, Churchill admired the younger Kennedys. These included Kathleen, who died in a plane crash in 1948, and Jack, who as president proclaimed Sir Winston an honorary American citizen in 1963.

Churchill was not an uncritical lover. Though he carefully avoided public criticism, he had harsh words in private for certain American institutions. Frequently though privately, during World War II, he railed against American military decisions. For him, Britain’s unwritten constitution symbolized the British tendency to see things in shades of grey. The Americans, he complained, always viewed things in black and white.

But he never lost faith in America’s destiny or capacity for good. His greatest disappointment in old age, one of his closest colleagues agreed, was that the “special relationship” never really blossomed as he had wished.6 In recent times he would be cheered by recent Anglo-American collaborations over the Falklands, Afghan and Iraq wars. The late Caspar Weinberger, President Reagan’s Secretary of Defense, told me that one reason he prevailed in Reagan’s decision to aid Britain during the Falklands War was by reminding the President how shoddily Eisenhower had treated Britain over Suez.7

Churchill retained a deep understanding of American history. The late Senator Robert F. Byrd of Virginia marveled at his grasp of federalism. Byrd said the Englishman had a better grasp of the principles of the U.S. Constitution than most Americans.8 Churchill’s constitutional understanding was evident in a speech at Woodford in 1950:

The British race have always abhorred arbitrary and absolute government in every form. The great men who founded the American constitution expressed this same separation of authority in the strongest and most durable form. Not only did they divide executive, legislative and judicial functions, but also by instituting a federal system they preserved immense and sovereign rights to local communities and by all these means they have maintained—often at some inconvenience—a system of law and liberty under which they thrived and reached the physical and, at this moment, the moral leadership of the world.9

Churchill repeated those lines almost word for word a year later. Although he often retreaded a favourite phrase, this is one of the few cases where he repeated an entire paragraph. He knew his subject well.

See also “Americans will always do the right thing…”

3 Winston S. Churchill, “While the World Watches,” Colliers, 29 December 1934, republished as “Roosevelt from Afar,” in his book Great Contemporaries, revised and extended edition, 1938. The essay was diplomatically deleted from wartime editions of Great Contemporaries, but reinserted in postwar editions.