Churchill and the Presidents: Warren Harding 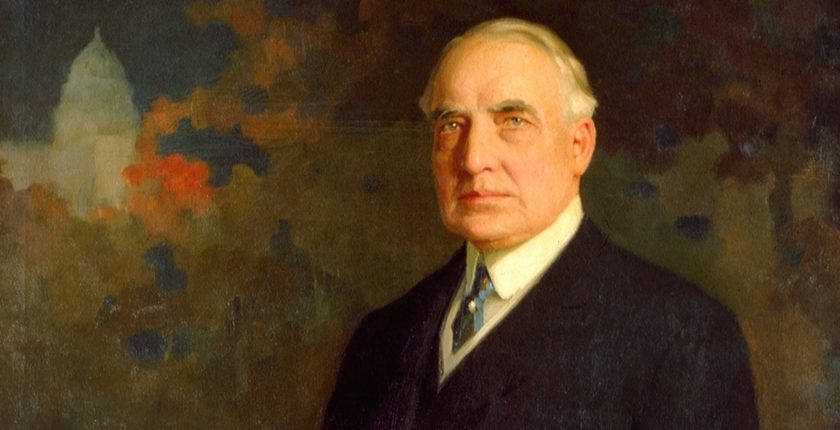 Winston Churchill interacted with eleven U.S. presidents—as many as the Queen. He did not meet all of them, as she has; but you can trace their influence on his thought and principles as you read.

As we often do after a convulsive presidency, Americans in 1920 elected what seemed to be a sensible conservative, Warren Harding, who quickly became mired in scandal, then died in office. He was succeeded by his safe and judicious vice-president, Calvin Coolidge. It was rather like going from Lyndon Johnson to Richard Nixon to Gerald Ford—who, like Coolidge, had never wanted the job.

Churchill took over the Colonial Office three weeks before Harding took over the White House. Despite Senate rejection of the League of Nations, Harding claimed the right to be consulted over League mandates, which many Americans regarded as fig leaves for empire-building. Churchill, probably with tongue in cheek, responded by proposing that Harding take the mandates of Palestine and Mesopotamia—“Messpot,” as he called it—today’s Iraq. Of course Churchill knew Harding would never accept such involvement. The mandates remained British until Iraq and Israel achieved independence, in 1931 and 1948 respectively. Many Britons, including Churchill over Iraq if not Palestine, would come to regret that they had ever accepted either.

In late 1921, President Harding offered to host a conference to regulate the limits of fighting navies, hoping to prevent the kind of naval arms race that had preceded the Great War. “I have high hopes of this Washington Conference,” Churchill responded. “It has been called together by President Harding in a spirit of the utmost sincerity and good will.”

In the Washington Naval Treaty the great powers agreed to a capital ship tonnage in the ratio of 5:5:3 for Britain, the U.S. and Japan. Churchill was pleased at the time, though he later wondered what all the fuss was about: “If the idea of a hostile United States is not ruled out, this Treaty is impossible,” he exclaimed in Parliament; “if it IS ruled out, it is quite unnecessary.” Incidentally, the treaty enabled Japan vastly to expand her submarine and cruise fleet—which would have its consequences two decades later.