Churchill and the Presidents: Theodore Roosevelt 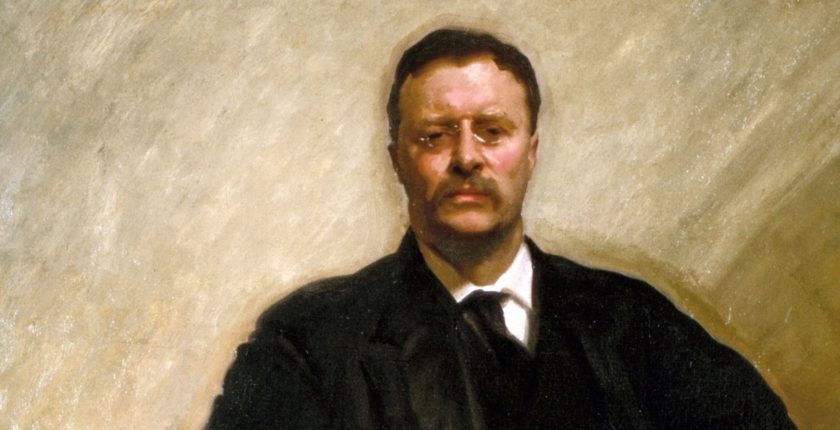 Churchill, aged 26, and Teddy Roosevelt, aged 42, got off to a thoroughly bad start. In 1900 Churchill’s mentor, Congressman Bourke Cockran, had taken Churchill to Albany to meet the governor and vice-president-elect, who had charged up San Juan Hill two months before Churchill had charged at Omdurman. Again young Winston declared approval. But Roosevelt, doubtless aware of his visitor’s reputation as a publicity hound, did not return the compliment.

“I saw the Englishman, Winston Churchill…he is not an attractive fellow,” Roosevelt confided to a friend. That impression proved as enduring as the parallelism in their careers. Both would switch parties. Both would achieve the highest office. Both would win a Nobel Prize. TR was, incidentally, the most prolific presidential book writer, with 18 (Nixon 12), against Churchill’s fifty-one, though Roosevelt wrote mostly about hunting and outdoor life.

When Churchill published Lord Randolph Churchill in 1906, TR was still hostile: “I dislike the father and dislike the son,” he told his best friend, Senator Henry Cabot Lodge. “…while the biographer and his subject possess some real far-sightedness…both possess or possessed such levity, lack of sobriety, lack of permanent principle, and an inordinate thirst for that cheap form of admiration which is given to notoriety, as to make them poor public servants.”

But Churchill went out of his way to smooth Anglo-American relations. As Undersecretary for the Colonies in 1906, he defended the right of Americans to recruit Jamaicans to work on the Panama Canal, despite violent objections by Jamaica’s governor. Then the governor wrote a scathing letter to an American admiral, who had sent sailors from his ship in Kingston harbor to help out after a hurricane. Churchill called the governor an ass and caused him to resign.

Perhaps this eased Roosevelt’s opinion slightly because, when planning his own African safari two years later, TR praised Churchill’s travelogue, My African Journey. “I should consider my entire African trip a success if I could…find the game as Churchill describes it,” TR wrote his Ambassador to Britain, Whitelaw Reid. This must have reached our author, who sent the President an inscribed copy of his book. “I do not like Winston Churchill but I supposed I ought to write him,” TR said.

“I have just received the beautiful copy of your book,” he wrote, “and I wish to thank you for it. I had read all the chapters as they came out, with a great deal of interest; not only the chapters upon the very important and difficult problems of the Government itself, but also the hunting chapters and especially the one describing how you got that rare and valuable trophy, a white rhinoceros head. Everyone has been most kind to me about my proposed trip to Africa. I trust I shall have as good luck as you had.”

Churchill’s reply to this singularly restrained encomium, if any, has not been preserved.

Alas, TR reverted to first impressions. To Lodge from Africa he referred to their friend the American novelist: “I mean, of course, OUR Winston Churchill, Winston Churchill the GENTLEMAN.” Representing the U.S. at the funeral of Edward VII in 1910, he wrote pettily: “I have refused to meet Winston Churchill, being able to avoid any scandal by doing so. All the other public men, on both sides, I was glad to meet.”

Among the public men he met, TR wrote that he “took a real fancy” to Lloyd George, who was an old smoothie compared to the brash young Winston.

Churchill rehabilitated himself slightly when World War I started in 1914. “I have never liked Winston Churchill,” Roosevelt wrote to an English friend, “but in view of what you tell me as to his admirable conduct and nerve in mobilizing the fleet, I do wish that if it comes your way you would extend to him my congratulations on his action.”

Churchill paid TR a huge return compliment—an almost unbelievable proposal in April 1918. Lenin, in power in Moscow, and had taken Russia out of the war. So Churchill proposed that the Allies send a plenipotentiary to Moscow—a “commissar” as he called him—and nominated Theodore Roosevelt. Then, in exchange for Lenin reentering the war, the Allies would “safeguard the permanent fruits of the Revolution”!

“Let us never forget,” Churchill told Lloyd George, “that Lenin and Trotsky are fighting with ropes round their necks. They will leave office for the grave. Show them any real chance of consolidating their power…and they would be non-human to embrace it.”

Sir Martin Gilbert told me that he first broke this astounding revelation in a Moscow lecture to an audience of high-ranking Soviet officers. “You could have heard a pin drop,” he smiled.

Churchill’s radical notion proved rather too imaginative for his colleagues, and he soon concluded that the Bolsheviks actually were non-human after all. “Baboons” he liked to call them. But the incident serves to display how singleminded he was about defeating the enemy at hand—and the depth of his regard for Theodore Roosevelt.