The Churchill Project - Hillsdale College > Articles > Explore > Churchill in the Nuclear Age > Ghost in the Attic (2): Churchill, the Soviets and the Special Relationship

Ghost in the Attic (2): Churchill, the Soviets and the Special Relationship 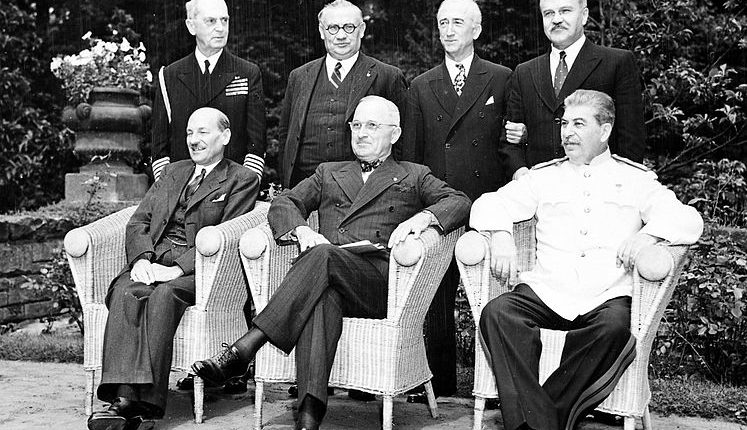 Emerson posited that “foolish consistency is the hobgoblin of small minds.” On Stalin and the Soviet Union, Churchill hardly seemed consistent, foolishly or otherwise. Or was he? In his earlier years he’d advocated the destruction of the Soviet system. What then about his later flirtations with rapprochement and even alliance with Moscow? What of his 1950s plea for discussions with Stalin’s successors, and where he counseled geopolitical peace not ideological war? An where does that leave the Anglo-American Special Relationship?

In this writer’s opinion his consistency was not foolish, but primarily reserved to the interests of the United Kingdom. He was a great defender of liberty and human rights, a nationalist steeped in British tradition. Accordingly the Fulton speech combined hint of a plea for economic aid with a condemnation of Soviet excesses.

We must be careful to distinguish between Churchill’s rhetoric and writings, and his actions, particularly when in high office and when he was responsible for Britain and its Empire. Of course Churchill himself explained his views “a harmonious process which keeps them in relation to the current movements of events.”18 Events, Stalin, the Soviet Union—adversary, rapprochement, ally, confrontation, politics—did move. The contradictory images are obvious. Churchill never let ideology get in the way of practical and prudent politics. He was Cicero, not Cato.

Meaning of a Special Relationship

Churchill had longstanding affection for the United States and called at Fulton for close association with America. That made it seem that he disagreed with Lord Palmerston’s epigram: “Nations have no permanent friends or allies, they only have permanent interests.” Critics have accused him of a sentimental commitment to a relationship that ensured that Britain would “lose” the Second World War even as the Allies won it. “Joseph Kennedy wanted to ‘appease’ Hitler,” one wrote; “Churchill wanted to appease Roosevelt.”19

That distorts Churchill’s thinking. He sought to preserve and expand what he later christened the “special relationship” because it already existed, and because Britain benefitted from that policy. Put another way, it is always better to have as a partner someone who shares your values and ideals in addition to having the wherewithal to help you.

The Special Relationship was not a creation of the Second World War or of the Fulton speech. It was and had been very real for a long time. Common sense dictates that there is a permanent “special” relationship between a colonizer and its colonials, between a “mother” country and its so-called offspring. Simultaneously there are significant differences between this and that empire, this and that colony. The long-term relationship may be positive, combative, benign or competitive. But that it is different and special needs no footnote. “Special” does not mean good, positive, negative, or exploitative. It just means unique, in the proper sense of the word.

After the War of 1812, British-American disagreements were relegated to details, not territory and legitimacy, whatever the sometimes overheated rhetoric. Even the disputes during the American Civil War never rose to crisis level. We do not need a litany of examples (see any good history). Suffice it to say that for two centuries, the Special Relationship has been “the tendency to work together and rise above discord.” Routinely, Britain and America have come to the same broad conclusions, though it “was always a negotiation, not a dictation.”20

Economic and commercial competition was a given, but war was never chosen. The apogee of that relationship may have come during the Second World War, but its origins and present persistence suggest that there is much more to it than just a necessary alliance against a clear and present danger.

Certainly Josef Stalin treated the Special Relationship as a very real thing. When Roosevelt tried to distance himself from Churchill in attempts to convince the Soviet leader that the British and Americans were not ganging up on him, Stalin routinely cautioned associates that the Anglo-Americans were working together. Initiatives proposed by FDR prompted Stalin to ask about Churchill’s thoughts.

But was the relationship as tight as Stalin thought it was? Roosevelt and Churchill were not in lockstep on how to deal with their indispensable ally. But both recognized that victory over Hitler’s Germany required the Red Army. End of discussion. Compromise and consideration for each other’s arguments were in order, always facilitated by the growing personal relationship between Churchill and Roosevelt.

After Germany’s June 1941 attack on Russia, Roosevelt and Churchill both believed that Soviet survival was essential if Germany was to be contained and defeated. Despite the gloomy predictions of their military advisors, both made commitments of aid to the Russians. Presciently, Roosevelt successfully prevented attempts to exclude the Soviet Union from obtaining Lend-Lease aid (March 1941). But U.S. war production was only beginning to gear up, and there was not much aid to send. Churchill, understandably reluctant to share military aid going to Britain, agreed to limited diversions of those supplies.

The Battle of Moscow (December 1941) stopped the German advance. Stalin then revived his efforts for a formal wartime alliance and for agreement on restoration of the Soviet boundaries before the German attack. This included the return of the Baltic states which had been ruled by the Russian czars. (That they’d been run mainly by German-Balt landowners was conveniently set aside.)

Churchill initially agreed while Roosevelt demurred, saying such boundary adjustments should await the end of the war and a peace conference. By war’s end, the two had switched their positions. Roosevelt had agreed to Soviet rule of the Baltics, Churchill moving toward challenging expanding Soviet control. Those differences have been discussed and debated extensively, but often without alluding to the key point: the AASR was not broken or even challenged by their differences.21

That pattern continued throughout the war: during the period of rough Anglo-American equality; after the American manpower and machines became overwhelming; and at the great wartime conferences between Churchill and Roosevelt. It was still there during their tripartite meetings with Stalin at Teheran and Yalta.

Even Churchill’s two private get-togethers with Stalin (meetings to which FDR had no objections) caused not a ripple in the Special Relationship.

Roosevelt once tried secretly to arrange a private meeting with Stalin, fearing Churchill’s pre-war open hostility toward the “Bolsheviks.” Churchill’s feelings were hurt when he found out, but the relationship hardly wobbled.

The much publicized great arguments within the AASR over grand and even theater/operational strategy were fully and well argued, and settled amiably (though sometimes amiability took a few months). The military staffs of both leaders were told at the Atlantic conference (August 1941) and thereafter that they had to work together and not bring disagreements directly to the President or the Prime Minister to settle; an injunction that Roosevelt and Churchill themselves followed by working together.

The over-argued matter of an all-out versus a series of peripheral invasions of western Europe always related to the Russians. By the end of 1942, Roosevelt and Churchill had reached broad agreement on using the wartime alliance (coalition). They saw it as a way to build Russian confidence that they could work with the Anglo-Americans in war and peace to follow. Both Roosevelt and Churchill consistently feared that Stalin might negotiate with the Germans. So FDR  believed that building confidence was the only way to create a lasting peace. (Fifty years or so was his prediction.)

Churchill was cautious, sometimes edgy, but he loyally stuck with that agreement until after the Yalta conference (February 1945). Subsequent developments made him think again. Then Roosevelt died in April. Soon Churchill and the successor Labour government moved toward challenging Soviet expansion in East-Central Europe, as did the Truman administration. Absent Roosevelt, the personal relationship of Anglo-American leaders became more formal, but the Special Relationship rolled on.

What may we derive from all this? Clearly, most Anglo-American debates during and after the war depended or at least touched on relations with the Soviet Union. Even the sometimes angry debate over European colonialism prompted Stalin to jump in. He declared that after the war all States would be very “nationalistic….

The feeling to live independently would be the strongest. Later, economic feelings would prevail, but in the first period they would be purely nationalistic and therefore groupings would be unwelcome. The fact that Hitler’s regime had developed nationalism could be seen in the example of Yugoslavia where Croats, Montenegrins, Slovenes, &c. all wanted something of their own. It was a symptom.22

Stalin was right. A half-century after the Second World War, nationalism would confront and confound the Soviet Union, and then the Russian republic. But nationalism had another face. In August 1941 the challenge seemed to come from the Atlantic Charter. That informal but widely publicized Churchill-Roosevelt communique stated: “they respect the right of all peoples to choose the form of government under which they will live.”

Churchill knew that old-style empire was a thing of the past, but he was not sure what should come next. He was angered by what he viewed as Roosevelt’s interference in imperial affairs, just as FDR was annoyed that Churchill seemed not to understand the international tensions created by European empires. But they agreed to disagree. FDR stopped his public pushing. For awhile, Churchill moved on, and the Special Relationship continued, strong as ever.

Churchill’s prescriptions set out in the “Sinews of Peace” speech pivoted on the AASR. American economic leadership and help was a sine qua non. Standing up to (containing) the Soviet Union took U.S. military strength and statesmanship. The AASR ensured that Great Britain would be part of the process, not merely party to it.23

The Special Relationship has, in the last two decades or so, generated a corps of British skeptics.  John Charmley and Alex Danchev, representing two very different starting points, come to mind. But there are more recent, more vocal voices. In some cases that stems from searching for an explanation of why Britain became a not-so-great power despite victory in the Second World War. Their answer? The Americans. For those who viewed the European Union as Britain’s future, escaping the Special Relationship was essential to redirecting Britain’s focus toward Europe. For those who thought otherwise, the Special Relationship still has its uses.

21 The latest entry into the lists is Kaarel Piirmäe, Roosevelt, Churchill, and the Baltic Question: Allied Relations during the Second World War (New York: Palgrave Macmillan, 2014). See also Richard M. Langworth, “Churchill and the Baltic” on this website.

Warren F. Kimball is Robert Treat Professor (emeritus) at Rutgers University. The author of Forged in War and The Juggler: Franklin Roosevelt as Wartime Statesman, he edited the three-volume annotated collection of Churchill-Roosevelt Correspondence. He has published over 50 essays on Churchill, Roosevelt and the era of the Second World War. His institutional history, The United States Tennis Association: Raising the Game, was published in December 2017. Most recently he was Jones Distinguished Professor at Wofford College, Spartanburg, S.C., in spring 2019.