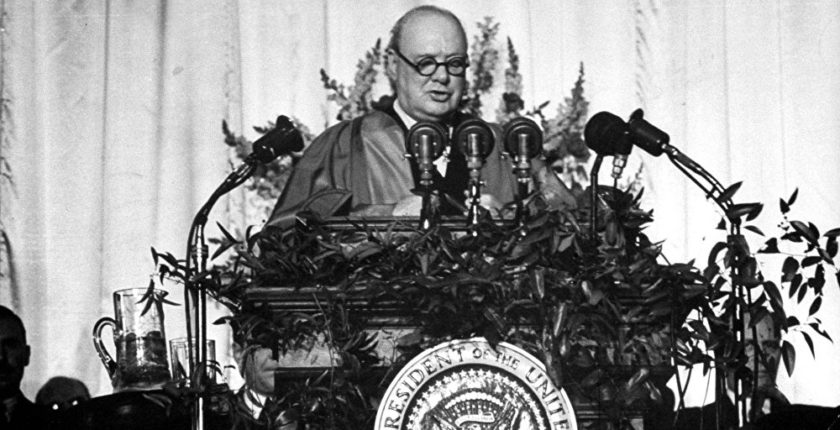 The Fulton speech and its aftermath

Initially condemned as a warmonger for telling the truth about Soviet intentions in his “Iron Curtain” speech, Churchill was soon acknowledged as a prophet—sometimes by the same individuals and media who excoriated him in 1946.

We are asked to review Churchill’s reactions to the condemnation following that famous Fulton speech, the opening gun of the Cold War. “I know he had the hide of an elephant,” our questioner writes, “but how did he react to it all?” Readers interested in the complete background may like first to watch or read three pertinent presentations, the first being the speech itself:

Churchill took the early flak over Fulton rather well, and never backed off.  He knew he was right, and by 1948 it was generally proven. Over the next few years, he often alluded to his Fulton forecast. It is interesting to juxtapose his references with observing what was actually going on in eastern Europe around the same time.

Joseph Stalin’s 9 February speech had declared that the nature of capitalism made future wars inevitable. There was no murmur about that, but plenty for Churchill at Fulton next month. “Pravda accused him of trying to destroy the United Nations,” wrote Sir Robert Rhodes James. “Stalin declared that Churchill called for war against the Soviet Union. In the House of Commons, Prime Minister Attlee pointedly declined comment on ‘a speech delivered in another country by a private individual.’”1

President Truman, who had accompanied Churchill to Fulton and smiled and nodded as he spoke, suggested that Marshal Stalin might like to present his side of the story. In the event, “Uncle Joe” did not take up this invitation.

Three days after his Fulton speech Churchill addressed the General Assembly of Virginia. “Do you not think you are running some risk in inviting me to give you my faithful counsel on this occasion?” he asked. “You have not asked to see beforehand what I am going to say. I might easily, for instance, blurt out a lot of things, which people know in their hearts are true, but are a bit shy of saying in public, and this might cause a regular commotion and get you all into trouble.”

“I do not wish to withdraw or modify a single word”

Churchill was determined to “blurt out a lot of things.” A week later he had his opportunity.

When I spoke at Fulton ten days ago I felt it was necessary for someone in an unofficial position to speak in arresting terms about the present plight of the world. I do not wish to withdraw or modify a single word. I was invited to give my counsel freely in this free country and I am sure that the hope which I expressed for the increasing association of our two countries will come to pass, not because of any speech which may be made, but because of the tides that flow in human affairs and in the course of the unfolding destiny of the world.3

On 23 October, soon after Bulgaria slipped behind the Iron Curtain, Churchill looked back again:

Eight months ago, I made a speech at Fulton in the United States. It had a mixed reception…and quite a number of Hon. Members of this House put their names to a Motion condemning me for having made it [but today] it would attract no particular attention….

It was easier in Hitler’s day to feel and forecast the general movement of events. But now we have not to deal with Hitler and his crude Nazi gang. We are in the presence of something very much more difficult to measure. We are in the presence of a collective mind whose springs of action we cannot judge. Thirteen men in the Kremlin hold all Russia and more than a third of Europe in their grip. Many stresses and pressures are working on them. These stresses and pressures are internal as well as external. I cannot presume to forecast what decisions they will take.4

Churchill had referred to “thirteen men in the Kremlin,” not Stalin, whom he knew held the reins. After the Fulton speech, Truman had invited Stalin. Do these gestures suggest a fitful belief that Stalin might yet be brought round? Yet Harry Truman was nothing if not a realist. By March 1947, when he proclaimed the Truman Doctrine, he had seen reports of desperate conditions in Europe that would lead to the Marshall Plan. Churchill viewed Truman’s actions with satisfaction. This was not, he said in September, the isolationist America of the years after World War I:

…if I repeated the Fulton speech in America today, it would be regarded as a stream of tepid platitudes…. I am very glad we are able to give our full support to the United States in the efforts she is making to preserve Freedom and Democracy in Europe, and to send food to its distressed and distracted countries. We hear a great deal of the “Dollar Shortage.” What are dollars? Dollars represent the toil and skill and self-denial of scores of millions of American wage earners, which they are contributing of their own free will, in most cases without any hope of repayment, to help their fellow-men in misfortune across the ocean. Such a process should be treated on all occasions with the respect which is its due. No country in the world has ever done anything like it on such a scale before.5

In January 1948, hoping Truman had brought equilibrium to Europe, Churchill returned to his Fulton theme of peace through understanding:

I last spoke on these questions in the House in October, 1946, fifteen months ago. I venture, by the way, to refer to what I have said in the past, because I do not speak on these matters on the spur of the moment, but from a steady stream of thought which I have followed and pursued with a study and experience of these matters over many years….

It is idle to reason or argue with the communists. It is, however, possible to deal with them on a fair, realistic basis, and, in my experience, they will keep their bargains as long as it is in their interest to do so, which might, in this grave matter, be a long time, once things were settled.6

A month later Czech communists deposed President Edvard Beneš, with the same celerity as Hitler had in 1938. In June, Stalin solidified his grip on Hungary and began the blockade of Berlin. Truman, with Churchill’s support, replied with the Berlin Airlift. In August the Churchills were at Hôtel du Roy René in Aix-en-Provence, with daughter Mary and Christopher Soames. “The news from Berlin & from Moscow is frightening,” Mary wrote in her diary. “I wonder if I shall live to set out on a holiday which is not overshadowed by some impending world disaster?”7

11 May: Soviet blockade of Berlin ends

World events of 1949 were no less fraught. Speaking at M.I.T.’s Mid-Century Conference in March, Churchill once more alluded to his Fulton speech, now three years ago. The criticism he had borne after Fulton was no more. Now he was vindicated, and gratified:

Three years ago I made a speech at Fulton under the auspices of President Truman. Many people here and in my own country were startled and even shocked by what I said. But events have vindicated and fulfilled in much detail the warnings which I deemed it my duty to give at that time. Today there is a very different climate of opinion. I am in cordial accord with much that is being done. We have, as dominating facts, the famous Marshall Aid, the new unity in Western Europe and now the Atlantic Pact.

No one could, however, have brought about these immense changes in the feeling of the United States, Great Britain and Europe but for the astounding policy of the Russian Soviet Government….Why have they done it? It is because they fear the friendship of the West more than its hostility. They cannot afford to allow free and friendly intercourse to grow up between the vast areas they control and the civilized nations of the West. The Russian people must not see what is going on outside, and the world must not see what goes on inside the Soviet domain.8

M.I.T. was the end of a chapter that began at Fulton. Everything Churchill had forecast, and much of what he’d wished for, had come true. But the three years had provided him with a further message. It applies very well to our own baffling times:

One of the questions which you are debating here is defined as “the failure of social and political institutions to keep pace with material and technical change.” Scientists should never underrate the deep-seated qualities of human nature and how, repressed in one direction, they will certainly break out in another. The genus homo—if I may display my Latin…still remains as Pope described him 200 years ago:

Placed on this Isthmus of a middle State,
A being darkly wise and rudely great…
Created half to rise and half to fall;
Great Lord of all things, yet a prey to all;
Sole judge of truth, in endless error hurled;
The glory, jest and riddle of the world.

In his introductory address, Mr. Burchard, the Dean of Humanities, spoke with awe of “an approaching scientific ability to control men’s thoughts with precision.”9

I shall be very content personally if my task in this world is done before that happens. Laws just or unjust may govern men’s actions. Tyrannies may restrain or regulate their words. The machinery of propaganda may pack their minds with falsehood and deny them truth for many generations of time. But the soul of man thus held in trance or frozen in a long night can be awakened by a spark coming from God knows where and in a moment the whole structure of lies and oppression is on trial for its life.

Let us hope so.