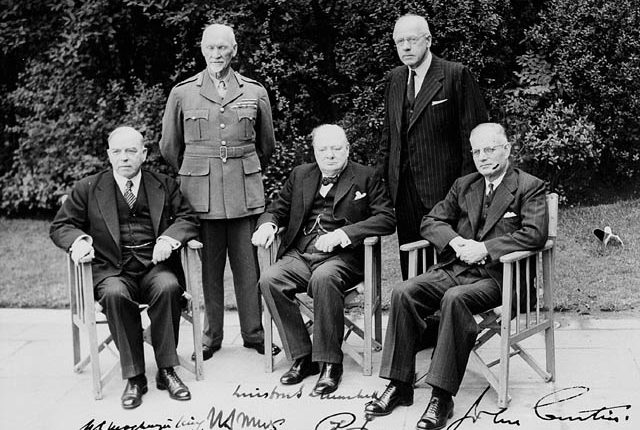 Faithful till the end 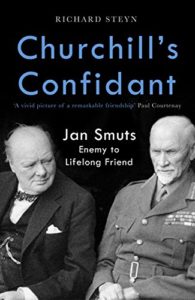 Among many close personal friendships that Churchill enjoyed in political and military life, one of the more unlikely was with a former foe, the South African statesman Jan Christian Smuts. Richard Steyn, a graduate of Stellenbosch University, practised as a lawyer before switching to journalism. His book begins with details of Smuts’s early life, from his birth on 24 May 1870 on an isolated farm in Cape Colony. His deeply Calvinist, well educated parents were of Dutch origin. His father was a Boer farmer and member of the Colonial Parliament.

Born to Afrikaans-speaking parents, Smuts encountered English for the first time at age twelve. A brilliant student, he won a scholarship to Cambridge University, where in 1894 he graduated with a “double first.” He passed the bar exams and a Cambridge career beckoned. But he chose to return to Cape Town, where he was admitted to the Cape Bar in 1895.

Steyn writes that until 1895 South Africa was a “rock of solidity between Cape Dutch and Cape English.” Cape Colony’s prime minister was none other than Cecil Rhodes. But that year, Rhodes’s right hand man, Leander Starr Jameson, led an ill-fated raid designed to overthrow the Paul Kruger administration in the Transvaal and seize control from the Boer majority. Smuts was contemplating a parliamentary career, but with unrest increasing, he moved to the Transvaal, where Kruger appointed him state attorney at the tender age of twenty-eight.

British colonial secretary Joseph Chamberlain was determined to redress grievances of British subjects in the Transvaal. He instructed his high commissioner Lord Milner to take a hard line. In late 1899, Kruger and Smuts met with Milner, but negotiations failed. The Boers—“to universal astonishment,” Steyn writes—“went to war with the mighty British Empire.”

With hostilities imminent, twenty-five-year-old Winston Churchill arranged a lucrative contract with The Morning Post as a war correspondent. On 15 November 1899 Churchill, impatient to see action, boarded an armoured train on a reconnaissance mission to probe Boer lines.

Boer General Louis Botha ordered rocks strewn along the tracks, which derailed three armoured cars. Under fire, Churchill showed great gallantry in directing the track-clearing. This enabled the locomotive and half the train, carrying the wounded, to get away. Young Winston and the remaining soldiers were captured.

Purely by chance, Jan Smuts was visiting the front at the time. While there is no evidence that he and Churchill exchanged words, Smuts later recalled that “Winston was a scrubby, squat figure of a man, unshaved. He was furious, venomous, just like a viper.”

Churchill contended that as a journalist, the Boers had no right hold him. The Boers replied that war correspondents do not usually take command of troops or carry arms. Steyn recounts Churchill’s frustration at being incarcerated, and the familiar story of his escape. Seasoned Churchill readers may prefer to skim this familiar ground.

The Boer capital Pretoria fell in June 1900, but the Boers divided the remnants of their army into three guerrilla groups, one led by Smuts. Steyn writes that Smuts, like Churchill, was also an escapee: “Smuts and his men evaded capture and caused the British much inconvenience and many casualties.”  The British placed £1000 pounds on Smuts’s head. Comparing this to Churchill’s mere £25 bounty must have amused him later.

Eventually the Boers entered peace talks and the Treaty of Vereeniging was signed on 31 May 1902. Discussions on future government exposed an issue Steyn says would “dominate and bedevil South African politics for the next century and beyond”—racial separation, or Apartheid.

To the Boers it was non-negotiable that the franchise would only be open to the white population. This was contrary to Cape Colony’s principle of a non-racial, qualified franchise, entrenched since 1853: “Any man who owned property worth £25 was entitled to vote or stand for election.”

Louis Botha sent Smuts to England to negotiate. In January 1906, Smuts met Churchill, now Undersecretary for the Colonies. Churchill was skeptical of “a conquered people being allowed to govern themselves.” But the Prime Minister, Sir Henry Campbell-Bannerman, supported Boer demands and Parliament approved self-government. Churchill wrote Smuts: “I am not without hope that the darkest days of South African history have drawn to their close.” In May 1910, the Union of South Africa was established, with Botha as Prime Minister and Smuts as Minister of Defence.

At the outbreak of the First World War, Britain requested that South Africa invade German South West Africa. In spite of pro-German sentiment by many Boers, 50,000 South Africans routed 8000 Germans—the first Allied victory in the war. In 1916 Smuts was appointed a lieutenant-general. His reputation cemented, Smuts accepted a 1917 invitation to join the Imperial War Cabinet. He was sent by Prime Minister Lloyd George to assess the situation on the western front.

At war’s end, Smuts wrote to Churchill: “We shall always look back upon those fierce crowded days and in them I shall always see your friendship and wise counsel.” Smuts was a reluctant signatory to the Peace Treaty. Like Churchill, he was opposed to the harsh treatment of Germany.

Botha died in 1919 and Smuts returned to South Africa, where he became prime minister. But his party was defeated five years later. Despite his international reputation, the rival National and Labour parties portrayed him as an imperialist and a puppet of mine owners.

Churchill was out of office even earlier, at odds with his party over Indian self-government, and a charismatic Indian activist, Mohandas Gandhi. (Years earlier, when Gandhi was in South Africa promoting the rights of local Indians, Smuts resisted, maintaining that this would lead to equal rights for blacks, too. Churchill then was sympathetic, and earned Gandhi’s appreciation. But Gandhi specifically did not include blacks in his campaign for equality.)

In 1933 South Africa followed Britain with a coalition government, and Smuts became deputy to Prime Minister J.B.M. Hertzog. In 1939 South Africa joined Britain in declaring war on Germany. Churchill wired Smuts: “I rejoice to feel that we are once again on commando together.”

The trouble with the Duke

As prime minister, Churchill received firm support from Smuts except in May 1942. Wishing to place the Duke of Windsor “out of harm’s way,” he asked Smuts what South Africa would think if he appointed the Duke Governor of Southern Rhodesia. That, Smuts politely replied, “might be embarrassing to the best friends of continued co-operation of South Africa in the Commonwealth under the Crown.” The Duke was sent to the Bahamas!

They met personally in Cairo in August 1942, where Churchill needed to change the Middle East command. Smuts proved a canny advisor. “Like Winston,” wrote Churchill’s doctor Charles Wilson, “he is sure that there is nothing in the world which he could not do as well as anyone.” Churchill flew on to Moscow to beard Stalin in his den. On his return Smuts wrote: “After your Herculean labours, I implore you to relax. You cannot continue at the present pace. Please follow Charles Wilson’s advice as you expect the nation to follow yours.”

In October 1942 Smuts was in Britain for War Cabinet and Defence Committee meetings. On the 21st he addressed both Houses of Parliament. Thanking Smuts for his speech, Churchill said: “The wisdom he brings, the knowledge which he has… are invaluable to those of us who are charged with executive responsibility and is a comfort and an inspiration. All that he has said arises from profound reflection—full of knowledge and resolute, unflinching, inflexible conviction and courage.”

Richard Steyn has sought out insightful quotations. One is by Churchill’s private secretary, Jock Colville: “There were very few of Churchill’s colleagues in the British Government whose words carried the same weight” as Smuts. Another was Harold Macmillan: Smuts “is going to stay [in England] more or less permanently. This is most fortunate for us all. He has all the qualities which will make him an admirable addition to the P.M. And it will be very good for Winston to have a colleague older than himself whom he cannot browbeat.”

Nor does Mr. Steyn miss the amusing recollection of Lord Mountbatten, proving Macmillan’s contention. After a long, drawn-out dinner and a film show at Chequers, Churchill exclaimed: “Well, Gentlemen, now we will start work.” “No,” said Smuts, “I am not going to be a party to killing your chiefs of staff. Here they have to be back in the office by 9 o’clock in the morning, ready for meetings at 9.30; you will still be in bed with a fat cigar, dictating to your secretary.”

With that, Smuts got up and went to bed. “There was a stunned silence,” Mountbatten continued. “After a long pause, Winston stood up and said, ‘Well Gentlemen, perhaps we’d better go to bed.’ That was the only time we got off.”

In England in April 1944, Smuts attended a Commonwealth prime ministers meeting to discuss the future United Nations Charter. There Steyn detects the first softening of Smuts’s racial attitude. The PMs, Smuts said, should “declare our faith in basic human rights” and “the enlargement of freedom.” Steyn admits Smuts did not see this as conflicting with his Government’s treatment of black South Africans. To him, “basic human rights” meant “protection against invasion, freedom of religion, and freedom of expression; but not political or rational equality.” He was not there yet.

Concerning D-Day, Steyn reveals, Smuts had more doubts than Churchill, but thankfully the invasion was a success. When Smuts sent congratulations on his 70th birthday Churchill replied: “Of all the messages which reached me on my birthday, none was more movingly phrased or gave me greater encouragement than yours, my old and trusted friend.”

Neither of them intended to retire after the war, but the 1945 election ended Churchill’s premiership. Smuts politely congratulated Attlee for a “brilliant victory,” raising his friend’s hackles. “If he had just congratulated him of his victory it would have been different,” Churchill sniffed. “Why brilliant? It wasn’t brilliant at all.” The tiff quickly eased when Smuts sent his friend “some of the best South African brandy and sherry.”

Then in 1948, Smuts joined Churchill on the sidelines. He lost a general election to the hard-line, pro-Apartheid National Party. Smuts may have lost because he endorsed the Fagan Commission, urging the relaxation of segregation. Jan Smuts too was “evolving.”

When Churchill narrowly missed regaining office in 1950, Smuts sent his regrets, adding: “your own stock stands very high and complete victory in the near future appears a certainty.” It was, but Smuts didn’t live to see it. He died on 11 September 1950.

Richard Steyn has offered valuable new information and insights in a readable account of an important friendship. Just how important is suggested by a remark Churchill made to his friend Brendan Bracken. When Bracken made a dismissive remark about Smuts, Churchill, who rarely criticized him, shot back: “My faith in Smuts is unbreakable.”

Smuts, for his part, said Churchill was “indispensable.” Both were right.