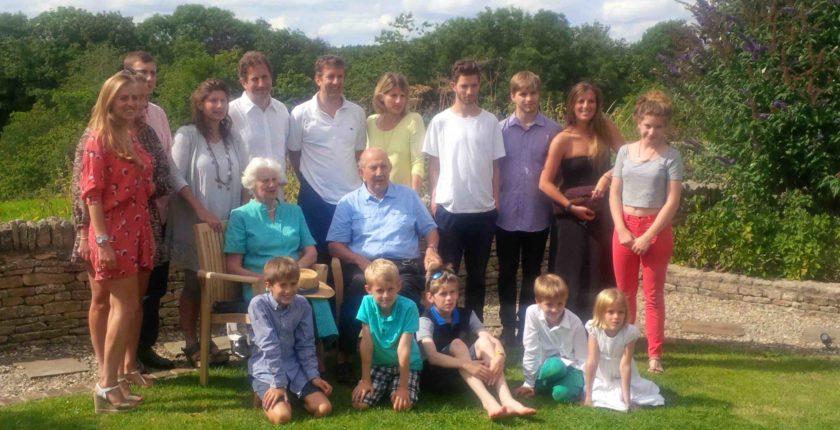 It’s a shopworn phrase, but Paul Courtenay was a walking encyclopedia on Winston Churchill. We worked together on conferences, seminars, books and articles for 30 years. He was a major contributor to Finest Hour, the Hillsdale College Churchill Project, to books and biographies. Paul was indispensable. And irreplaceable.

As editor over those years I was constantly grateful that he was there. I had only to press his Heraldry button, his Smuts button, his World War II button, his Foreign Affairs button, his Book Review button, for exactly what I needed. I never discovered how many such buttons he had. But it was always certain that what we’d get back would be interesting, meticulously accurate, and exactly the right length. Click on any of the links above and you will see what I mean. I don’t know a better definition of a pro.

“Up, up the long delirious burning blue”

Paul Courtenay was born 6 March 1934 to William and Greta Courtenay. His early life was spent in aviation’s most exciting era of progress and discovery. Father William was a founding member of the Royal Air Force, an aviation writer and correspondent. His godmother was the great aviatrix Amy Johnson, the first woman to fly solo from Britain to Australia.

Paul went to prep school at Cottesmore, West Sussex, and grew up in North Wales as the Second World War raged. He enrolled at Malvern College, Worcestershire, where he earned high academic marks and excelled at cross country. Paul was only 18 when he joined the British Army. “One of his earliest assignments,” his son James says, “was to guard the route along the Mall at the Queen’s Coronation in 1953.”

Further assignments saw Paul in Korea at the wind-up of that war, and on peacekeeping duties in Aden and Gibraltar. James writes: “He had deep and abiding friendships in the Royal Sussex regiment, which later merged with three others to form The Queen’s Regiment.” He met Sara, his wife of sixty years, raised four children and celebrated twelve grandchildren. Weeks after marriage he was flying Army Air Corps planes in Kenya. Other postings brought Paul and Sara to Cyprus, Malta, Gibraltar, Germany and America. In England they lived in Kent, Sussex, Surrey and Northern Ireland, before finally settling in Andover, Hampshire. There they lived for 40 years.

Paul’s Churchill connection developed early. His father, lecturing on the war against Japan, sometimes shared a platform with Winston Churchill. William Courtenay was “present at the creation,” as Paul eloquently wrote for Hillsdale:

He was at many of those key campaigns, and he was on board the Missouri, as General MacArthur’s guest, at the hour of victory in September 1945. As supreme commander of occupied Japan, MacArthur rendered further service, building trust with the former enemy as it evolved into a free state. Churchill applauded those events. “We must strive,” he said in 1946, “to redeem and to reincorporate the German and the Japanese peoples in a world system of free and civilized democracy. The idea of keeping scores of millions of people hanging about in a sub-human state between earth and hell, until they are worn down to a slave condition or embrace Communism, or die off from hunger, will only, if it is pursued, breed at least a moral pestilence and probably an actual war.”

“Labouring in the vineyard”

When we met, Paul was about to retire from the Army, which he did in 1987. He then worked in London for the Independent Broadcasting Authority and the Institute of Chartered Accountants. Viewing “retirement” with the same disdain as Sir Winston, he then devoted himself to Churchilliana. Sir Martin Gilbert, who respected Paul’s work, used to refer to this as “labouring in the vineyard.”

Courtenay certainly picked a lot of grapes. A fastidious proofreader, he was soon involved in republication of Churchill classics. Together with James Muller, Paul provided new footnotes to new editions of Thoughts and Adventures and Great Contemporaries. Our last work together was on that gem of a biography, Churchill: Walking with Destiny, by Andrew Roberts. We shared a thousand emails, scrutinizing every paragraph, arguing minute details. It was a tremendously educational experience. There was no vast digital reference at his fingertips; he stored it all in his head. He knew where to look for the tiniest fragment of Churchill lore. I know Andrew agrees that absent Paul Courtenay, history could not have been served so well.

I will say one personal thing about my friend. To any writer, proofreaders and pedants are indispensable. But often when working with them, one is conscious of being patronized. Some are mainly obnoxious snobs whose main purpose is to demonstrate how much they know—and how much you don’t. Of course, no book ever existed without errors. With Paul Courtenay, one never encountered that attitude. He would greet the discovery of an error we’d missed with the same regret as our own. But he would never say, “I told you so.” (Even if he had told us so.)

Thanks to Hillsdale College I do have access to a fair digital reference. Paul’s loss reminded me of Churchill’s tribute to Arthur Balfour in Great Contemporaries. Here again Paul taught me something new. I searched for “shivered into fragments,” thinking the words had only appeared in the Balfour piece. In fact, it was a favorite Churchill phrase. Anyway, anent Balfour and Courtenay, the great man’s words apply equally:

Amid universal goodwill and widespread affection he celebrated triumphantly his eightieth birthday. But thereafter hungry Time began to revenge itself upon one who had so long disdained its menace…. I saw with grief the approaching departure, and—for all human purposes—extinction, of a being high uplifted above the common run. As I observed him regarding with calm, firm and cheerful gaze the approach of Death, I felt how foolish the Stoics were to make such a fuss about an event so natural and so indispensable to mankind. But I felt also the tragedy which robs the world of all the wisdom and treasure gathered in a great man’s life and experience, and hands the lamp to some impetuous and untutored stripling, or lets it fall shivered into fragments upon the ground.