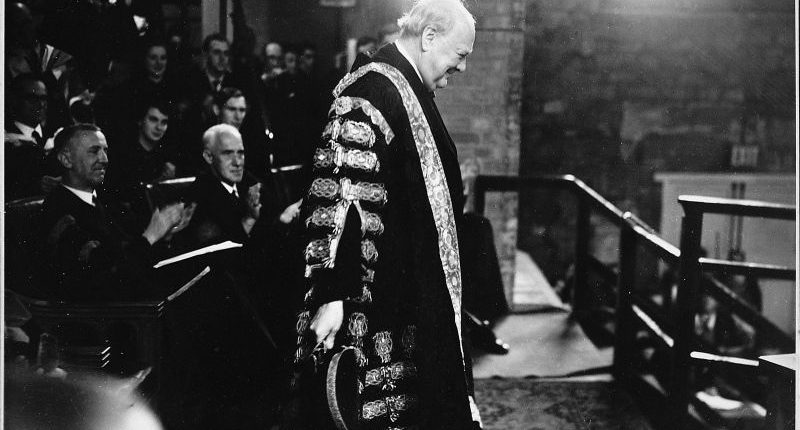 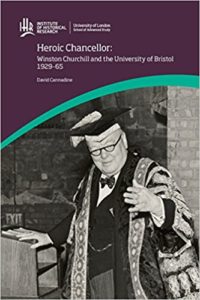 Each British university has a Vice-Chancellor, who is the full-time person in command. Above him or her is the largely ceremonial Chancellor, who graces important events. The Chancellor is also able to keep a proprietorial eye (from a distance) on what is going on. If in a position to do so, he helps the institution overcome any temporary obstacles. Some Chancellors are royal persons. For example, HRH the Duke of Edinburgh in 2011 retired as Chancellor of both Cambridge and Edinburgh Universities after more than sixty years’ tenure.

The British historian Sir David Cannadine takes up Churchill’s long-running chancellorship at Bristol. Cannadine edited the Oxford Dictionary of National Biography, and is now Dodge Professor of History at Princeton.

Sir William McCormick, an academic who had been in charge of disbursing public money to universities, reported to Churchill as Chancellor of the Exchequer. McCormick urged Bristol University to invite Churchill to be chancellor. He was, McCormick said, “a man whose name will live in English history.” This was a prescient remark. By his own admission Churchill was never deemed clever or motivated enough to attend university. In My Early Life he exaggerated his academic weakness. A devastating letter about his shortcomings from his father made a deep impression.

Aware of his disadvantage compared to contemporaries who had been at Oxford or Cambridge, young Winston spent much of his spare time with 4th Hussars in India (1896-99, when not on serving on the North-West Frontier or Sudan) devouring a large number of important books sent by his mother. No light reading list, it included, The Decline and Fall of the Roman Empire, The Rise and Influence of Rationalism, A History of European Morals and The Martyrdom of Man. In effect, Churchill became his own university.

Winston Churchill was installed as Chancellor of Bristol University in 1929. Referring to his own meager education he told the students: “I wonder if you appreciate how lucky you are, how much the gift of education has been valued and counted by those to whom it has been denied.”

…that Churchill was losing face in the 1920s and 1930s because of his involvement with such controversial issues as the General Strike, the Gold Standard and his opposition to the Government of India Bill. Indeed he was nearly deselected by his constituency party at Epping. But Bristol stood by him.

At degree ceremonies he frequently spoke on current events. In May 1939 he brought Joseph P. Kennedy, United States ambassador in London, to Bristol to receive an honorary degree. The author provides an interesting insight into Kennedy’s strong support for Neville Chamberlain’s policy of appeasement and his growing disagreement with Churchill. The award of an honorary degree was, Cannadine suggests, one last, vain, attempt by Churchill to win Kennedy over.

Early in the Second World War Bristol was the target of many heavy air raids. Churchill sent encouraging messages to the university. He proposed honorary degrees for Gil Winant (Kennedy’s replacement as U.S. ambassador), Australian Prime Minister Robert Menzies, and Harvard President James Conant. Churchill proposed the latter two during their visits England. Churchill’s party slept in a special train just outside Bristol, and arrived in the city early Easter Saturday 1941, very soon after a serious air raid which had caused 200 deaths and severe damage. News of his arrival produced cheering crowds, visibly moving the Prime Minister. This timely visit created a special bond with the city and university.

Professor Cannadine shows how Churchill’s link with Bristol University taught him about higher education. His experience of addressing professors and undergraduates was invaluable when many other universities honored him with degrees. Churchill declared that “the duty of universities is to teach wisdom, not trade; and character, not technicalities.” So it was at Bristol that Churchill retained and his longest educational connection.

Churchill’s last visit to Bristol University was in November 1954, shortly before his 80th birthday and five months before his resignation as prime minister. This excellent survey of his belated university experience is an important contribution to a little-known corner of Churchill’s life.

Paul H. Courtenay, a Churchill historian and researcher, was co-editor of new ISI editions of Churchill’s Thoughts and Adventures and Great Contemporaries. He notes: “My father attended the Fulton speech and I remember him telling me all about it quite soon afterwards when I was twelve years old.”