The Churchill Project - Hillsdale College > Articles > Books > Marlborough: In its pages, Churchill laid the basis of his own greatness 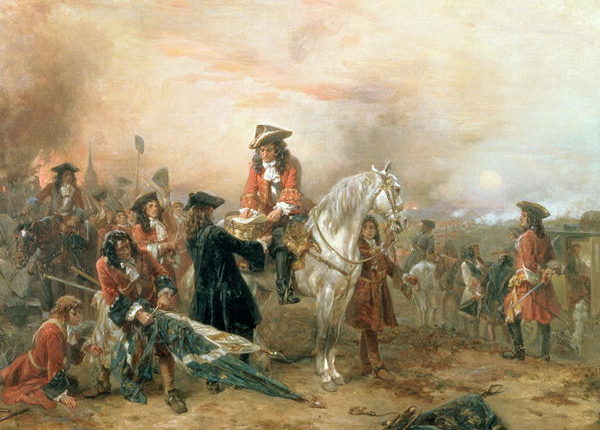 In early October 1933, Winston Churchill published the first volume of Marlborough: His Life and Times. The one-million-word book, published in four volumes between 1933 and 1938, took him as long to research and write as it took Marlborough himself to fight the War of the Spanish Succession.

Churchill told the story of his ancestor in beautiful Augustan Age prose, but also discovered new sources and corrected earlier historians’ errors. Mastering foreign language documents, he produced an outstanding work of history as well as literature, one that appealed to an academic as well as to a popular audience. All this came from someone whose father had said: “He has little [claim] to cleverness, to knowledge or any capacity for settled work.”

Churchill got Marlborough’s birthplace wrong. It was Great Trill in Devon, not Ashe House a mile away. But otherwise his time devouring every book published on Marlborough ensured that his book was remarkably accurate.

Like all of Churchill’s works, Marlborough tells us as much about the author as the subject. He wrote for example, as a supporter of the National Government in the early 1930s, of how during the early 1690s Marlborough “had sunk now to the minor and unpleasant position of being a critic of mishandled affairs whose main intention he agreed.” Churchill’s primary researcher was the young Oxford historian Maurice Ashley. Churchill’s own experiences had been vital, Ashley later wrote: “He could perceive how the minds of statesmen and commanders moved in those far-off times.” When Harold Macmillan delivered Churchill’s eulogy to The Other Club in February 1965, he argued that WSC’s “ten years out of office, when he was writing the life of his great ancestor, Marlborough, laid the basis for his greatness.”

The great classicist and philosopher Leo Strauss saw yet more in Marlborough, in his own eulogy in class at the University of Chicago, 25 January 1965; “Not a whit less important than his deeds and speeches are his writings, above all his Marlborough—the greatest historical work written in our century, an inexhaustible mine of political wisdom and understanding, which should be required reading for every student of political science.”

Dr. Strauss went on to elaborate a wider appreciation of Marlborough’s importance to students and scholars:

The death of Churchill reminds us of the limitations of our craft, and therewith of our duty. We have no higher duty, and no more pressing duty, than to remind ourselves and our students, of political greatness, human greatness, of the peaks of human excellence. For we are supposed to train ourselves and others in seeing things as they are, and this means above all in seeing their greatness and their misery, their excellence and their vileness, their nobility and their triumphs, and therefore never to mistake mediocrity, however brilliant, for true greatness.

Churchill vigorously defended his ancestor’s reputation against the “sneers, calumnies and grave accusations” of the mid-Victorian Whig historian Thomas Babington Macaulay. He went so far as to state of Macaulay: “We can only hope that Truth will follow swiftly enough to fasten the label ‘Liar’ to his genteel coat-tails.” This provoked Churchill’s friend Alfred Duff Cooper: “You reduce yourself to the level of a mischievous schoolboy cocking a snook at the master behind his back,” Cooper scolded. Macaulay’s main charge was that Marlborough was solely self-serving. Of course, the same charge was constantly made against Churchill throughout his life.

Churchill’s strategic views, already profoundly affected by the Great War, developed significantly as he considered how his ancestor approached coalition warfare. “It was a war of the circumference against the centre,” he wrote of the War of Spanish Succession. So it was for Britain after the Dunkirk evacuation in the Second World War. Up until 1710, Marlborough was Captain-General of the Army. He was also prime minister before the invention of the term, and a leader of a coalition of nations that opposed French hegemony. Passages from Marlborough have their counterparts in Churchill’s war speeches, and vice-versa.

Researching and writing this book was therefore the ideal intellectual preparation for the task that fell to Churchill in 1940. He admired his ancestor for the way he created a single strategy above the “intrigues, cross-purposes, and half-measures of a vast unwieldy coalition trying to make war.” Politically he regarded Marlborough as “the greatest servant, who remained a servant, of any sovereign in history.” In a neat sideswipe against Hitler, he wrote of Marlborough: “Not for him the prizes of Napoleon, or in later times of cheaper types.”

Churchill criticised “latter-day generals” for whom “There are no physical disturbances: there is no danger: there is no hurry.… There is nearly always leisure for a conference even in the gravest crisis.” Marlborough, by contrast, “sat [on] his horse, often in the hottest fire, holding in his mind the positions and fortunes of every unit in his army from minute to minute and giving his orders aloud.”

Of Spain’s Charles II, Churchill wrote: “The feeble life-candle of the childless Spanish King, known to his country as Charles the Sufferer, flickered, smoked, guttered, but still burned.” Marlborough perfected “the art of conquest” by his magnanimity in victory, which made “the vanquished grateful for his praise.”

Louis XIV of France held undisputed sway over continental Europe, but Churchill presented Marlborough as seeing himself “advancing at the head of the armies to the destruction of that proud dominion. He may even have seen at this early time the building up upon the ruins of the French splendour of a British greatness which should spread far and wide throughout the world and set its stamp upon the future.”

Churchill was implying, during his Wilderness Years, that what others saw as Marlborough’s betrayal of his side was in fact the start of the glorious period of renewed national liberty that through his leadership led to the breakup of an antagonistic European hegemony and to the greatness of the English-speaking peoples.  Anyone wishing to spot modern parallels was perfectly free to do so.

“Patience! The opportunity will be yours”

Nevertheless, Churchill was under no illusions about his ancestor’s failings. “What a downy bird he was,” he wrote to Clementine in 1935. “He will always stoop to conquer. His long apprenticeship as a courtier had taught him to bow and scrape and to put up with the second or third best if he could get no better. He had far less pride than the average man.” He summed him up as “this valiant, proud, benignant, patient, and, if necessary, grovelling, daredevil and hero.” Churchill himself was impatient, but he did not grovel. Otherwise Marlborough was his role-model.

He presented Marlborough’s avarice—it was said that he did not dot his “i”s in order to save money on ink—as commendable thrift in the light of a penurious youth. He depicted Marlborough’s treachery to James II in the Glorious Revolution in 1688 as an act of profound principle. It altered Britain’s geopolitical trajectory away from a pro-French Catholic tyranny. It marked “the rise of Britain to the summit of Europe, curbing…the overweening power of France.”

Churchill related how, once installed in William III’s favour, Marlborough reconstituted the poorly-constituted English armed forces. He made great strides in their training and discipline and won them victories, but fell into disgrace for ten years. Indeed, he was consigned to the Tower of London in 1692. “Ten years when the chances of a lifetime seemed finally to die were to pass before he was again to exercise a military command,” Churchill wrote. Swap “military command” for “political office” and one has the story of 1929-39. Just as he had with his biography of his own father, Churchill was either consciously or subconsciously moulding that of Marlborough along autobiographical lines.

“As he brooded on these wasted opportunities,” Churchill wrote, “as he no doubt felt how surely and how swiftly he could reshape the scene, and yet how carefully trammelled he was, can we wonder at the anger that possessed his soul? There was no prophetic spirit at his side to whisper, ‘Patience! The opportunity will yet be yours.’ His patience is almost proverbial. He had need for it all.” So did his even greater descendant.

How did Churchill do it?

“You really are an amazing man!” Stanley Baldwin wrote to say. “I look sometimes at that row of volumes in my little library, and I cannot think how you can have found the mere time to have gone through the physical labour alone of writing them. This last book would mean years of work even for a man whose sole occupation was writing history.”

For Churchill, writing history was a natural adjunct to making it. Marlborough might also have been the reason that Franklin Roosevelt started to warm to Churchill, long before they met a second time, at Argentia in 1941.

A reader in America

Hearing that the president’s son James was in Britain, Churchill invited him to Chartwell. After dinner, he asked each guest for their fondest wish. Then it was Churchill’s turn. “I wish to be prime minister and in close and daily communication with the President of the United States. There is nothing we could not do if we were together.” He then took a sheet of paper and drew an intertwined pound and dollar sign. He referred to this as “the Sterling-Dollar.” “Pray bear this to your father from me,” he told James. “Tell him this must be the currency of the future.”

What if, James replied, his father preferred to call it the “Dollar-Sterling”? Churchill beamed. “It is all the same, we are together.” He also gave Franklin Roosevelt a signed copy of Marlborough. He heard later that the president was reading it avidly. Years later, they began a remarkable skein of personal correspondence. “You can always send sealed letters through your pouch or my pouch,” the now-President Roosevelt wrote. “I am glad you did the Marlboro[ugh] volumes before this thing started—and I much enjoyed reading them.” 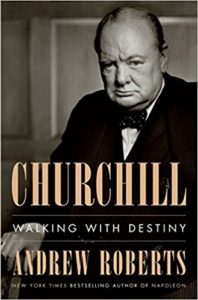 This review of Marlborough: His Life and Times is excerpted from Andrew Roberts’s biography, Churchill: Walking with Destiny. This is the only work meriting two reviews on this website. See Larry P. Arnn, “Man of the Century” and Richard M. Langworth, “The New Churchilliad.”