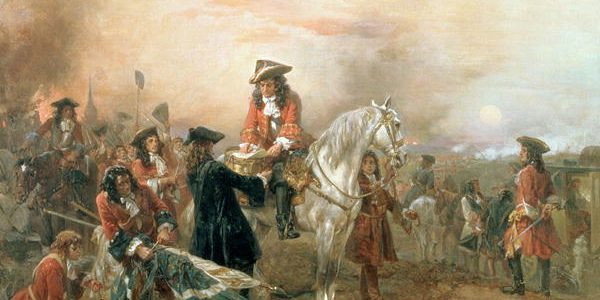 Churchill told the story of his ancestor in beautiful Augustan Age prose, but also discovered new sources and corrected earlier historians’ errors. Mastering foreign language documents, he produced an outstanding work of history as well as literature, one that appealed to an academic as well as to a popular audience. All this came from someone whose father had said: “He has little [claim] to cleverness, to knowledge or any capacity for settled work.”
Posted in: Books,
Tags: Alfred Duff Cooper, Andrew Roberts, Charles II of Spain, First Duke of Marlborough, Franklin Roosevelt, Glorious Revolution, Harold Macmillan, James Roosevelt, John Churchill, Louis XIV, Maurice Ashley, Napoleon, National Government, Stanley Baldwin, The Other Club, Thomas Babington Macaulay, War of the Spanish Succession, William III, Winston S. Churchill,
Read more

Nationalism and Unity: Churchill’s Speech in Holland, 9 May 1946

Speaking of Britain and its Empire in 1941, Winston Churchill said: “We have not journeyed all this way across the centuries, across the oceans, across the mountains, across the prairies, because we are made of sugar candy.”1 A few weeks earlier he had advised the boys at Harrow School: “Never give in—never, never, never, never—in nothing, great or small, large or petty—never give in except to convictions of honour and good sense. Never yield to force; never yield to the apparently overwhelming might of the enemy.”2 The image he conveyed is one of hardiness and personal toughness, and it galvanized his countrymen. Yet we rarely give thought to where he found the hardiness and resilience he conveyed.
Posted in: Churchill's Character, Explore,
Tags: Alan Brooke, Charles Moran, Clementine Churchill, Duke of Marlborough, Elizabeth Everest, Franklin Roosevelt, John Churchill, Joseph Stalin, Mary SOames, Sarah Churchill, Winston S. Churchill,
Read more