Nolan’s Dunkirk: “Don’t Let’s Be Beastly to the Germans” 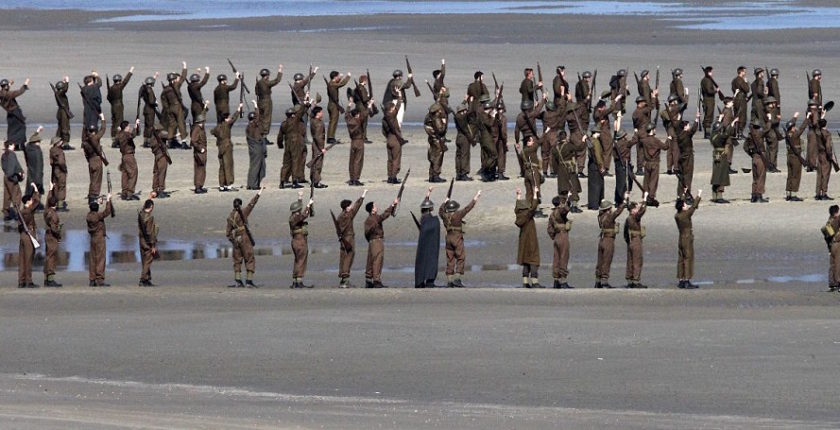 Dunkirk 2017. Avoiding CGI made it hard to convey the real dimensions of the operation.

Featured Image caption: Dunkirk 2017. Avoiding CGI made it hard to convey the real dimensions of the operation (see photo below).

(Published in The Daily Caller, 3 August 2017). Dunkirk, produced by Christopher Nolan, sets out to portray the 1940 rescue of the Allied armies from the clutches of Hitler’s Wehrmacht in terms of courage, heroism, survival, and a few examples of cowardice. In that he succeeds admirably. In terms of context—in conveying an understanding of what Dunkirk was about—he fails utterly.

Mr. Nolan says context wasn’t the aim. Dunkirk is about communal togetherness and universal goodness. But that could be shown on any beach in any war in the last hundred years from Gallipoli to Normandy to Inchon. It’s drama without meaning: good as far as it goes, but not going far enough.

We see this most obviously in the way Mr. Nolan completely overlooks the political background driving the evacuation. Given the frequent misrepresentation of Churchill in films lately, we should perhaps be glad he plays no role. Yet it was Churchill whose call inspired what he called the “spontaneous movement which swept the seagoing population of Britain.” But Churchill would just distract viewers, Mr. Nolan said. He didn’t want to trouble us with “politics.”

Politics? Churchill headed an all-party government, a coalition he assembled in a desperate emergency. His concern was not politics. It was the survival of Britain, liberty, and western civilization.

What’s more, deleting context obfuscates just what these troops were really fighting. In ignoring the identity, nature and goals of what it calls “the enemy,” Dunkirk offers viewers no concept of why Churchill said “we shall never surrender.” Instead we get a kind of politically correct virtual reality, determined to offend no one—or as Noël Coward parodied in more judgmental times, “Don’t Let’s Be Beastly to the Germans.”

Mr. Nolan overlooks the reality that while “the enemy” were brave and fought well, they also stood for something. They fought for what Churchill called “a monstrous tyranny, never surpassed in the dark, lamentable catalogue of human crime.” There is no hint of this to justify the sacrifices made by Dunkirk’s rescuers and rescued. It would be worth offending somebody to convey understanding of a key historical event.

To make matters worse, real-life heroes are determinedly excised. Kenneth Branagh, the great Shakespearean, plays a Royal Navy pier-master, “Commander Bolton.” The actual pier-master was Canadian-born RN Commander James Clouston, who saw more than half the troops off before his motorboat was bombed by the Germans on the last night of the evacuation. Clouston’s son asked the producers to credit his father. Every hero could not be honored, they said.

But no heroes are honored. Some claim Branagh is Captain William Tennant, who heroically supervised on-scene operations—but Tennant isn’t mentioned. We hear the name “Ramsay,” without context. Appointed out of retirement by Churchill, Vice Admiral Sir Bertram Ramsay and his staff worked round the clock for nine days in a Dover bunker, distributing charts, organizing buoys and the flow of shipping. In this film, they go unremarked.

The result of this decontextualized vagueness is that the stage isn’t set for the spectacular footage to follow. We are told briefly that “the enemy” (don’t let’s be beastly) has driven the Allies to the sea. They await their fate in surrounded Dunkirk. “Hoping for salvation. For a miracle.” That’s it. It is an intro equally suitable for a scene in Star Wars.

Reviewers have praised this dramatic cinematography, but there is some questionable emphasis. Soldiers crouch for long minutes in a beached trawler used as target practice by somebody (“the enemy”?). Meanwhile, large ships capsize and sink quickly with the weight of one load of bombs. The aerial dogfight scenes are lengthy, but not substantially better than earlier, lower-tech films on the Battle of Britain or Pearl Harbor.

Additionally, the film seems to rush along toward the end, as if an alarm clock has gone off. For an hour or more we see straggling lines of troops on a beach, endless, empty sands, and a Channel almost devoid of ships. Then, suddenly, a fleet of little boats appears and 338,000 cheering British, French, Canadian and Belgian soldiers (the last two groups not mentioned) miraculously escape.

That said, when the film does reach its end, it is a poignant one – and it at last provides a trace of context. At a south coast port the exhausted, rescued soldiers climb aboard a train, gazing out its windows at passing views of the green and pleasant land that is England, and home.

Knowing what they have gone through, that scene brings a tear even to the most jaded moviegoer. It is an effective device for a soldier to read Churchill’s words from a newspaper: “We must be very careful not to assign to this deliverance the attributes of a victory. Wars are not won by evacuations…. what has happened in France and Belgium is a colossal military disaster…. We shall defend our island, whatever the cost may be.”

But what was the deliverance, and what was the disaster? Mr. Nolan fails to answer these questions – and in so doing, fails to give his viewers a clear picture either of the extent of the disaster or the exhilaration of the deliverance. Dunkirk ended with civilization facing the greatest threat in history—and only one nation, or rather Commonwealth-Empire, in arms against it. It imbued in the British the spirit to fight on, as Churchill told them: “If necessary for years. If necessary alone.” But you wouldn’t know it from this ambiguous, indifferent film.

As a friend says, “This is very much a generational movie. But the generation it aims at is of this century, not the last. Thus the modern artistic emphasis: atonal music, ear-piercing screams and bangs. We miss an opportunity for reflection and understanding.” For those of “a certain age,” Dunkirk has a fuller and deeper meaning. Its presentation here doesn’t pass muster.