The Other Club: Founded by Churchill and F.E. Smith 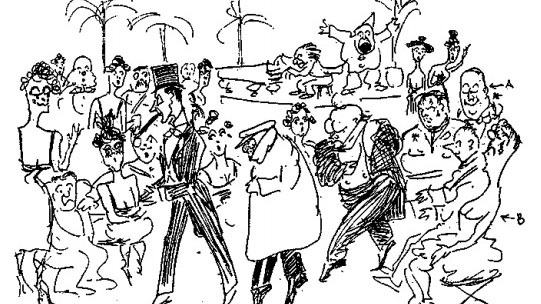 Above: Sketch by a member, 1917: “The Attorney General [Smith], a great Captain [unknown], a risen Minister [Churchill] and two insignificant members of The Other Club leave the Savoy unobserved by the general public. N.B. —> A and —> B are intended to draw attention to the duration of the virgin glance of an insignificant member.”
—From Colin Coote, The Other Club (1971)

The Club and the Other

“Imagine: The Club, exclusive, immemorial, resonant with the noises of gentlemen dining. Imagine, though, two splendid braggadocios, quite thinly disguised under the pseudonyms of Winston Churchill and F.E. Smith. Our heroes suspect the pitter-patter of black balls. So what do they do? They start The Other Club. Here, too, gentlemen may dine, insulated from hoi polloi; and, if the members seem to be mainly of a political or military vocation, then where else would you look for gentlemen except landed, on the grouse-moor?” —Christopher Ford in The Guardian, 13 November 1971

Landed gentlemen who hunted grouse on their moors also enjoyed each other’s company when in London. The gentlemen’s club, members-only and strictly private, was their creation, originally established in the 18th century. One of the most renowned gentlemen’s dining clubs in London was The Club, also known as the Literary Club, founded in 1764 by the artist Joshua Reynolds and the essayist and lexicographer Samuel Johnson.

RULES OF THE OTHER CLUB

These are the original Rules, though some have changed. Rule 3 was immediately and frequently violated. As for Rule 6, the Club was not immune from inflation. Rule 7 had the clear purpose of altering no vote in Parliament. Although Rule 11 remains unchanged, there has been no Executive Committee since 1970 and its powers are exercised by the honorary secretaries. The Rules are read aloud at every meeting and members have long known them by heart. —Sir Colin Coote

In 1911, Winston Churchill, Secretary of State for the Home Department in the Liberal government of H.H. Asquith, and his closest friend, Conservative MP and barrister F.E. Smith (later Lord Birkenhead), desired to join The Club. Legend has it that both were blackballed by The Club, considered too brash and controversial.

Sir Martin Gilbert and the journalist Sir Colin Coote, The Other Club’s sometime secretary and historian, found no documentary evidence of this. Sir Martin thinks the intent was to assuage the vast political divide, which was considerable. Churchill’s 1904 defection to the Liberals had alienated him from the Tories; Smith remained a Tory, and friend of Churchill. Together they asked the Liberal Lloyd George to lend his name to invitations, which they sent to prominent members of both parties. (Later, they also welcomed Labour Party members.)

Like The Club, the object of The Other Club was “to dine.” It was limited to fifty members, only twenty-four being Members of Parliament, in order to recognize MPs of both parties as the club’s most important part, but not its majority. This rule was quickly violated: the original forty members comprised thirty-one MPs. Others included members of the House of Lords and outsiders, called “distinguished members”: soldiers, lawyers, writers, artists, businessmen and journalists.

Another political rival whom Churchill proposed was the Labour Party’s J.H. Thomas, a railwayman turned cabinet minister. Churchill liked him, Colin Coote recorded, even if “he was rather inclined to call mere acquaintances ‘real pals.’” A great character-sketcher, Coote memorably described some others: Lord Tweedsmuir (John Buchan), who “wrote tremendous adventure stories…with the pen of an angel,” and Alfred Munnings, “whose portrayal of horses was divine.” Lord Goddard was “as forthright about hooligans as about port.” But as Christopher Ford noted, Coote was no ignorant tippler himself: In World War I, when he was honorary secretary, the club ran short of brandy. “After considerable research,” Coote wrote, “I discovered an excellent 1875, a passable 1904, and an undated concoction with a kick like a mule. Churchill unhesitatingly chose the mule.”

The Other Club met at the Pinafore Room, Savoy Hotel, on alternate Thursdays at 8:15 punctually, when Parliament was in session. So as not to affect any vote on the floor, opposing MPs were “paired” while the club dined. Twenty-seven members attended the first dinner on 18 May 1911.

On 6 August 1914, The Other Club held its first meeting of World War I. Lord Kitchener was in the chair. Among the distinguished diners were Sir George Allardice Riddell, the newspaper owner, who recorded in his War Diary an event at the end: “Winston rose and said he proposed to disregard the rules of the club, which forbade any toast but that of the King, by proposing ‘Success to the British Army.’ The toast was drunk in silence.”

During the Second World War, The Other Club met regularly. Of its two “pious founders,” Lord Birkenhead had died in 1930, to the great loss of everyone, Churchill in particular. But from May 1940 Churchill was prime minister. He held forth unfailingly, though speeches were not permitted, and cheered his colleagues with his defiance and optimism.

In 1898 a South African diamond magnate, Woolf Joel, a guest at the Savoy, gave a dinner party attended by thirteen guests. The first to leave, Joel laughed off the old superstition that tragedy would fall upon the first diner to rise from a gathering of thirteen. There was shock in London when it was learned that Joel had been fatally shot following his return to Johannesburg. Thereafter, a Savoy staff member would add himself to any group of thirteen, but this led to uneasiness over confidentiality.

The hotel solved the problem by commissioning the architect Basil Ionides to craft a three-foot-high figure of a black cat, an animal associated in English history with good fortune—provided one did not cross your path. Ionides made it from the wood of a London tree, lacquered in black. Named Kaspar, the cat lives to this day on a high shelf with a mirror behind it in the Pinafore Room.

Whenever a party of thirteen dined there, Kaspar would occupy a fourteenth chair with a napkin tied round his neck, and would be served each course, complete with all the wines, cutlery and china offered to other guests.

Churchill, who loved cats, became very fond of Kaspar, and eventually insisted that he join Other Club dinners regardless of the number dining. Alas one night in the early 1940s, Kaspar vanished. According to the Savoy historian, after a dinner for officers of 609 (West Riding) Squadron, RAF, one of the departing diners jokingly placed some empty wine bottles under his tunic, making no attempt to disguise them, while another carried a bag as if it were stuffed with loot. They were challenged by the head waiter, and in the confusion a third guest spirited Kaspar away under his raincoat. The Prime Minister was not pleased. 609’s station workshop hastily cleaned up the somewhat damaged cat, and Kaspar was returned to his place.

Churchill loved The Other Club, particularly after the death of his friend F.E. In good times and bad, he always attended. It had “a strong hold on Winston’s affections,” wrote his doctor Lord Moran. On more than one occasion Moran tried to persuade him that he was not fit to travel to attend a dinner. Invariably “a stormy scene” followed. Most of the time, Churchill won.

Moran, who did not observe all the gentlemanly niceties, asked in the late 1950s to be proposed as a member himself. Although surprised by the request, Churchill felt that he couldn’t hurt the doctor’s feelings by refusing. After Churchill’s death, Moran published his controversial diary, Winston Churchill, The Struggle For Survival. Its discussion of matters normally confidential between doctor and patient so offended Churchill’s Other Club friends that they asked him to resign. “It said a lot about him,” remarked one, “that he saw no reason to do so.”

Robert Arthur James Gascoyne-Cecil, Fifth Marquess of Salisbury—“Bobbety” to friends in The Other Club—described a typical scene from the later years: “In due course Sir Winston would arrive, beaming, benevolent, very pink and white in his dinner jacket ….One might find oneself sitting next to anybody—to Brendan Bracken, or Sir Alfred Munnings, or Lord Keynes—and the conversation flowed very freely.

Dinners were very civilized occasions. One member might belong to one political party and the man next to him another, strongly opposed to it. This seldom led to any serious embarrassment. No subject was barred—least of all politics. Yet in spite of Rule 12 (licensing ‘rancour and asperity,’) the approach smacked of dinner table rather than battlefield. In fact, I have very seldom seen tempers lost, even in discussion on highly controversial subjects.”

Aged 88 in 1962, recovered from a broken hip, Sir Winston announced his return to The Other Club. The Savoy’s chef prepared his favorite dishes: Petite Marmite Savoy; fried fillet of sole wrapped in smoked salmon and garnished with scampi; filet of roast deer stuffed with pâté de foie gras and served with truffle sauce. The last dinner he attended was on 10 December 1964, some six weeks before his death. Fifty years after he and his best friend founded it, Churchill still held The Other Club in esteem. He would be pleased to know that it still dines punctually to this day.