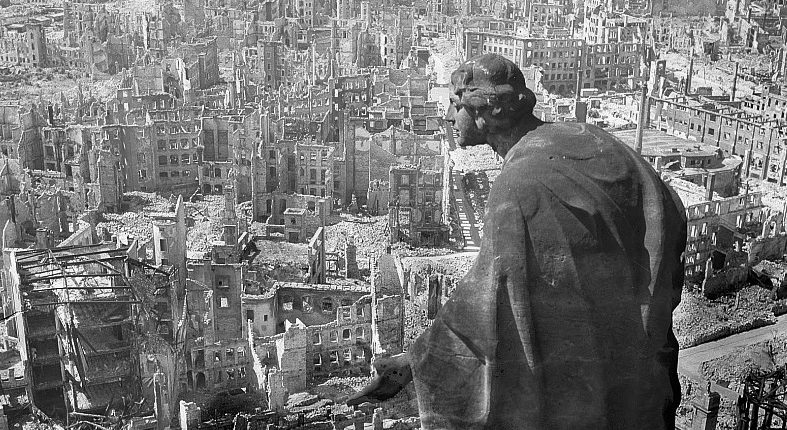 Life is confusion, and confusion is history. It is hard to untangle the events of history, harder still to decipher the motives involved. Stephen Wynn’s new book succeeds at creating a fast-paced account of concrete events. It does not clarify Churchill’s motives and heart with grounded evidence. While lacking depth, it serves as a broad introduction to the more controversial decisions Churchill made, 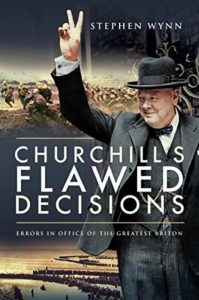 The title proclaims that the book is not a polemic. “Flawed” decisions “have some good in them.” Mr. Wynn is not purely cynical. But his curiously selective consultation of history is, to put it mildly, unsettling. In order to understand a debatable decision, one must consider all angles on the question. Wynn doesn’t often do this.

On 13-15 February 1945, Allied bombers destroyed 1600 acres of the city and killed 25,000 people. Wynn does not wholeheartedly develop or endorse the idea that Churchill should be blamed for the civilian deaths. Instead he presents arguments justifying the bombings. He even asks why “such a strategically important location” hadn’t been bombed sooner. Then he criticizes Churchill for  “the manner in which he conducted himself in the aftermath.”

This analysis reveals myopia, or at least ignorance, concerning crucial sources. Wynn apparently hasn’t read Sir Martin Gilbert. He does not reveal Gilbert’s evidence that the Dresden raid was demanded by the invading Soviets. He appears unaware that Churchill didn’t even know about it when he arrived at Yalta on 4 February 1945. There he was brought up short by Stalin’s first question to him: “Why haven’t you bombed Dresden?” Perplexed, Churchill referred back to Clement Attlee, his Deputy Prime Minister. What’s all this about Dresden? The Soviet request had arrived after Churchill had left for Yalta. In his absence, Attlee approved it. Wynn seems to miss the significance of a memo to the RAF bomber crews before they left. It explained that the raid was in part “to show the Russians when they arrive what Bomber Command can do.”

Wynn correctly reports that “uncomfortable questions” arose immediately after Dresden was leveled. Then he finds Churchill inconsistent: “Winston Churchill, who had instigated the raids, suddenly started to try and distance himself from the bad press that the raids had brought to him and his government.” Wynn quotes Churchill’s famous memo that the raid was “a serious query against the conduct of Allied bombing.” He implies hypocrisy: “The idea for the attack on Dresden was his plan to start with…”

So many non-facts and incomplete chronology deserve serious examination. Here is the reality. Churchill sanctioned what he called “the hideous process of bombing open cities from the air” for four reasons. 1) The Germans began it, over Warsaw and Rotterdam. 2) The British people demanded it after they were themselves bombed. There was no “bad press” in 1945. 3) Britain’s military chiefs considered it the best way to strike at Germany. 4) For a long time it was the only substitute for the “Second Front” the Russians demanded. 5) Nevertheless, Churchill challenged the indiscriminate bombing of civilians, and Dresden in particular. Of the three allied leaders, he was the only one who did.

Wynn does not engage in polemics when he recounts the infamous accusation that Churchill played God with Coventry. (Allegedly, Churchill didn’t warn Coventry of the bombing, fearing to reveal that the British had cracked German codes.) Wynn has discovered only two sources which make this claim (actually there were more). One of them, he says, is untrustworthy. He spends a chapter considering this false charge, rather undermining his book title. Churchill did not let Coventry burn. Indeed he called for its air defense—which was sadly insufficient. Why then is Coventry a “flawed decision”?

The author tends to list all the criticisms of Churchill while avoiding a unified evaluation. Readers of these contrary criticisms may simply conclude that each issue was a tough decision either way, without learning the truth. On the Tonypandy miners strike in 1911, we get a very long-winded backgrounder. Then in mid-chapter Wynn recounts criticisms from both sides of the controversy. Churchill “turned down the initial request for troops as he felt that the local authorities were overreacting…. But I don’t believe this was out of any concern for the well-being of the miners and their families, it was simply because, by trying to prevent matters from escalating….” It isn’t a question of what one believes, but of the facts.

Has our author read the appropriate sources? Has he read Churchill’s message to the miners: “Their best friends here are greatly distressed at the trouble which has broken out and will do their best to help them get fair treatment.” Has he researched the liberal Manchester Guardian? (“The brave course was also the wise one. One can imagine what would have happened if the soldiers instead of the policemen had come on the rioters…”)

He does not mention the strike in Llanwellli, 1911, where troops actually were used. Nor has he noticed the comment of long-surviving strike leader, Will Mainwaring. “We never thought that Winston Churchill had exceeded his natural responsibility as Home Secretary. The military that came into the area did not commit one single act that allows the slightest resentment by the strikers. On the contrary, we regarded the military as having come in the form of friends to modify the otherwise ruthless attitude of the police forces.” Where is the research?

On the fall of Singapore to the Japanese in February 1942, Wynn follows the pattern of contradiction without analysis. He challenges Churchill’s orders: “After having failed [adequately to] train and equip the military personnel who had been sent to protect the Crown Colony, he expected them to fight to the death.” A few paragraphs later: “It strikes me that there was a lack of leaders who were prepared to stand and fight.” It strikes the reader with confusion. If Churchill should not have told them to fight on, why were they at fault for not fighting?

Churchill was never responsible for training and equipment, though he was indeed culpable on overrating Singapore’s defenses. But contrary to Wynn, he did not insist on a fight-to-the-death. On 14 February he telegrammed authority to surrender “when no further result can be gained.” Where is the research?

The deeper claim is that Churchill should have better equipped Singapore’s garrison. (See Christopher M. Bell, “Churchill and the Guns of Singapore, 1941-42.”) Perhaps this is true, but Wynn does not show an appreciation for the difficulties of such decision-making. Instead, he approaches the question with moralizing hindsight: “Why Churchill didn’t see fit to provide the defenders of Singapore with sufficient aircraft, or why there were no tanks on the island has never been fully explained.”

It has been explained. See Gilbert. “This is particularly poignant,” Wynn adds, since “at the same time Churchill was happily sending a large number of tanks to Russia to help Stalin in their fight against Germany.” Not if one considers matters as they were at the time.

Need does not determine priority

Wynn’s mention of Russia actually answers his own question. War is not a progression of logical decisions. Every choice is based on urgency, incomplete information and insufficient resources. The greatest of statesmen still face agonizing choices. Wynn does see the allocation of forces as a difficult problem of prudence and prioritization. He does not allow that Churchill might have considered Germany a more urgent threat than Japan. He seems to see Singapore as more worthy than the European war, and thus deserving of more military support. Such thinking would have been immoral to follow in practice, since it risks victory and peace.

The fall of Singapore may show flaws in Churchill’s strategic prioritization. Even so, the choice was a tough matter of prudence. Need does not determine priority.

Similar to his analysis of Singapore, Wynn judges the Bengal Famine of 1943 by the dreadful outcome. The fact that millions died is tragic. This of itself does not itself show heartlessness in Churchill. Wynn seems to regret, and to rail against stockpiles of food in the UK, which was also facing shortages. He does not consider the risks to precious war-time shipping involved in transporting food past enemy submarines. Churchill’s efforts were more limited by the war effort than we are allowed to see here. They were also far more extensive than Wynn presents, including arranging for Australia to send wheat to India instead of Britain. (See Arthur Herman, “Absent Churchill, Bengal’s Famine Would Have Been Worse.”)

The most famous military debacle of Churchill’s career was the disastrous attempt to force the Dardanelles in the First World War. Again Wynn judges outcomes divorced from decision-making. Half the chapter reviews the Dardanelles Commission report, which blamed several military leaders, particularly in the army—but never Churchill. Nevertheless, Wynn treats Churchill as responsible for the entire operation, and holds him guilty for all the mistakes.

Of course it is correct to place the blame partly on Churchill (though he did not direct the Gallipoli landings). The faults are subtler, though, than Wynn makes them out to be. Churchill had the energy to push the plan through the war councils, but not the authority to oversee its execution. He thus opened the door for incompetence or recalcitrance by others. His own evaluation is as valid as any: “A supreme enterprise was cast away, through my trying to carry out a major and cardinal operation of war from a subordinate position.”

Churchill’s Flawed Decisions is flawed with easy moralizing, insufficient exposure to the sources, and personal opinion based more on impressions than facts. War is a twisted business. Time is limited, and bad consequences for decisions do not indicate a heart of vice. Despite its overblown criticism of Churchill, this book is not really a hit-piece. Wynn sees himself as portraying the bad side of a great man, to whom he feels indebted to for freedom. Wynn takes a human view of Churchill, and so he can write a book on the “flawed decisions” of the “Greatest Briton.”

Singapore: Christopher M. Bell, “Churchill and the Guns of Singapore, 1941-42.