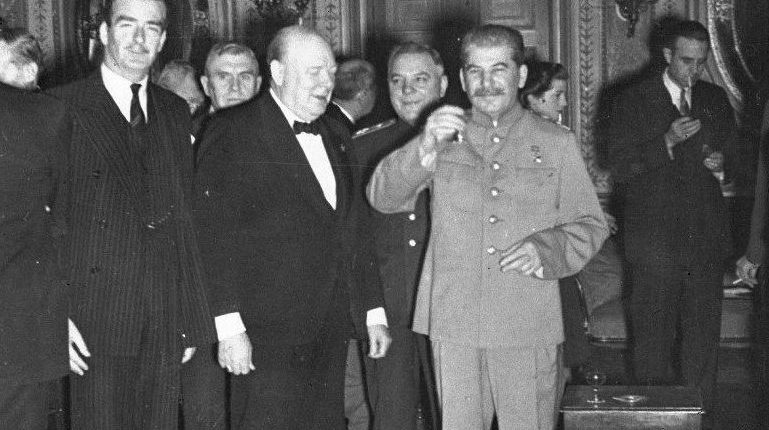 A toast at Teheran: “The only thing worse than fighting with allies,” Churchill said on several occasions, “is fighting without them.” L-R Anthony Eden, WSC, Marshal Voroshilov, Stalin; right rear, Averell Harriman.

Books on Churchill in his most memorable years are now so numerous that a new one requires a unique approach. Allen Packwood, Director of the Churchill Archives Centre, provides insights to Churchill’s leadership, and “the mindset, constraints and challenges within which he was working.”

Churchill’s decision-making is considered in ten areas, personal and political. Packwood explains why he made himself Minister of Defence, how he worked with Stalin and Roosevelt, his view of FDR’s “Unconditional Surrender” policy, how prepared for D-Day, and why he so aggressively fought the 1945 election. Political questions involve Churchill’s reaction to the Fall of France and Singapore, the Middle East war including sacking of its commanders, and the postwar fate of Greece and Poland. Most of those decisions were crucial to the war’s outcome.

In the First World War, Churchill believed that the Dardanelles enterprise failed because he tried to orchestrate it from a subordinate position. So his first major decision when he became Prime Minister was to appoint himself Minister of Defence. This gave him plenary military authority, but as Packwood illustrates, his early political position was weak. Fortunately, and maybe surprisingly, his predecessor supported him. Neville Chamberlain’s backing was crucial in Churchill’s dispute with his Foreign Minister, Lord Halifax, who wished to respond to peace overtures from Hitler. 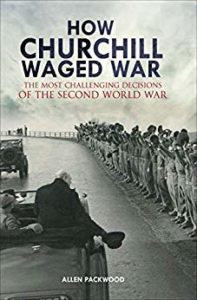 The Fall of France was another key challenge. Once France was defeated, Churchill was determined that her powerful navy would not be used by Germany. When the French refused to sail to neutral ports or scuttle their ships Churchill courageously attacked and destroyed key parts of the French navy. Though the narrative is well known, Packwood focuses on views of the First Sea Lord, Dudley Pound, and on-scene commanders, that the action was unnecessary and dishonourable. In Churchill’s defense, Packwood does mention that after the attack he was “cheered to the rafters” in the House of Commons, which cemented his leadership. It would have been pertinent, however, to include the reaction of President Franklin Roosevelt. Churchill’s action convinced him of Britain’s determination to fight on, justifying further United States assistance. Another factor omitted was the reaction of the Free French leader General de Gaulle. “I considered that the saving of France ranked above everything,” de Gaulle wrote, “even above the fate of her ships.”

Churchill’s every instinct was to take the offensive. Packwood illustrates his frustration, early on, at having to play defence. The stark danger in those months was the very real possibility of invasion by Germany. But Churchill made many changes in military and civilian personnel to form a team of offense-minded individuals. In public and in speeches and broadcasts, he remained resolute and defiant.

For years of course, a direct land operation against Germany was impractical. Accordingly, Churchill targeted the Middle East. His object was to deny Germany the oil resources of Iran and Iraq, and access to the Suez Canal. Packwood notes that in August 1940 Churchill enthusiastically backed a plan to send half of Britain’s tanks to Egypt. He did this despite German forces poised across the English Channel, when Hitler’s “Operation Sea Lion” was still expected. “The loss of Egypt and the Middle East would be a disaster of the first magnitude,” Churchill argued, “second only to successful invasion and final conquest.” Despite Britain’s desperate situation, he remained conscious of the need to defend the Middle East.

Packwood’s chapter, “The Devil or the Deep Blue Sea,” covers Churchill’s attitude to the two major powers not initially in the war. The PM began warning Stalin of Hitler’s intentions to invade Russia in April 1941. The Soviet leader ignored him. When the invasion did come, Churchill, long a vehement anti-communist, proclaimed that the destruction of Hitler made the decision simple. He promised Russia whatever help Britain could deliver. Stalin, far from appreciative, reacted by demanding an immediate second front in the West, meaning Northern France. Stalin never wavered in that demand until D-Day in 1944.

Churchill was encouraged in September 1939 when, though he was not yet prime minister, President Roosevelt opened a private channel of communication with him. But as prime minister, Packwood notes, it was frustrating when Churchill’s “initial appeals to Roosevelt seemed to fall on deaf ears.” Later, the “destroyers for bases agreement” followed by “Lend-Lease” were significant, and Churchill welcomed Roosevelt’s invitation to meet with him in Newfoundland in August 1941. Their meeting and the resultant Atlantic Charter were hopeful events. But Churchill was disappointed that the U.S. showed no signs of joining Britain as a belligerent. Nevertheless, Packwood writes, the personal empathy between the two leaders was important factor when the U.S. did enter the war. The result was the “Special Relationship” Churchill had so long hoped for.

Packwood considers Churchill’s management style in his chapter, “Leadership or Interference.” He criticizes Churchill’s impatience over the command in North Africa—the successive sacking of General Wavell in June 1941, and General Auchinleck in February 1942. Packwood notes that “The Auk” was a careful commander, not to be pushed into precipitate action—a quality that did not endear him. When he told Churchill he could not take the offensive until September 1942, that was the final straw. Churchill replaced him with Harold Alexander and theatre commander Bernard Montgomery. Rather ironically, the new commanders also refused to be browbeaten into premature attacks. The successful Second Battle of Alamein was not begun until November 1942.

During the Casablanca Conference on 24 June 1943, Roosevelt (to Churchill’s admitted surprise) announced the policy of “Unconditional Surrender” by Germany. Packwood is equivocal on Churchill’s opinion of this. He says Churchill played “a central role” in [the policy’s] birth, if not in its proclamation,” and that “It is difficult to see how in itself it significantly prolonged the war.” He also offers evidence to the contrary. He lengthily quotes Lord Hankey and Labour MP Richard Stokes that “Unconditional Surrender would “stiffen German resolve”; and Stalin, who thought it “bad tactics.” Stalin, who was never consulted about the policy, said at Teheran that the three allies should work out surrender terms jointly. Packwood says Churchill at one point though “this is a better suggestion.” Roosevelt demurred, referring to his own statement that “The United Nations have no intention to enslave the German people.” The “Unconditional Surrender” policy remained in place. Packwood adds that it was “a gift for German propaganda, but the terms of any conditional surrender were likely to be dictated from Moscow.” All this may suggest why the policy remains controversial among historians.

In the build up to D-Day, the 2017 film, “Churchill” starring Brian Cox, blatantly showed the Prime Minister as opposed to the Normandy landings. Packwood correctly explains that Churchill’s reluctance came much earlier. He did not wish the operation to be undertaken until criteria for success had been fulfilled. Thus he demanded meticulous planning and training.

Chapter 9 deals with two contrasting outcomes of the war in Europe. Poland, over which Britain had declared war in 1939, was occupied by Soviet troops in 1944-45. Stalin had no intention of allowing a free vote to determine Poland’s future. Greece, however, had a happier fate. In the infamous “percentages agreement” of 1944, Stalin and Churchill agreed Britain would have 90% influence in Greece. Stalin did keep that agreement; when Churchill flew to Athens at Christmas 1944 to negotiate an interim government that led to a democratic Greece, Stalin did not interfere.

Allen Packwood offers a most interesting analysis of Churchill’s war leadership and personality. The Prime Minister, he shows, was at his best in a crisis, and at his worst when inactive. At the beginning of the war he was reacting to events, but also shaping and influencing them. Later on, war leadership passed to the United States and the Soviet Union, with Britain very much the junior partner. And Packwood quotes Churchill’s analogy to “the poor little English donkey, who was the only one, the only one of the three, who knew the right way home.”

The objective of the book is to illustrate how Churchill approached wartime challenges, not to assess the results of his decisions. Therefore the book is best for those who already have an  understanding of the wartime events. Readers with a more rudimentary knowledge might expect “the rest of the story.”