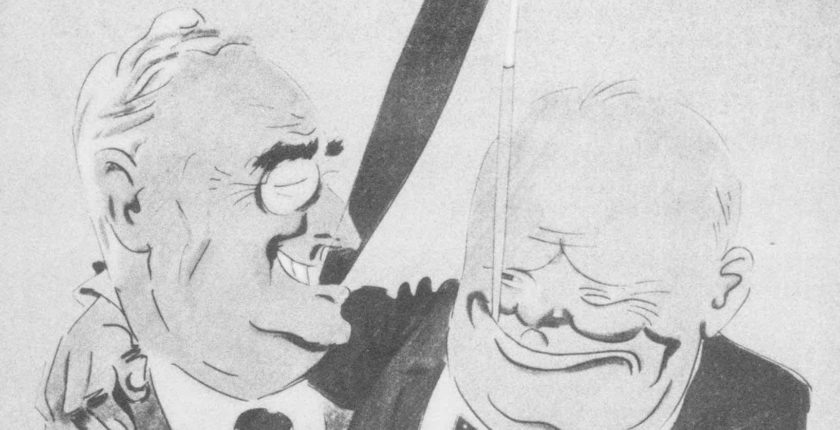 Above: “Just Perfect Harmony” (John Webster in the Wisconsin Courier, 1943). A somewhat optimistic portrait of the Roosevelt-Churchill friendship.

John von Heyking notes that there are many statues of a solitary Churchill, but only one with President Roosevelt. The cover of his book pictures that sculpture, a famous work by Lawrence Holofcener, on Bond Street in London. Yet the friendship and conversation implied by that one statue were central to Churchill’s approach to politics and statesmanship.

Von Heyking is a professor of Political Science at the University of Lethbridge. He is the author of The Form of Politics: Aristotle and Plato on Friendship. Here he considers the manner in which friendship is a central category for politics.” This, he writes, was a key part of Churchill’s statecraft. 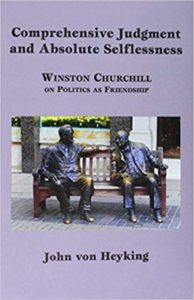 and 2 the von Heyking considers Churchill’s great friendship with F.E. Smith, Lord Birkenhead, and their 1911 co-founding of The Other Club “as a place to practice friendship above and beyond politics.”(10) Von Heyking believes the Club represented “an attempt to cultivate a kind of friendship understood in the Aristotelian sense as a moral practice that transcends politics.” Other writers, however, have attributed a political purpose to The Other Club, as opposed to von Heyking’s argument that it served to reinforce political friendships. Andrew Roberts in Churchill: Walking with Destiny (150-51) writes that the club was intended to promote cross-party cooperation with the ultimate goal of a Liberal-Conservative coalition government. Later, when this initial ambition was passé, the Club became more a reflection of Churchill and Smith’s personal friendships.

Von Heyking notes the importance of conversation and face to face meetings in Churchill’s practice of politics. For, Churchill, he says, getting to know a person “was the work of politics.” Thus, conversation was not an escape from politics but “its very form.”

Chapters 4 and 5 take up Churchill’s friendship with Franklin Roosevelt. Among other biographers, Roy Jenkins’ Churchill questioned whether the president and prime minister were really friends. Von Heyking believes that there were bonds of friendship, and they “genuinely loved each other.” Their relationship, however, “must be understood within the context of the tough game of statesmanship that each great-souled man played.” They were friends while also each leading independent nations, each with its own national interests.

Churchill and Roosevelt managed to represent their different national interests while enjoying “a productive working relationship.” The British Prime Minister sought a friendship with the President in order to prosecute a war. Similarly, von Heyking’s readers might conclude that in this Churchill did not choose Roosevelt as a friend; rather, FDR was chosen for him, by American voters in the 1940 presidential election. Had Wendell Willkie won that election, Churchill would have no doubt sought a friendship with him. Then Jon Meacham would probably have written Wendell and Winston: An Intimate Portrait of an Epic Friendship in place of his well-known Franklin and Winston.

Von Heyking’s sixth chapter discusses Churchill’s belief that personal and political friendships play a critical role in a parliamentary democracy. Churchill’s close relationships with fellow parliamentarians were “crucial” in his becoming prime minister in 1940 and in leading the wartime coalition. Von Heyking is careful to note that “this is not to say that Churchill was never tough, manipulative, or Machiavellian with political allies and rivals.” He could have expanded on this point by describing examples of Churchill choosing political advantage over friendship.

Examples include the endless stringing along of Anthony Eden as his chosen successor during the 1951-55 premiership despite their friendship (and even relation by marriage). Another was the casting aside of Robert Boothby in October 1940 following a financial scandal. Churchill expended no political capital to save Boothby, and accepted his resignation from ministerial office. Yet he called Boothby “one of my personal friends” and admitted to “a warm personal regard.”

Close friendships and politics are perhaps always a paradox. Of course it can also be argued that Churchill’s fixed political ethics were such as to make defending Boothby impossible.

In chapters 7 and 8 von Heyking considers Churchill’s view of Britain’s “island story” as an expression of “civic friendship.” The British from generation to generation strove for the common cause of finding and securing liberty. But Churchill’s devotion to parliamentary democracy is in “some tension” with his devotion to the empire, since “empire entails rule over others.”

The next two chapters study Churchill’s multi-volume biography of his great ancestor John Churchill, First Duke of Marlborough. Like many scholars, Von Heyking believes writing Marlborough was Churchill’s final education in statesmanship before World War II. Among the many lessons Churchill drew from his writing, during the “gathering storm” of the 1930s, was that the “nature of politics and statesmanship was friendship.” Marlborough had the capacity to form friendships, in Churchill’s mind, unlike such contemporaries as King William III. The Duke’s most significant was with Prince Eugene of Savoy, a relationship which foreshadowed Churchill’s with Roosevelt. Both friendships united independent nations in a war against a continental despot.

Comprehensive Judgment and Absolute Selflessness is well worth the reading. It is an interesting scholarly work that places Churchill’s practice of friendship within a philosophical grounding.