The Churchill Project - Hillsdale College > Articles > Q & A > Churchill's Character > Questions and Answers: How Churchill Would See Our World

Questions and Answers: How Churchill Would See Our World 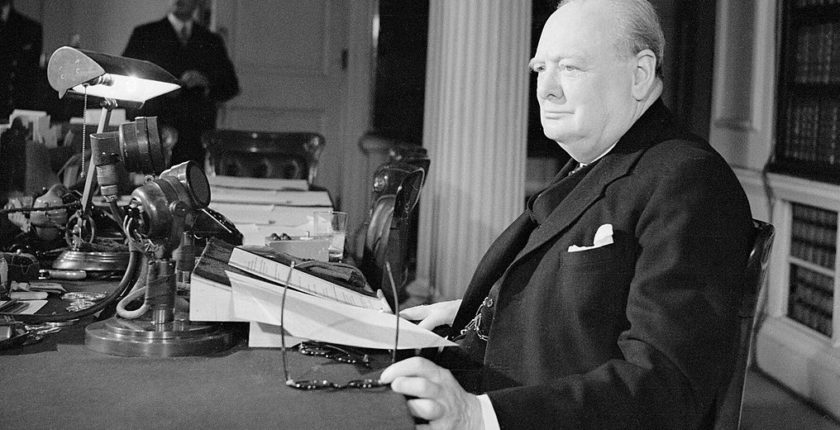 On May 10th, the Chartwell Society of Portland toasted the 81st anniversary of Winston Churchill becoming Prime Minister. My virtual presentation was entitled, “Current Contentions: the Deconstruction of Sir Winston.” The text with endnotes will appear this year in a new publication by the Hillsdale College Churchill Project. Meanwhile, readers might be interested in the questions and answers session. Indeed this might prompt questions or comments of your own. We will be glad to publish your reflections, which may be emailed to [email protected].

Former U.S. Senator Bob Packwood had the first questions: “Everybody asks me what Churchill’s position would be today on the Middle East. It appears that he wanted to do right by everybody—guarantee the Jews a Homeland but respect the rights of the Arabs. If that view of his is correct would he be closer to pro-Zionist today or support the PLO?  Did Churchill personally support the United Nations partition of Palestine in the 1940s?

Churchill was the eternal optimist. He actually believed, in 1921, that Jews and Arabs could coexist for mutual benefit. (As indeed do the Jewish and Arab citizens of Israel.) That’s why he spoke then of a Jewish homeland, but not a Jewish state. But he did become resigned to the partition, and later the state.1 Speaking to Palestinian Arabs he said:

Faced with impossibilities, as we have been with the PLO, he always looked for ways to go around the problem—thus the Dardanelles to bypass the western front in the First World War. But he didn’t support thugs, unless the alternative was a worse thug. So I think he would try to go around the PLO by sponsoring Arab treaties of and peace with Israel. It is ironic that two U.S. presidents who probably don’t agree on anything else did this successfully: Jimmy Carter in 1978, Donald Trump in 2019.

The London statue 100 years on

From Andrew Roberts (who needs no further introduction): Do you think the statue of Winston Churchill will be standing in Parliament Square in 100 years’ time?

Trust Andrew to toss trick questions into the works! I don’t even know if Parliament will be standing in 100 years’ time. After all, Orwell made London the capital of Oceania in 1984, didn’t he? Orwell’s hero was “Winston Smith” (we know where he got that name). Smith’s job was constantly to rewrite history to suit the party line. Everything proscribed by Big Brother was put into something called the Memory Hole, and never heard of again. Statues too, I suppose. The best we can hope for is what Churchill said in 1954:

For myself I am an optimist—it does not seem to be much use being anything else—and I cannot believe that the human race will not find its way through the problems that confront it, although they are separated by a measureless gulf from any they have known before….3

If he proves right, Parliament and the statue will endure.

Reading Britain At Bay, by Alan Allport, I was struck by just how much hung in the balance early in the war. What personality traits did Churchill possess that made him able to rally a nation and lead so effectively? How were they shaped during his life and how did he draw on them? How do those traits contrast with those of Mr. Chamberlain, whom Allport characterizes as vain, boring, spiteful, friendless, and lacking intellectual curiosity?

We have to remember that Chamberlain and many appeasers, like Stanley Baldwin, started as businessmen. They had no experience of war, except that it interfered with business. Andrew Roberts makes this point. Also, few leading appeasers—Chamberlain, Baldwin, Sam Hoare, Horace Wilson—fought in the First World War. (Halifax, who fought with distinction, was the chief exception.) Yet all the leading advocates for defying Hitler were veterans—Churchill, Eden, Macmillan, Louis Spears, Roger Keyes, Alfred Duff Cooper.

Ask yourself why that was. I think those who had fought knew what war would be like. So they wanted to stop Hitler before it came to that. The appeasers thought they could make deals with him, like any other businessman.

When war did come, it required someone with will and courage to see it through. Churchill had those qualities. Even Baldwin knew it. I’ll accommodate Hitler, he thought, or pit him against the Russians. Baldwin had no place for Churchill in his 1930s cabinet. But he also said—and this is a direct quote: “Anything [Winston] undertakes he puts his heart and soul into. If there is going to be war—and no one can say that there is not —we must keep him fresh to be our war Prime Minister.”4 That was the difference between them.

Why did Churchill and his Conservative Party lose the general election and, thus, control of the government, in 1945?

This is among the most frequent questions. Churchill himself didn’t lose. He was reelected by a wider margin than in 1935. His party lost because their history was the war, and the Depression before that—and because the Labour Party seemed to promise a brave new world. But after ten years the Conservatives were deeply unpopular.

There’s a funny cartoon showing Churchill before the election, holding the leash to an enormous beagle wearing a top hat, with his tongue hanging out, labeled “Tory Party.” The caption says, “Love me, love my dog.” The voters didn’t love the dog.

That presumes the masters of the Gulag will permit any Churchill books!

This has as many answers as questions, but here’s a try. Among his own books, first read My Early Life. Sure it’s full of inaccuracies and special pleading. But it’s a wonderful read, full of insight into his development.

Then read Marlborough, his greatest biography. In the 1960s it was abridged by Henry Steele Commager, who ruined it. He took out the politics and left only the military. Who cares who won the Battle of Ramillies? In the original you can read all of Churchill’s political philosophy, and see the great war speeches aborning. The scholar Leo Strauss called it “the greatest historical work written in our century, an inexhaustible mine of political wisdom and understanding, which should be required reading for every student of political science.”

Third, The Second World War. Again, it’s biased and one-sided, but as he said, “this not history, this is my case.” More important, Churchill describes the war that made us what we are today. So it’s more important than The World Crisis, although The World Crisis is better written.

About Churchill: I mentioned Andrew Roberts’ Walking with Destiny. Next the Official Biography, because you get to take 31 volumes—you’ll never run out. Third, Mary Soames’s Speaking for Themselves: The Personal Letters of Winston and Clementine Churchill. This book, expertly edited, tells us what they were really thinking—a true revelation of their persona.

What would Churchill do?

What would Churchill do/have done about North Korea’s escalating development of nuclear bombs and missiles, which continues as unabated under the present U.S. administration, as it did under the previous one?

Such questions raise the Mary Soames Commandment: “Thou shalt not say what Papa would do about any modern situation. After all, how do you know?”

History doesn’t repeat, Mark Twain said, but it sometimes rhymes. I think we can get an idea from Churchill, but not a pat answer. It would matter to him if the threat to his country was existential. For example, in 1940 the French fleet posed an existential threat, and he didn’t hesitate to take it out. But the French fleet was not a nuclear arsenal, and France was already defeated. It was not the same situation.

What would Churchill say about Cancel Culture and Big Tech censorship?

I don’t know, the questions are many, but  much on our website about Cancel Culture is based on his thought. We can learn from it. See for example our Truths and Heresies section.

For instance, in 1933, he spoke about much the same impulses in British life:

The worst difficulties from which we suffer do not come from without. They come from within…. They come from a peculiar type of brainy people always found in our country, who, if they add something to its culture, take much from its strength. Our difficulties come from the mood of unwarrantable self-abasement into which we have been cast by a powerful section of our own intellectuals. They come from the acceptance of defeatist doctrines by a large proportion of our politicians.… Nothing can save England if she will not save herself. If we lose faith in ourselves, in our capacity to guide and govern, if we lose our will to live, then indeed our story is told.5

As to censorship, he would say what he said in 1952: “Free speech carries with it the evil of all foolish, unpleasant and venomous things that are said; but on the whole we would rather lump them than do away with it.”6

Of course he never met up with social media. Umberto Eco said: “Social media gives legions of idiots the right to speak when they once only spoke at a bar after a glass of wine, without harming the community … but now they have the same right to speak as a Nobel Prize winner. It’s the invasion of the idiots.” Churchill might agree. But he would not censor anybody.

I take refuge in the Mary Soames Commandment. We cannot say what Papa would do today. We can guess—keeping his principles in mind. He was a great proponent of coalitions, domestic and international. He would want to bring the forces of liberty together on such threats. That suggests what he preached in the 1930s: collective security. Today we have NATO, which he praised. (Do we still have NATO? I think so.) That would be the place for inspired diplomacy on our part. Or maybe President Macron’s.

Is there a Churchill available today? Perhaps in view of your admiration for President Macron?

It’s a partial admiration, because I don’t admire much of his politics. I do admire his courage and principle over the statues issue. He simply declared that no statue in France would be razed, no street or building renamed, because they are part of French culture for better or worse. How do we expect to understand our history without them? And miraculously, the threats against them dissipated. M. Macron was adopting Mark Steyn’s precept: Unless you are prepared to surrender everything, surrender nothing.

Such questions are unanswerable. I don’t think M. Macron is another Churchill. I don’t see anyone out there who is, really. Do you? Remember too that Churchills usually come along when the chips are down. The chips are not quite down, although they seem to be getting there.

Your further thoughts and questions are welcome. Please direct them to [email protected].

1 On these questions see also Ronald I. Cohen, “Churchill, the Jews and Israel,” Part 1 and Part 2, Hillsdale College Churchill Project: 2016.