The Churchill Project - Hillsdale College > Articles > Books > 2020 > The Terror and Splendor of the Blitz, finely related by Erik Larson

The Terror and Splendor of the Blitz, finely related by Erik Larson 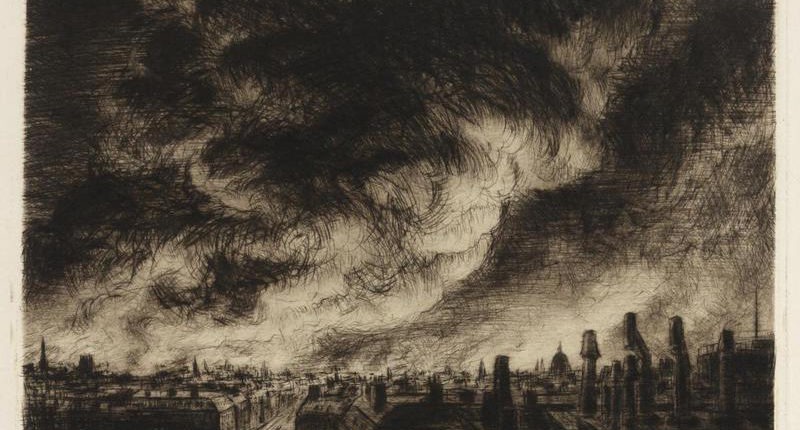 Sketch of a view across the rooftops of central London during the Blitz. The sky is completely dominated by an enormous cloud of smoke, with parts of the city on fire. (Joseph Gray, Imperial War Museum)

Sketch of a view across the rooftops of central London during the Blitz. The sky is completely dominated by an enormous cloud of smoke, with parts of the city on fire. Joseph Gray, Imperial War Museum

The popular historian Erik Larson has done it again. The hugely best-selling author of Dead Wake: The Last Crossing of the Lusitania; In the Garden of Beasts: Love, Terror, and an American Family in Hitler’s Berlin; and Isaac’s Storm: A Man, a Time, and the Deadliest Hurricane in History has once more captured an epochal historical moment and brought it vividly to life in near-novelistic prose, yet without inventing a single thing. Dry-as-dust historians, often in the Academy, have a great deal to learn from writers such as Larson. They introduce the public to the splendor and terror of the past without compromising one iota on fact.

The Splendid and the Vile is the story of the London Blitz, from the moment that Winston Churchill became prime minister on 10 May 1940, until the Luftwaffe raid that destroyed the parts of the House of Commons exactly one year later, coincidentally on the same night that Rudolf Hess flew to Scotland.

A Year in the Life 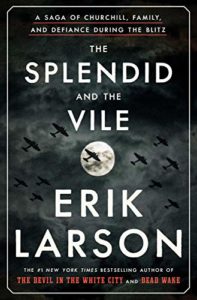 Although Churchill’s family were all brave, this is no hagiography. We are told that Churchill’s son Randolph missed the birth of his son by his wife, Pamela, for example, because he was “in bed with the wife of an Austrian tenor, whose monocled image appeared on cigarette trading cards.” Pamela, understandably, was soon sleeping with Roosevelt’s tall, rich, and impossibly handsome envoy, Averell Harriman. (A female reporter told his daughter: “For g. sake tell your father next time I have to cover his conference to wear a gas mask so’s I can concentrate on what he’s saying.”)

Larson makes excellent use of the diary of Mary Soames, Churchill’s delightful daughter, which resides at the Churchill Archives Centre. Thus there is new information in this book. His work in the British National Archives has been acute and painstaking, too. Despite writing books on World War II for thirty years I learned a good deal. For instance, only four percent of Londoners used the subways as air-raid shelters. And cooperative German POWs were taken around the Blitzed areas to see how high British morale still was.

“Prisoners saw for themselves that London was not lying in ruins as they had been led to believe,” stated one intelligence report. The process made the POWs more cooperative. In late 1942, a captured Luftwaffe officer told interrogators that if German intelligence reports were accurate, the R.A.F. and Allied Forces must by now have “minus 500 aircraft.”

Larson does fine work in countering many revisionist myths about Churchill. Take for example the libel that he knew about the raid on Coventry in November 1940 but deliberately did nothing to warn the city in order to protect the Ultra decrypting operation. He similarly dismisses the various conspiracy theories about the Hess flight. For however zippy is Mr. Larson’s prose—there are 101 chapters in 546 pages—facts are sacrosanct to him.

Nor does this book shy away from the vile side of the Blitz: the looting and the thieving; the occasional, but thankfully isolated, outbreaks of people’s depression and defeatism; the extremely basic lavatory facilities in the subway bomb shelters; and so on. He also focuses on the parts played in London’s destruction by the vile Joseph Goebbels and Hermann Göring. Goebbels sent out radio messages intended to make people fear there was a large Fascist fifth column helping the Luftwaffe. He hoped Londoners hunched around their radios would suspiciously ask one another: “Why did that news reader just say ‘porridge’ for the sixth time?”

There are plenty of humorous moments in this book, too. In September 1940, King George VI and his private secretary, Alec Hardinge, were almost killed in the bombing of Buckingham Palace. “The whole thing happened in a matter of seconds,” the King wrote of the blast only a few yards away. “We all wondered why we weren’t dead.” Yet the police constable guarding the palace viewed it remarkably objectively. He told the Queen that it had been “a magnificent piece of bombing.”

The personality that looms over the whole book is that of Churchill himself. The PM was taking life-or-death decisions on virtually a daily basis. Early on he was forced to decide whether to evacuate the British Expeditionary Force from Dunkirk. Whether to plunge more RAF aircraft into France, or retain them for the far more important Battle of Britain. Later he faced equally tough choices about how to counter the daily-expected invasion. What emerges powerfully is that with him in charge, London would have been defended street by street, house by house, brick by brick. As Churchill said, the capital could have “swallowed” an entire German army, just as Stalingrad later did.

As I read this book, I kept wondering what the swelling of powerful emotion was that I felt, sometimes in an almost physical sense. (I’m a naturally undemonstrative Englishman, rarely moved by words on a page.) Then I realized that, as a Londoner, it was a feeling of overwhelming pride. My poor, brave, battered old city stood up to the very worst that Hitler could throw at it for months. Still somehow it kept its dignity, cheerfulness, and iron resolve not to surrender.

The Russians invented the excellent idea of dubbing as “hero cities” some of their metropolises, such as Leningrad and Stalingrad, that fought the Germans to the knife during the war. Paris retained its beauty by deciding not to go down that route. Instead it declared itself an “open city” to the Germans, retaining the historical architecture and boulevards that we love today.

Larson expertly describes how, by total contrast, the Heinkel and Dornier bombers flattened whole districts of London. Night after terrifying night for months on end, they killed tens of thousands of Britons. Thus London lost much of its ancient built heritage. There are still ugly scars and gouges on some of our public buildings from that terrible time. For all that Paris is far more gorgeous and elegant, I prefer my hero city.

Andrew Roberts’ biography, Churchill: Walking with Destiny. This is the only work meriting two book reviews on this website. See Larry P. Arnn, “Man of the Century” and Richard M. Langworth, “The New Churchilliad.” This review was first published by Airmail and is republished here by kind permission of the author and publisher.