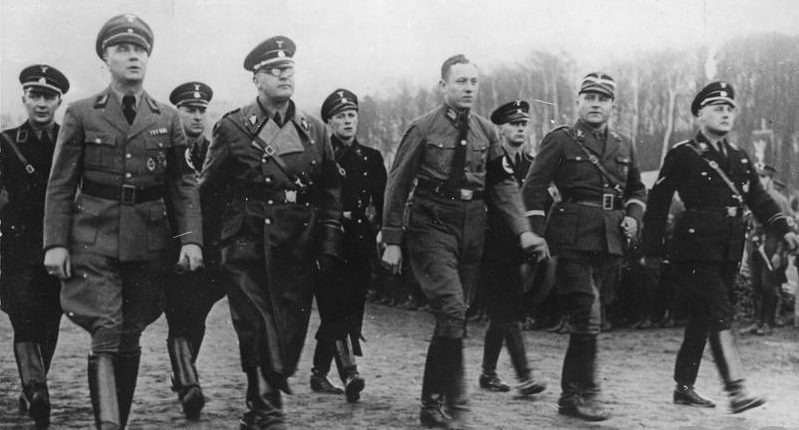 A reader responded to our post about an alleged Churchill quotation on “Fascists of the Future.” He cites a Spartacus Educational article, “Was Winston Churchill a Supporter or an Opponent of Fascism?” Citing Churchill’s words to the Danzig Nazi Albrecht Forster, it argues that WSC supported appeasement and approved of Fascism.

While this is a well-written critique, it tends to magnify specifics to justify generalities. It does not establish Churchill’s attachment to Fascism and Appeasement (although he approved of some forms of the latter). It does instruct us on the kinds of fascists Churchill dealt with in the 1920s and 1930s.

The Forster reference is used to argue that Churchill favored appeasing Germany “for most of the 1930s”:

As late as July, 1938, he was involved in his own negotiations with representatives of Hitler’s government in Nazi Germany. During a meeting with Albrecht Forster, the Nazi Gauleiter of Danzig, he asked Churchill whether German discriminatory legislation against the Jews would prevent an understanding with Britain. Churchill replied that he thought ‘it was a hindrance and an irritation, but probably not a complete obstacle to a working agreement.1

Look at the date, Spartacus asks. Three months before Munich, Churchill still favored Appeasement? He thought Nazi policy toward Jews in Danzig was “probably not a complete obstacle” to peace. Dates are important, we are told. True, and so is context. In offering such broad conclusions, we must consider the circumstances.

First, Churchill was not “involved in his own negotiations with representatives of Hitler’s government in Nazi Germany.” Forster was a gauleiter (party leader) in the then-Free City of Danzig (now Gdańsk). On a visit to London, he asked to see Churchill at his Morpeth Mansions flat. Each was accompanied by a scientific advisor: Forster by industrialist-diplomat Ludwig Noé, Churchill by Professor Lindemann. Far from “negotiating,” Churchill immediately reported their conversation to Under-Secretary of State Robert Vansittart at the Foreign Office.

Read in its entirety, Churchill’s Forster report makes his objectives clear. The context shows that he was hoping for a firm British response to Hitler’s threats against Czechoslovakia:

I remarked that I was glad they had not introduced the Anti-Jewish laws in Danzig. Herr Forster said the Jewish problem was not acute in Danzig, but he was anxious to know whether this type of legislation in Germany would prevent an understanding with England. I replied that it was a hindrance and an irritation, but probably not a complete obstacle to a working agreement, though it might be to comprehension. He appeared to attach great importance to this point, and returned to it at a later stage.2

When Forster returned to Anglo-German understanding, Churchill was plain:

I said that I was not an opponent of the greatness of Germany, and that most people in England wanted to see her take her place as one of the two or three leading powers in the world: that we would not resent gradual peaceful increase of German commercial influence in the Danube basin, but that any violent move would almost inevitably lead to a world war. The situation was going from bad to worse. All countries were wasting their substance on armaments.3

To represent Germany’s anti-Jewish laws as “not a complete obstacle” accurately reflects the British government’s attitude at that time. Neville Chamberlain never expressed much concern over Hitler’s Jewish pogroms. Churchill wished then to burnish his credentials as a seeker of accommodation. It’s quite true that he favored appeasing Germany over legitimate grievances. So he tried to wheedle Forster in that direction. What he would not accept was appeasement from weakness, as at Munich three months later.

Conversing with Forster did not make Churchill a fascist. Neither did his friendly gestures toward Mussolini a decade earlier. To prove otherwise, the Spartacus article offers two 1927 quotations.

In a letter to his wife during his 1927 visit to Italy, Churchill wrote: “This country gives the impression of discipline, order, goodwill, smiling faces. A happy strict school—or no talking among the pupils.”4 At that time, Churchill was greatly exercised about the spread of Communism. Some of his friends even called it an obsession. Believing Mussolini had forestalled it in Italy, he indulged in a benign observation.

Likewise his statement that year to the Rome press about Mussolini’s “calm and serene manner.” Again this showed his aversion to Communism: “If I had been an Italian I am sure I should have been entirely with you from the beginning to the end of your victorious struggle against the bestial appetites and passions of Leninism.”5

That is the kind of pabulum you dish out when a foreign leader has promised to pay you a lot of money. Churchill, then Chancellor of the Exchequer, had just secured Mussolini’s promise (ultimately unfulfilled) to repay Italy’s £592 million war debt. (About £3.6 billion in todays money.)

Significantly Churchill said, “If I had been an Italian.” He did not state his preferences as a Briton. Indeed we may go his 1927 statement one better. In February 1933 (when Mussolini was still paying), he tossed another bouquet. Il Duce, he said, was “the greatest law-giver among living men.”6 Later, as Mussolini aligned himself with Hitler, Churchill’s praise ended. Half a century later Margaret Thatcher would say of Mikhail Gorbachev, “we can do business with him.” That didn’t make her a communist.

Another thing to remember, to paraphrase Dr. Larry Arnn, was that Churchill was political man. Also he was a democratic man. He needed, and thought it was right that he needed, the votes of a majority. If he lived in an age when voters were ardent for peace (and most ages are that), then of course he would be careful not to offend their position.

Not many Jews inhabited the city. By the outbreak of war in 1939, Martin Gilbert wrote, “all but 1600 had been allowed to emigrate…. Only 600 remained in the city when the deportations began in 1942; almost none of them survived.”7

Gilbert also explained what happened to Churchill’s views on Appeasement, five weeks after his meeting with Forster:

At Chartwell on 19 August 1938, another of Churchill’s German visitors was Major Ewald von Kleist, one of the German General Staff officers opposed to Hitler’s expansionist plans, who told Churchill that if they could only receive “a little encouragement they might refuse to march” against Czechoslovakia. After Kleist’s visit, Churchill appealed publicly for the German officer corps to overthrow Hitler.8

What happened to Albrecht Forster? Churchill’s urgings were in vain. Forster was soon agitating for Danzig to be admitted to the Reich. Indeed this was one of Hitler’s pretexts for invading Poland in September 1939. Later, as Civil Administrator for Danzig and West Prussia, Forster was responsible for exterminating 12,000 to 16,000 non-Germans. He made no distinction between Jews and Poles, regarding them all as sub-human.9

At the end of the war, Forster turned up in British-occupied Germany, where he was handed over to the Poles. Condemned for crimes against humanity, he was hanged in Warsaw in 1952. His advisor Ludwig Noé spent the war in Danzig, was not arrested, and died aged 78 in 1949.

The Spartacus article is well referenced and contains other criticisms worth debating. On Fascism and Appeasement, however, it magnifies isolated quotations to support narrow conclusions. Concerning the latter, Churchill’s view varied with circumstances: “Appeasement from weakness and fear is alike futile and fatal,” he declared. “Appeasement from strength is magnanimous and noble, and might be the surest and perhaps the only path to world peace.”10

In understanding Churchill, what matters are his broad and consistent views, not his occasional diplomatic niceties. He dealt easily with concepts and political ideas. If he had genuinely admired Fascism—as opposed to one particular fascist for a brief period—he would undoubtedly have said so. That he never did is proof that he did not admire Fascism as a political philosophy.

8 Ibid. See also Michael McMenamin, “A Mind Sequestered in its Own Delusions.”