The Churchill Project - Hillsdale College > Articles > Books > 2019 > Bouverie’s Chamberlain: “A Mind Sequestered in Its Own Delusions”

Bouverie’s Chamberlain: “A Mind Sequestered in Its Own Delusions” 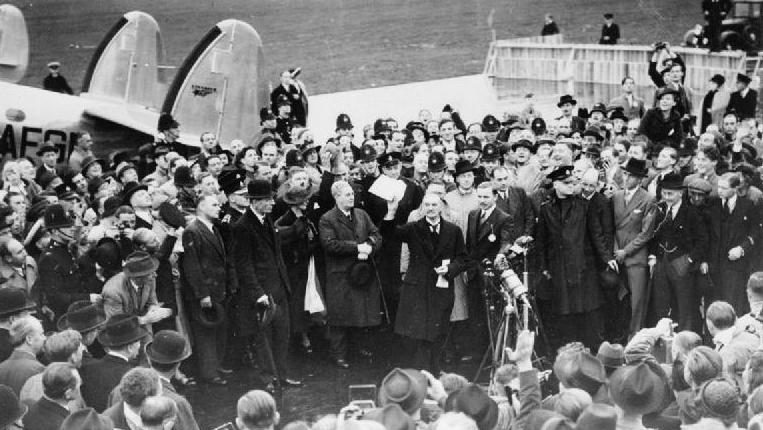 Chamberlain returns from Munich, 30 September 1938. “For the first time in his political career, the man with the umbrella, the man with the cold, flat voice, hard dark eyes, prominent teeth, sagging moustache and unengaging speech, found himself a popular hero…. Chamberlain broke into an icy smile and waved a piece of paper. [It] had been signed the night before by Hitler and himself. Chamberlain had requested it. Hitler willingly consented. He had gotten what he wanted. He was not averse to signing a scrap of paper if the old gentleman wanted it. It really pledged Hitler to nothing: ‘We regard the agreement signed last night and the Anglo-German naval agreement as symbolic of the desire of our two peoples never to go to war with one another again.’” —Paul Manning & Milton Bronner, “Mr. England,” 1941. (Imperial War Museum/public domain)

Here is a well-written, well-researched study of the British appeasement of Hitler from the time he became German Chancellor. It extends through the Munich Accord of 1938, Germany’s invasion of Poland and onslaught on the West. It concludes with Lord Halifax’s unsuccessful efforts, in late May 1940, to determine Hitler’s terms for peace.

Two previous reviewers accurately describe the Neville Chamberlain you will find in Bouverie’s book. The prime minister, writes Lynne Olson in The New York Times, illustrates the dangers of a leader “who knows little or nothing about foreign policy, yet imagines himself an expert.” Chamberlain, Olson continues, disdained advice, even from his own government. Then there was Chamberlain’s nature. Susan Pedersen in The Guardian describes him as “shy, prickly, arrogant, narrow-minded and above all vain. Once he had made up his mind, he thought criticism ‘disloyal and personally hostile.’” As Dante said: “A mind sequestered in its own delusions is to reason invincible.” 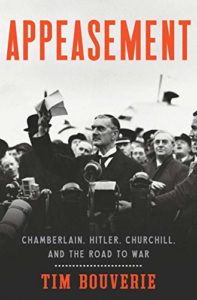 Bouverie discloses that Chamberlain read and rejected The House That Hitler Built, by Australian scholar Steven Roberts (1938). Roberts spent a fourteen-month sabbatical in Germany and neighboring countries. His book described the Reich “without any prejudice (except that my general approach was that of a democratic individualist).”

Roberts said the Nazi authorities gave him unprecedented access, despite knowing “that my attitude was one of objective criticism.” His conclusions in 1938 were astonishingly prescient:

Hitler’s consolidation [of Germany] is contingent upon ideas—such as economic Autarky, military aggressiveness, a dashing foreign policy and a general Imperialistic ideology—which of necessity would lead to war… If he persists in the policies he has enunciated, he plunges Europe into war; if he abandons them, he can no longer maintain his position,… From whichever angle we approach the question, then, we come to the inevitability of war… The position reduces itself to this. Hitlerism cannot achieve its aims without war; its ideology is that of war.

Chamberlain read and rejected Roberts’ conclusions. If he had accepted them, he wrote his sister, “I should despair, but I don’t and I won’t.” Having read the book, I would love to know why Chamberlain disagreed with it. Based on the Chamberlain portrait in Bouverie, I suspect Dante has the answer.

A major disappointment is Bouverie taking Chamberlain’s side over Churchill’s on the well-known Oster plot to depose Hitler if he invaded Czechoslovakia. Both English statesmen had multiple German sources confirming it. Yet Bouverie writes (232) that it “was dismissed by Chamberlain (probably correctly) as a fantasy.” (Emphasis added.) Why? As late as 24 September 1938, Foreign Minister Halifax told the Cabinet that that if Hitler went to war, “the result might be to help bring down the regime.” But Bouverie does not explain.

Churchill, though cautious, didn’t think the Oster Conspiracy a fantasy. He explained why in The Gathering Storm (1948). First Churchill explained the struggle between the Führer and his generals. By September the Czech crisis was upon them. The Czechs had massed thirty to forty divisions. The French Army had an 8-1 numerical superiority in the west. Russia was an unknown but possible threat. The Royal Navy was mobilizing. This produced what Churchill called an “intense, unceasing struggle” in Berlin:

First we have the account, given by General Halder, of a definite plot to arrest Hitler and his principal associates. The evidence for this does not rest only on Halder’s detailed statements. Plans were certainly made, but how far they were at the time backed by resolve cannot be judged precisely. The generals were repeatedly planning revolts, and as often drew back at the last moment for one reason or another. It was to the interest of the parties concerned after they were the prisoners of the Allies to dwell upon their efforts for peace. There can be no doubt however of the existence of the plot at this moment, and of serious measures taken to make it effective.

By the beginning of September [Halder says] we had taken the necessary steps to immunize Germany from this madman. At this time the prospect of war filled the great majority of the German people with horror. We did not intend to kill the Nazi leaders—merely to arrest them, establish a military Government, and issue a proclamation to the people that we had taken this action only because we were convinced they were being led to certain disaster.

In 1948, Churchill could only suggest that “historians should probe” this internal crisis. They did—aided by postwar memoirists. The latter included Hans Gisevius of the Interior Ministry; Chief of Ministerial Office Erich Kordt and his brother Theo at the German Embassy in London. Former Reichsbank President Hjalmar Schacht and Hitler’s interpreter Paul Schmidt were involved. So was the diplomat Ernst von Weizäcker.

Prior to endorsing Chamberlin’s dismissal of this “fantasy,” Bouverie notes that Halifax informed Chamberlain of an August 1938 meeting between Kleist and Robert Vansittart, Halifax’s deputy. Kleist stated that “if Britain would threaten to intervene, then there was a serious chance of stopping, even overthrowing Hitler.” Alas, Chamberlain was unimpressed. Kleist, he wrote Halifax, was “violently anti-Hitler.” He “reminds me of the Jacobites at the Court of France in King William’s time and I think that we must discount a good deal of what he says.”

A study in contrasts

Bouverie does not tell us that on the same day Chamberlain penned his note to Halifax, Kleist was meeting with Churchill. Here the reaction was quite different. “I am sure that the crossing of the frontier of Czechoslovakia by German armies or aviation in force will bring about a renewal of the world war,” Churchill wrote in a letter at Kleist’s request. Churchill sent copies to Chamberlain and Halifax. Kleist gave a copy of Churchill’s letter (headed “My dear sir” to protect his identity) to Canaris. The quote appeared in a captured German Foreign Office memorandum found after the war. It was headed, “Extract from a letter of Winston Churchill to a German confidant.”

Unfortunately, Kleist kept the original of Churchill’s letter in his desk and its discovery by the Gestapo in the wake of the failed 1944 assassination attempt on Hitler resulted in his execution. The Hitler apologist David Irving derisively referred to von Kleist as an “officer and gentleman.” His “treacherous career would be terminated by the Nazi People’s Court in 1944,” Irving wrote. Von Kleist lived to 2013, last survivor of the Oster Conspiracy. Justice is in the eye of the beholder.

Kleist’s message was not unique. The British government had been receiving information of a coup against Hitler from multiple sources since July. As late as 7 September, Theo Kordt, at the German Embassy in London, delivered the same message. Kordt expected Halifax to issue a public statement that Britain would stand by France over Czechoslovakia. Halifax wished to do so, but Chamberlain stopped him. The refusal in this writer’s opinion explains Chamberlain’s reasons for shunning Hitler’s enemies: It would jeopardize “Plan Z.”

Secretly drafted on 28 August by Chamberlain, his unofficial foreign policy advisor Horace Wilson and Ambassador to Berlin Nevile Henderson, Plan Z was the undoing of the Oster Conspiracy It was Chamberlain’s cardinal mistake—one which led to world war.

When Halifax met with Kordt on 7 September, Plan Z was firmly in place. At literally the last minute before Hitler attacked Czechoslovakia, it called for Chamberlain to fly to meet Hitler in Germany. He did not notify the French who, unlike the British, pledged by treaty to aid Czechoslovakia. Clearly, Plan Z was incompatible with any German regime change. Chamberlain tacitly admitted this when he finally informed Halifax of Plan Z on 8 September.

Bouverie’s account of the appeasement story is not new, but well-written and worth reading. But his failure to understand and factor in the real reasons Chamberlain negotiated with Hitler at Munich makes it inadequate in this vital aspect.

Far from a “fantasy,” the 1938 conspiracy against Hitler is well documented. The best treatment in this writer’s opinion is Patricia Meehan’s The Unnecessary War, Whitehall and the German Resistance to Hitler (1992). Terry Parssinen’s The Oster Conspiracy of 1938 (2003) is also good. Likewise are two books by Germans: Peter Hoffman’s German Resistance to Hitler (1988); and Joachim Fest’s Plotting Hitler’s Death: The Story of the German Resistance (1996). Fest considered the 1938 conspiracy “probably the most promising of all the plots against Hitler.” Richard Langworth includes the Oster Conspiracy in “Munich: The Case for Resistance,” in Churchill and the Avoidable War. For a Cliff Notes version of the plot, see my article “Regime Change 1938: Did Chamberlain Miss the Bus?” in Finest Hour 162, Spring 2014.

Bouverie’s description of the 1938 plot as “probably correctly” a fantasy is inexplicable.  He lists Meehan’s book in his bibliography along with the memoirs of Erich Kordt, who wrote that swallowing Hitler’s terms at Munich “prevented the coup d’état in Berlin.” Even Henderson, the pro-Chamberlain British ambassador to Germany, thought the Hitler plot genuine. On 6 October, a week after Munich, Henderson wrote Halifax: “By keeping the peace, we have saved Hitler and his regime.”