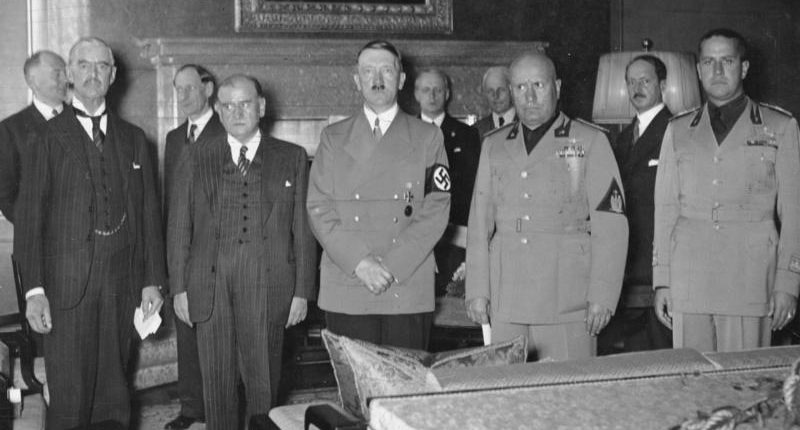 Robert Harris, author of the famous historical novel Fatherland, has published a new novel on Munich. He says it will rehabilitate Neville Chamberlain’s decision to accept Hitler’s demands for the Czech Sudetenland. His thesis—“Chamberlain’s finest hour” as he calls it—is that Munich bought time for Britain to prepare for war. Among other things, he contends in interviews that by the summer of 1940, the Royal Air Force had ten times as many aircraft as it had had in 1938.

The specific claim about aircraft is valid, according to an authoritative article, “From Peace to War: Royal Air Force Rearmament Programme, 1934-1940,” by Martin Waligorsk on Spitfire.com. The RAF, Waligorsk writes, went from about 250 aircraft (fighters and bombers) in first quarter 1938 to about 2500 by third quarter 1940. (The downturn in the fourth quarter probably represents losses in the Battle of Britain.) By this measurement, Britain indeed had ten times as many aircraft in summer 1940 than in January-March 1938. We must be mindful however that the Luftwaffe was not standing still.

According to Professor Carroll Quiqley, writing over half a century ago, at the time of Munich, the Anglo-French and Germans each had about 1000 military aircraft. By 1940, Britain had a slight qualitative advantage. Of course, the question is not who had more aircraft, but how they used them. William Shirer, in his classic, The Collapse of the Third Republic, says one of the big unanswered questions during the fall of France was what happened to the French air force.

Britain’s primary contribution to a Czech campaign in 1938 would not have been its air force but its navy. Churchill wrote: “…it did not take much thought” to know the Navy “could not be deployed on the Bohemian mountain front.” But it could enforce a serious blockade of Germany. Before the Munich agreement, on 27 September 1940, the Admiralty ordered mobilization of the Fleet. Hitler told Goering, “the English fleet might shoot after all,” and postponed German mobilization.

The Harris novel is not the first attempt to rehabilitate Mr. Chamberlain. Two biographers, Keith Feiling and David Dilks, have capably stated his case as he saw it. John Charmley has written books justifying Chamberlain’s attempts to save peace. Churchill himself, though censorious about Prime Minister Baldwin, went easier on Baldwin’s successor: “Neville Chamberlain acted with perfect sincerity according to his lights and strove to the utmost of his capacity and authority, which were powerful, to save the world from the awful, devastating struggle.”

In Churchill and the Avoidable War, I wrote that we see things as we do now because we know what happened. Similarly, Robert Harris says: “In 1938, what is now the past was the future.” Alistair Cooke’s remark is apposite: “Every village in England has its memorial to the dead of World War I, its long list of names. The British people would do anything to stop Hitler, except fight him.”

Although British attitudes were hardening by 1938, Chamberlain reflected the perceived wishes of his countrymen. Where he was wrong was refusing to accept that their wishes were no part of reality, and failing to lead them to the truth. Nonetheless, without the rearmament programs he started, Churchill would not have won the Battle of Britain. That will always stand to Mr. Chamberlain’s credit. We should acknowledge this.

The historian Sir Max Hastings, in a thoughtful review of the Harris book, joins Harris in concluding Chamberlain made the right decision. Britons would “recoil” from another war twenty years after the last, merely to deny Germany the Sudetenland. Munich, he adds, “laid bare…Hitler’s mendacity and limitless ambition.” Thus Britain went to war in 1939 “united in the face of evil, as it had not been a year later…. I part company with Robert Harris because I decline to see virtue in what Chamberlain did, rooted in brutal realpolitik, not principle. I nonetheless share Harris’s view that the deal was inescapable, and ultimately served Britain’s interests well….”

One must ask: what principle was rooted? How can there be no virtue in the Munich deal, if it served the cause of the virtuous? Sir Max says Harris’ “key point” is that “in Hitler’s mind the Sudetenland offered the best justification for a war that he would ever have—incomparably better than his contemptible pretext for invading Poland a year later.” But it made no difference which pretext was better. What mattered was whether Hitler would have done so well if the British, French and Czechs had resisted. Harris omits this consideration.

Laying bare Hitler’s mendacity carried a high price, including the Czech armaments industry. Churchill and the Avoidable War notes, for example, that three of the ten panzer divisions in the invasion of France in May 1940 were of Czech manufacture. Williamson Murray wrote: “It is hard to see how Germany’s three divisions of light tanks could have achieved the smashing victories Hitler promised in either autumn 1938 or spring 1939.”

This was the Wehrmacht that, earlier in the year, had clanked into Austria with 30 percent mechanical breakdowns. An infuriated Hitler awaited his army in Vienna. Parts of it grated to a halt in the suburbs a week later. Even this dismal performance was possible thanks to Austrian gas stations and rail services. As Manfred Weidhorn wrote: “The Wehrmacht performed less like the fearsome military machine of 1939-41 and much more like the soldiery in a Viennese operetta.” Unlike the Austrians, the Czechs mobilized 1.5 million soldiers, armed to the teeth in mountain strongholds. “That these facts were either not observed or not disseminated by the intelligence agencies of Britain and France,” Weidhorn wrote, “is only one more example of the rule that ‘intelligence’ is a misnomer.”

Germany’s 1938 economic situation was also doubtful. It was strained in part by construction of the “West Wall” (Siegfried Line) opposite France’s Maginot Line. Hitler’s only abundant raw material was coal and some iron ore. French and Swedish ore was essential. Oil, rubber, manganese and aluminum were in short supply or non-existent. A British naval blockade would have severely curtailed these imports. At the height of the Munich crisis the Reich Defense Committee reported:

…in consequence of Wehrmacht demands and unlimited construction on the West Wall, so tense a situation in the economic sector occurred (coal, supplies for industries, harvest of potatoes and turnips, food supplies) that the continuation of the tension past October 10 would have made a catastrophe inevitable.

Consider finally the testimony of Field Marshal Keitel at Nuremberg. The Czech representative asked: “Would the Reich have attacked Czechoslovakia in 1938 if the Western Powers had stood by Prague?” Keitel replied: “Certainly not. We were not strong enough militarily. The object of Munich was to get Russia out of Europe, to gain time, and to complete the German armaments.”

Churchill steadfastly maintained that 1938, not 1939, was the time to take a stand. Aside from the moral issues, he pointed to what he saw as Munich’s greatest penalty. In August 1939, the German-Soviet non-aggression pact neutralized Germany’s leading potential military threat. That is something Mr. Chamberlain’s defenders rarely mention.

The failure at Munich was one of willpower, as Victor Davis Hanson writes:

Why the Western world—which was aware of the classical lessons and geography of war and was still suffering from the immediate trauma of the First World War—chose to tear itself apart in 1939 is a story not so much of accidents, miscalculations and overreactions (although there were plenty of those, to be sure), as of the carefully considered decisions to ignore, appease, or collaborate with Adolf Hitler’s Nazi Germany, by nations that had the resources and knowledge, but not the willpower, to do otherwise.

the world will get along much better when modern Western leaders accept the necessity of cutting deals with Russia’s thuggish President Putin and China’s brutal President Xi. But we need to recognize that there is no chance of persuading such people to keep their word or respect our vital interests, unless we possess the armed forces to defend them by force, if necessary.

That was the lesson Churchill drew too.