The Churchill Documents, volume 20, “Normandy and Beyond, May-December 1944” 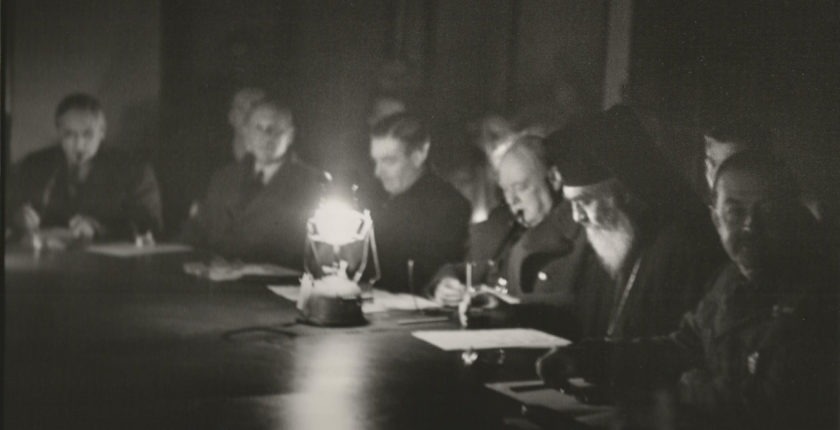 Featured Image: Negotiations by lamplight: Churchill in Athens, December 1944, assured the survival of Greek democracy by installing Archbishop Damaskinos (to WSC’s left) as regent in a coalition government.

The Churchill Documents, Volume 20, Normandy and Beyond, May-December 1944, edited by Martin Gilbert and Larry P. Arnn. Hillsdale, Mich.: Hillsdale College Press, 2018, 2598 pages, $60. This article was first published in Commentary (May 15, 2018) and is republished here by kind permission of the editors and the author.

Hillsdale College has for many years now been undertaking the truly mammoth task of publishing every significant primary document relating to the life of Sir Winston Churchill, a project that is now finally nearing its end.  Normandy and Beyond, the twentieth volume of documents, has been produced with the same scholarship, criteria for choice of material, meticulous footnoting and attention to detail that has characterized all its predecessors. It takes Churchill from 1 May 1944, five weeks before D-Day, to the end of that tempestuous year, as the Prime Minister returned from strife-torn Athens after Christmas, having successfully put in place the military and political arrangements that saved Greece from Communism. 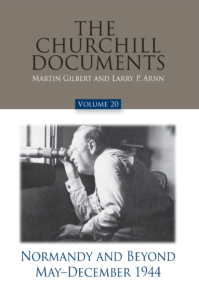 Despite its monumental length, there is scarcely a page at which the reader will not stand in awe at Churchill’s linguistic fluidity, clarity of thought and expression, sense of humour, foresight, sheer bloody-mindedness or capacity for impish mischief. Running through the entire length of the work is also a cold hatred of Hitler and the Nazis. When Normandy and Beyond ends in December 1944, the Germans have just been stopped from breaking through to the River Meuse, as the Battle of the Bulge turns in the Allies’ favour.

The book is packed with Churchill’s love of unusual words and forceful expressions, many of which have never appeared in any previous biography of him. Writing to Anthony Eden, his foreign secretary, on May 7th, for example, he complained of way the Special Operations Executive “barges in an ignorant manner into all sorts of delicate situations. They were originally responsible for building up the nest of cockatrices for EAM [Communist partisans] in Greece.” (A cockatrice, we are promptly advised in a footnote, “is a mythical, two-legged dragon or serpent-like creature with a cock’s head.”)

On May 22nd, General Sir Hugh Tudor, who had served in Palestine, wrote to Churchill about an article in a New York Arabic newspaper proposing that Jerusalem be the seat of the new United Nations organization after the war. “It is pointed out that Palestine is one of the most central places in the world and therefore as suitable as any for this purpose,” Tudor tells the Prime Minister. “It is also pointed out that Jerusalem is held sacred by the people of three great religions; so it would be best to internationalize it.” He added, “It would certainly disturb the Muslim world greatly if it were put under the Jews,” which probably explains why Churchill, a convinced Zionist, declined to go into the issue with him.

“Give my love to Randolph should he come into your sphere,” Churchill wrote to Marshal Tito on May 25. “I wish I could come myself but I am too old and heavy to jump out of a parachute.” (Tito in turn was forever grateful that Churchill had sent his own son to fight with the Yugoslav partisans.) Churchill hoped that Tito might be drawn in into the Western rather than the Soviet sphere of influence after the war. Normandy and Beyond sees him considerably hardening his attitude towards the Russians, even two years before his Iron Curtain speech. “I have found it practically impossible to continue correspondence with them,” he told President Roosevelt, referring to the Russian foreign minister Vyacheslav Molotov. “…but I note that after each very rude message they send to me, they have done pretty well what was asked. Although Molotov was most insulting about Rumania, they have today told us they accept the broad principle that they take the lead in the Rumanian business and give us the lead in Greece.” Churchill constantly asked Roosevelt for tougher stances against Russia, but rarely got them. “Do not hesitate to be blunt with these Russians when they become unduly truculent,” he told A.V. Alexander, his First Lord of the Admiralty, that month.

President Trump might derive assurance from reading Churchill’s 7 May 1944 note to General Sir Hastings “Pug” Ismay, his Military Secretary: “I do not like press conferences, even off the record, on the eve of an important battle. I have recently been perturbed at reported statements from Naples, one in the Corriere, explaining that we are about to attack. Is it really necessary to tell the enemy this?”

One enemy of Churchill’s who is today considered a secular saint, Mohandas Gandhi, comes in for harsh treatment in Normandy and Beyond. “He is a thoroughly evil force,” the PM wrote to Lord Wavell, Viceroy of India, “hostile to us in every fibre, largely in the hands of the native vested interests and frozen to his idea of the hand spinning-wheel and inefficient cultivation methods for the over-crowded population of India.”  (This is a remarkable juxtaposition of the “forward thinking” Gandhi versus Churchill, whose critics said his views on India were outdated.) Although he had encouraged Gandhi after the India Act passed over his opposition in 1935, during the war Churchill rarely saw Gandhi as anything other than a fraud.

Gandhi maintained a curiously indifferent attitude toward the Bengal famine in 1943—in contrast to Churchill, who did his best to ease its effects. Normandy and Beyond contains President Roosevelt’s refusals to Churchill’s repeated requests for American shipping to transport Australian wheat to Bengal. “I regret exceedingly the necessity of giving you this unfavorable reply,” the President wrote Churchill on 1 June 1944. Revisionist historians and journalists who attempt to blame Churchill for the famine and its aftermath should read this volume, which absolves him from their ahistorical and fundamentally ignorant attacks.

The deep divisions between Roosevelt and Churchill over their rival plans for assaults in the South of France and the Balkans are recorded in detail here. They ended with Roosevelt prevailing, to Churchill’s great chagrin, as privately expressed to friends such as Field Marshal Smuts in terms almost verging on the anti-American. Churchill’s pain and anger at the way the Warsaw Uprising failed to be supported by Stalin (referred to as “Uncle J” by FDR here) is also evident. Churchill asked Roosevelt to authorise the U.S. Army Air Force to supply the Uprising, “landing if necessary on Russian airfields without their formal consent.” He added: “We would of course share full responsibility with you for any action taken by your Air Force.” Roosevelt merely replied a little later that, “The problem of relief for the Poles in Warsaw has therefore unfortunately been solved by delay and by German action and there now appears to be nothing we can do to assist them.”

The assassination of Churchill’s friend Lord Moyne, his minister to the Middle East, by the Irgun Zwai Leumi underground movement in November 1944 tested his Zionism as never before, but the Cabinet minutes merely record, “The Prime Minister suggested that the Secretary of State for the Colonies should see Dr. Weizmann and impress upon him that it was incumbent on the Jewish Agency to do all in their power to suppress these terrorist activities.” Yet even the murder of a friend of forty years could not disturb his dreams for a Jewish national homeland.

The overall impression of Normandy and Beyond, which covers eight crucial months of World War II, is that Britain was extraordinarily fortunate to have a leader of Churchill’s calibre. In these months, V-1 and V-2 terror weapons were still landing on Britain, and the Nazis were still showing themselves to have a terrifyingly potent capacity for counter-attack. We are also very lucky to have Hillsdale College devote the time, money, scholarship and effort to build this magnificent memorial. Winston S. Churchill began when Randolph Churchill started organizing the biography in 1962. It will end finally when Hillsdale publishes Document Volume 23 in 2019.

Andrew Roberts is the author of Masters and Commanders: How Four Titans Won the War in the West and Storm of War: A New History of the Second World War. His next work, Walking with Destiny, a new biography of Sir Winston Churchill, may be ordered now.