The Churchill Project - Hillsdale College > Articles > Books > 2019 > “A Few Words of My Own”: Thoughts on Completing the Official Biography

“A Few Words of My Own”: Thoughts on Completing the Official Biography 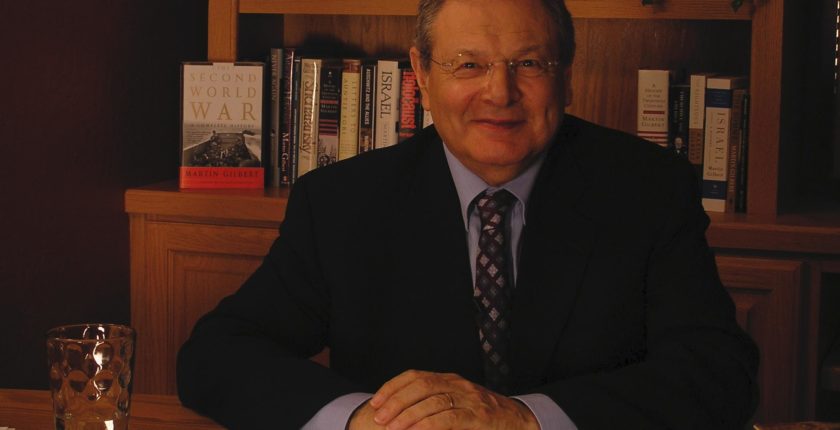 Photograph by courtesy of Lady Gilbert.

…Martin Gilbert wrote this with satisfaction in 1989, just after completing the final narrative volume of the official biography, Winston S. Churchill: Never Despair 1945-1965. Hillsdale College now publishes the twenty-third and final document volume. Its title, suitably, comprises Churchill’s words preceding “Never Despair”—“Never Flinch, Never Weary.” It seems appropriate at this hour to remember Martin’s thoughts then, taken from the Gilbert Papers now at Hillsdale. We have edited only the dates, for thirty years have passed. Our deepest regret is that Martin is not here to share in the joy. Without him, there would be nothing to build on. With him, nothing was impossible.

In 1961, when Randolph Churchill started work, he had at his disposal an estimated fifteen tons of paper. This was his father’s personal archive, now at Churchill College, Cambridge. In 1962, when I joined his research team, Randolph had already begun to search out yet more material. How vividly I remember his delight when one or other researcher (and especially the director of research, Michael Wolff) brought to the seclusion of Randolph’s house in the Suffolk village of East Bergholt, where we worked, yet another batch of the hundreds of letters written by Winston Churchill to friends and colleagues, of which Winston himself had kept no copy.

One such batch of letters, misfiled in the New York public library under the American novelist Winston Churchill, contained a dozen remarkable descriptions by Churchill of his early political efforts and ambitions, while still (until 1904) a young Conservative, hesitating whether or not to join the Liberal Party. Another batch of such handwritten letters was kept at her home in a locked box by Pamela, Countess of Lytton, of whom Churchill had once written (to his mother) that she was “the most beautiful girl I have ever seen.” These letters to Lady Lytton spanned the years 1898 to 1959. “I am getting much older now the stimulus of power and responsibility has fallen from me,” he wrote to her in June 1955, “and I totter along in the shades of retirement.”

As well as Churchill’s letters to his friends, there other letters which, on a vast scale, had begun to transform Randolph’s biography. By 1968, when he died, they rapidly transformed mine. These were the long, affectionate, almost always handwritten letters Churchill sent to his wife whenever they were apart. The day on which Lady Churchill decided they could become a part of the biography ensured a truly remarkable extra dimension of our knowledge of Churchill’s moods and motives.

One letter in particular has remained engraved on my mind since the day I first read it. Dated 28 March 1916, it was written from the trenches on the Western Front. Churchill had just watched a German artillery barrage traverse the front line. One shell exploded quite near him. Had he been hit, he wrote to his wife that night, it would have been “a good ending to a chequered life, a final gift— unvalued—to an ungrateful country, an impoverishment of the war-making power of Britain which no one would ever know or mourn.”

Every one of Churchill’s letters to his wife are included in The Churchill Documents (earlier known as Companion Volumes) the last of which is about to be published. These document volumes, initially imposed by Randolph on a somewhat reluctant publisher, make available to the reading public the full range of Churchill’s private correspondence. They will form the basis of innumerable future studies—and indeed of future biographies.

Motto of the biography

On being confronted by such a formidable amount of personal material, Randolph Churchill adopted as the motto for the work: “He shall be his own biographer.” Churchill’s letters were to be the basis of his son’s narrative. One must remember that in 1962, no Cabinet, or even departmental, documents could be used. Under the Fifty-Year Rule then in force, the most recent official archives available were those for the year 1912.

In 1965 (the year of Churchill’s death) the law regarding government documents changed. Instead of having to wait fifty years before secret documents could be seen, a Thirty-Year Rule was established. I am unable to forget this: Had the Fifty-Year Rule remained in force, the official archives would be open only up 1938 by the time I finished the last narrative volume in 1988. The inner workings of Churchill’s leadership in the Second World War would have still been largely secret.

Since 1965 Churchill has no longer had to be “his own biographer,” even though his personality still towers over every page of the narrative. I am quite content that this should be so. Indeed it has been my aim to try to place the reader in Churchill’s presence.

In 1979, the British government agreed to open the archives of the Second World War in their entirety. These included the Ministry of Defence, of which Churchill had made himself head in May 1940. It then became possible to study papers such as the meetings of the War Cabinet, the Chiefs of Staff Committee—over which Churchill presided—and the Defence Committee. Here were made the most sensitive decisions in 1940, including the decision not to open peace negotiations after France’s fall.

An Expansion of scope

For me, the unforeseen opening of the official archives made possible a quite different, intricate and comprehensive biography. It also demanded, if justice were to be done to Churchill’s achievements, more Document Volumes than had been envisaged in the original scheme. (Ultimately, it required eight volumes of The Churchill Documents to cover World War II.)

It now became possible to go far beyond even Churchill’s own six-volume account of his war leadership. We could see the actual arguments which were put forward at the time for and against every element of war policy. We learned where Churchill prevailed and where he was overruled.

Above all we could trace the impact of Enigma—the British eavesdropping on the most secret messages between German headquarters and senior commanders on land, sea and air. By a coincidence of timing, the two narrative volumes of the Churchill biography covering the Second World War, Finest Hour 1939-1941 and Road to Victory 1941-1945,  were the first books about a war leader which were able to show the part which this most secret source had played at the highest level of decision making. Churchill called the Enigma messages his “golden eggs.” After the war he pressed for honours for those who had helped to decrypt them. In a Top Secret message in May 1945 he said, “the advantages gained through Enigma in the whole course and conduct of the war, cannot be overestimated.” 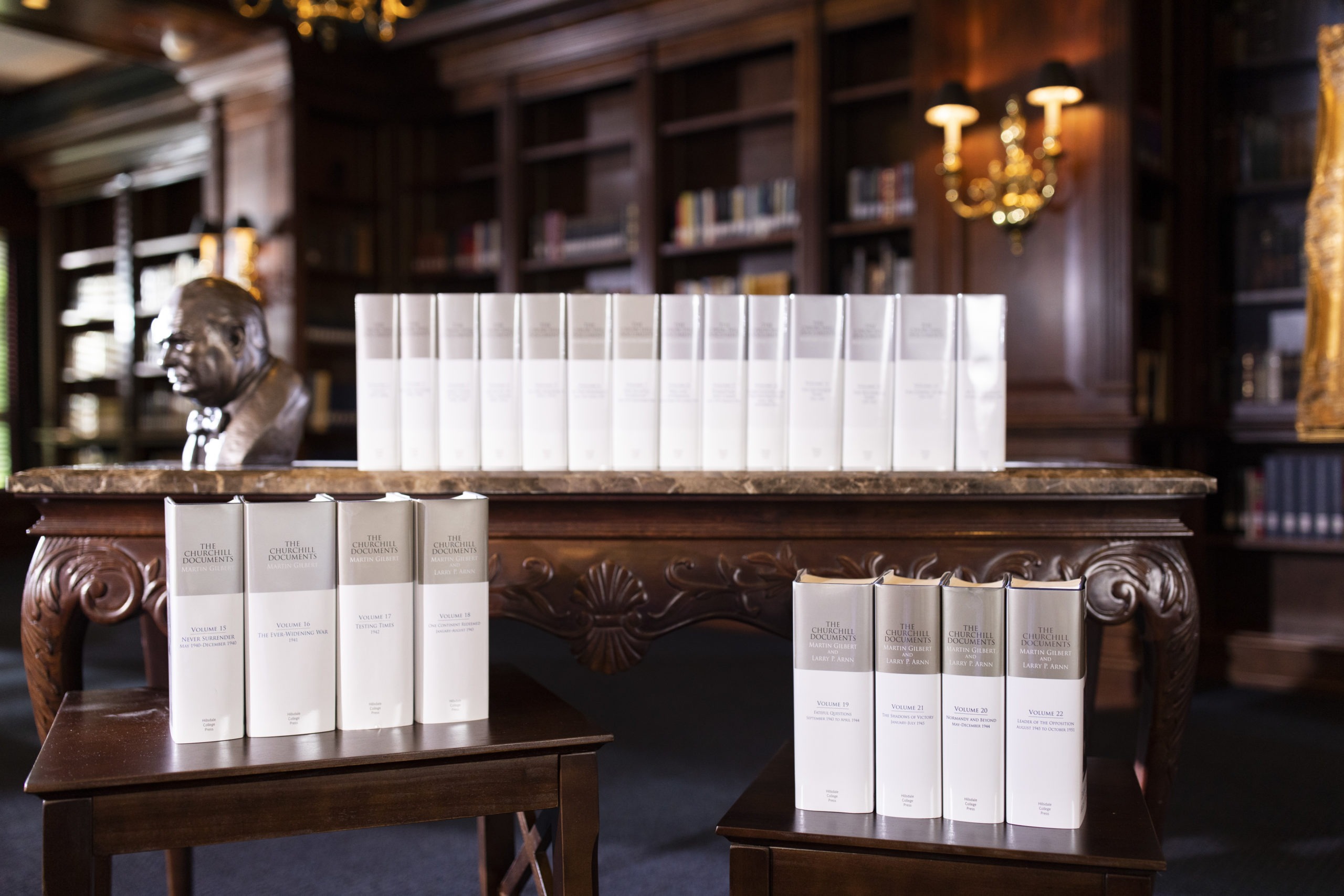 Also opened as a result of the Fifty-year Rule were the full, unedited transcripts of every meeting and telegraphic exchange between Churchill and Roosevelt, and between Churchill and Stalin. Churchill’s opening remarks when he and Stalin met for the first time in 1942 were: “I would not have come to Moscow unless I felt sure that I would be able to discuss realities.” The first of those realities was the Anglo-American inability to mount a Second Front in 1942, or even in 1943. The British interpreter jotted down on his note pad how, on hearing this bad news, “Stalin’s face crumpled up into a frown.” Patiently, Churchill set about explaining to the Soviet leader the reasons for the delay.

Churchill’s private papers and the government’s archives were a true bonanza. Now every episode of his stormy career could now be separated from often bizarre accumulations of myth and half truth. It is possible to trace in detail, for example, Churchill’s determined attempts to give the miners’ grievances due weight during the General Strike in 1926, when he was Chancellor of the Exchequer. Likewise we could show his equal determination to end the Cold War in 1955. He urged President Eisenhower to accept a new concept, that of a summit, with Stalin’s successors. “I have a strong belief that Soviet self-interest will be their guide,” Churchill explained to Eisenhower. That was in May 1953, over sixty-six years ago. He added: “My hope is that it is their self-interest which will bring about an easier state of affairs.”

On to the end

Churchill’s second premiership, portrayed by his doctor, Lord Moran, as a time of dotage, can now be seen in truth. Thanks to the opening of the government archives, we see a period when he was very much alert to the many issues pressing in upon his fellow countrymen, from housing to the hydrogen bomb. His desire for a summit on the nuclear issue, and the care and precision with which he argued his case, are hardly the marks of a senile Victorian.

In 1967 it was my good fortune to have been given by Merton College, of which I was then a junior research fellow, an extended sabbatical. No teaching, lecturing, examining or administrative duties could now come between me and the biography. Its completion, at times, seemed very distant. Once, however, I came across a phrase by Churchill: “work, which is a joy….” I understood at once what he meant. I was lucky to have had an unbroken forty-eight years of such joy.