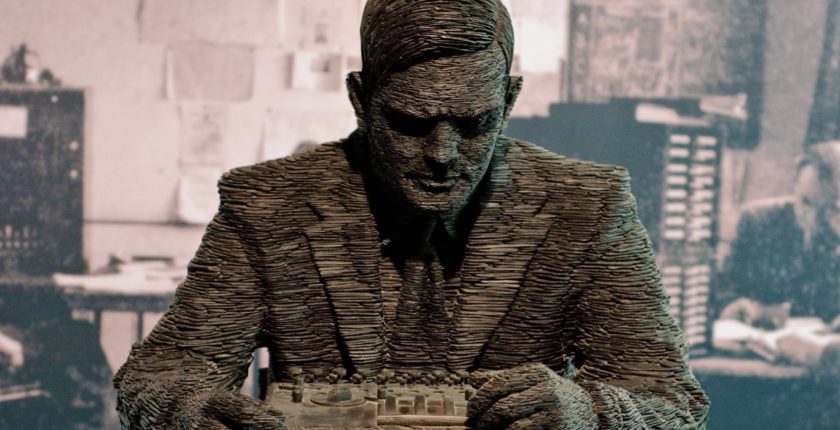 Since the early 1990s it has been stated and endlessly repeated that Winston Churchill said Alan Turing OBE FRS (1912-1954) “made the single biggest contribution to Allied victory in the war against Nazi Germany.” Turing’s contribution was indeed great, but there is no record of Churchill having issued such a singular encomium.

As head of Hut 8 at Bletchley Park, cryptanalyst Alan Turing (pronounced “TWER-ing”) wrote the theoretical description of a programmable digital computer before any had been built, and formalized the concept of the algorithm—vital steps toward the modern computer. Turing also developed the electro-mechanical “bombe” that found settings for the German Enigma key.

Turing was honored by George VI but treated reprehensively by the postwar British government, which disregarded his wartime contributions. In 1952 he was prosecuted for homosexual acts, which were still criminalized in the UK. In lieu of prison he accepted treatment with estrogen injections (chemical castration). He died in 1954, less than forty-two years old, allegedly from suicide through cyanide poisoning, but some believed his death was accidental.

In 2009, Prime Minister Gordon Brown made an official apology on behalf of the British government for the way in which Turing had been treated.

Turing’s sad end has given rise to supposition that Churchill was a homophobe, which claims as proof the despicable treatment of Turing in the Fifties. But Churchill had no part in this, and his only expressed concern for homosexuals, several of whom were close friends of his, was that in those days they were susceptible to blackmail.

We find no attribution to a specific statement by Churchill that Turing “made the biggest single contribution to Allied victory,” although we would not be surprised to learn he said something along those lines. Churchill was a generous man, who honored those who gave their all for victory. In August 1940 in his famous tribute to “The Few,” it was the Royal Air Force which he said were “turning the tide of the world war by their prowess and devotion.” He certainly knew who Turing was from correspondence with the scientist.

Professor David Stafford, whose Churchill and Secret Service is a standard work and who has spent a lifetime of research on the subject, writes: “I do not think Churchill would have heaped such extravagant praise on any one individual, as distinct from, say, the vast team at Bletchley Park and its collective effort. Of course I can’t prove it, although I wish I could.”