“Randolph, Hope and Glory”: Co-author of the Official Biography 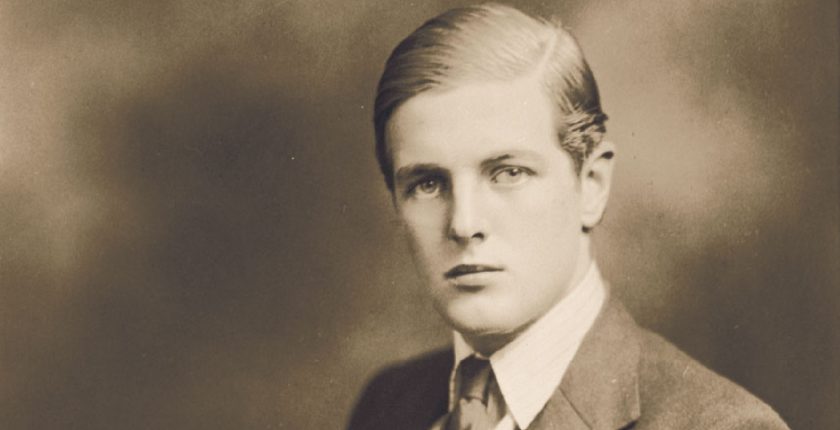 Randolph Churchill, Sir Winston’s only son, has done well by biographers—less so by contemporary commentators on his life and times.

Written off recently as “a violent drunk whose life was marred by scandals, divorces and infirmity of purpose,” Randolph S. Churchill (1911-1968) has benefitted by three biographies and a book of tributes—all profitable reading for those who wish to understand him.

The first was a valedictory, The Young Unpretender (The Grand Original in USA), compiled by Kay Halle, the Washington socialite most responsible for advancing Sir Winston’s honorary American citizenship, who almost married Randolph in the 1930s. It was followed by a family account, Anita Leslie’s Cousin Randolph, and the first full biography, Brian Roberts’ Randolph: A Study of Churchill’s Son.

In 1996 Randolph’s son Winston produced the most elaborate biography of all, completing a trilogy of filial “lives” that began with Sir Winston’s two volumes of his own father (1908) and Randolph’s first two volumes of the Official Biography (1966-67). Philip Ziegler remarked that “the biography of the present author by his son can presumably be expected in about twenty years.” We shall see.

Since receiving one of the last letters Randolph Churchill ever wrote, I have always been among his admirers—and yes, in Martin Gilbert’s words, “despite everything.” True, he drank (up to two bottles of whisky a day, his son says). True, he was twice divorced (although his last love, Natalie Bevan, lasted from 1957 through the end of his life, because she was a singular woman who brooked no nonsense from him, thereby earning his complete devotion).

But “infirmity of purpose” is scarcely a charge that sticks. Randolph’s six attempts to enter Parliament—he held only an uncontested seat in 1940-45—were condemned by his refusal to put up with local party humbug, but hardly infirm. His career as a highly-paid journalist was studded with scoops; his biographies, Lord Derby: King of Lancashire and two volumes of Winston S. Churchill, were meritorious. With his son he wrote one of the most compelling accounts of the 1967 Arab-Israeli conflict, The Six Day War. And most of the “scandals” involving Randolph turned against the British press, whose owners and minions he regularly, roundly, and justifiably excoriated, in and out of court.

Above all, Randolph was intensely interesting. “Aside from his heroically dismal manners, his gambling, arrogance, vicious temper, indiscretions, and aggression,” Andrew Roberts wrote, he “was generous, patriotic, extravagant and amazingly courageous.” This combination of traits justifies three biographies and Kay Halle’s book of fulsome tributes. To show how fine Halle’s collection is, consider the entry by Jacqueline Kennedy Onassis. She wrote about 9 April 1963, “the spring day after rain,” when President Kennedy, in Randolph’s presence, proclaimed Sir Winston an honorary citizen of the United States:

We met in [the President’s] office. Randolph was ashen, his voice a whisper. “All that this ceremony means to the two principals” I thought, “is the gift they wish it to be to Randolph’s father—and they are both so nervous it will be a disaster.”…Jack spoke first but I couldn’t listen. Then the presentation. Randolph stepped forward to respond: “Mr. President.” His voice was strong. He spoke on, with almost the voice of Winston Churchill. He sent his words across the afternoon, that most brilliant, loving son—speaking for his father. Always for his father. But that afternoon the world stopped and looked at Randolph. And many saw what they had missed….I will forever remember that as Randolph’s Day.

Other impressive people, like Sir Martin Gilbert, testified to Randolph’s noble qualities. In 2009 I led a party of Churchillians to Stour, Randolph’s home in East Bergholt, Suffolk. Martin joined us, his first return to the place where Randolph died in 1968, and spoke to us of those times:

I learned at Stour that history was concerned with character and humanity, as well as with facts and achievements….Research at Stour was as far from any dry-as-dust archive or ivory tower as one could imagine. On the outside of the house, overlooking the terrace, Randolph affixed a plaque: “I am come to a determination to make no idle visits this summer, nor give up any time to commonplace people. I shall return to Bergholt. —John Constable (1776-1837)”

Were we, Randolph’s researchers, “ghosts” and “paid hacks,” among the “commonplace people” when storms raged? We certainly felt as much. It was Natalie Bevan who, on so many occasions, raised both our spirits and his; or, in raising his, raised ours. In September 1964 all four researchers (Michael Wolff, Andrew Kerr, George Thayer and myself ) and the four secretaries on the payroll at the time received a collective exhortation, one of Randolph’s (and his father’s) favourite verses:

The heights of great men reached and kept,
Were not attained by sudden flight,
But they, while their companions slept,
Were toiling upwards in the night.”

Randolph’s personality, with its exhortations and eccentricities, kept the team on its toes. On one occasion a telegram arrived in which the address was given not as East Bergholt but Beast Bergholt. He announced at once, with a broad grin, that he was now “the Beast of Bergholt.”

Alas the larger world knew only the Beast: “Randolph had no idea how unpleasant and offensive he could be when he was drunk,” his son wrote. “By the time he was sober he had largely forgotten or become oblivious to what had passed. When in good form, he could be the best of companions, a brilliant conversationalist, bubbling with wit and panache. A dinner hostess could be assured that whatever else might happen, the evening would not be dull if Randolph was among her guests, and in a crisis there was no friend more loyal….He was as likely to be offensive to a prime minister as a waiter; he could battle heroically for what he believed to be right at sometimes considerable cost to himself.” Randolph himself once said, “I am an explosion that leaves the house still standing.”

Sir Martin told me a story that exemplified Randolph’s damn-the-torpedoes loyalty. It involved John Profumo, the War Minister whose career was cut short in 1963, when he was forced to resign in a sex scandal. Shocked by the treatment of the Profumos by our ever-so-thoughtful media, Randolph went into action. He offered them the use of Stour as a refuge.

“I still have the instructions we were all given,” Martin said, “headed OPERATION SANCTUARY, marked SECRET, and explaining how we were to look after OGs (Our Guests).” Randolph would vacate the premises and the Profumos would arrive. “If any reporters followed, ‘admission to the house or garden will be denied.’ If they refused, the police would be called, ‘during which time our guests will retire upstairs. We will not stand any rot.’ The Profumos were to be treated as if they were in their own home.”

Michael Foot, (the socialist who twice beat Randolph for a seat in Parliament) could say unblushingly, “I belong to the most exclusive club in London; the friends of Randolph Churchill.” Thus too his son could close his biography so movingly: “We buried him in Bladon churchyard, beside his grandfather, and his father, whom he loved and revered so deeply. To this day the memory of him lingers on in the hearts of his friends.” But the historians wrote (and still write) forcefully of the character faults that proved “a limit to what even his friends could accept.”

His Father’s Son included a great deal of Randolph’s correspondence with his father, largely then unpublished, which formed a poignant portrayal of their relationship with his father, and makes that book extremely pertinent to Churchill studies. Christopher Hudson wrote: “If [Winston] had not been a great man, he would have been a perfect father—building a tree house, helping Randolph with his homework, counselling and encouraging, and later giving him the annual allowance on which Randolph depended, even when Winston was so broke he [tried] to sell Chartwell.” Unfortunately, Winston also spoiled his son, allowing him to hold endlessly forth in company with the leading political lights of the day—a practice which not only made Randolph a superb extemporaneous speaker, but bred a disdain for people of lesser intellect, and an all-too-ready appetite for alcohol.

Early on, Randolph’s father was under few illusions. In 1929 he wrote: “Your idle and lazy life is very offensive to me. You appear to be leading a perfectly useless existence. You do not value or profit by the opportunities Oxford offers….To these causes of dissatisfaction you add an insolence toward men and things which is rapidly affecting your position outside Oxford and is certainly not sustained by effort or achievement.” This was a remarkable parallel to the dreadful letter Winston’s father wrote him around the same age, warning that he was in danger of becoming a “social wastrel.”

But Winston Churchill never let the sun go down upon his wrath, and when Randolph’s idleness ended in lecture tours and races for Parliament, he lent his support, even when his son’s campaigns were politically unhelpful to him. During World War II, when Randolph served with distinction in North Africa and Yugoslavia, Winston entrusted him with sensitive tasks which he performed with skill and discretion. Tito wrote movingly to the prime minister: “You have sent us your son.” After the war, Churchill willed his invaluable archive to Randolph; and in 1959, he bestowed the ultimate accolade by inviting Randolph to be his official biographer.

Randolph in turn honored and copied his father, as his father had his grandfather. But simultaneously, he nursed a grievance that usually surfaced whenever he was drunk. At a dinner on Onassis’s yacht in 1963 (where Randolph went during the Profumo scandal), he suddenly turned on his aged father with a stream of invective that sent Sir Winston to his cabin, pale and shaking.

Onassis got rid of Randolph the next day by arranging for an invitation to interview the King of Greece. Randolph left the ship smiling, but in the launch Anthony Montague Brown found him weeping: “You didn’t think I was taken in by that plan, do you?” he said. “I do so very much love that man, but something always goes wrong between us.”

Readers wishing to know about the genesis of what Randolph called “the great work,” the Official Biography now being completed by Hillsdale College, will profit by consulting the four Randolph Churchill books, particularly His Father’s Son, to learn about the relationship between the two of them.

“Randolph, Hope and Glory,” as detractors referred to him in the 1930s, emerges as a dynamic speaker, a brilliant journalist, a gallant soldier, a skilled biographer, a frustrated son, and, in the end, an honest man: as honest about himself as he was of others. Not so bad a eulogy, after all. I think Randolph would settle for that.