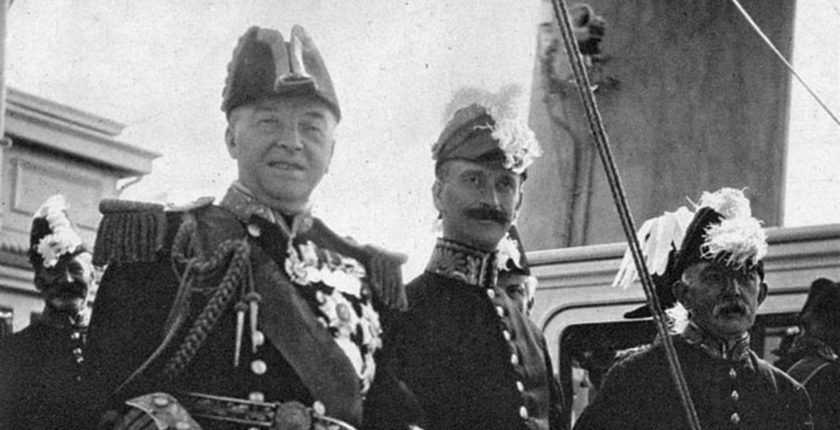 Featured Image: Fisher at his apogee (left), with Lords of the Admiralty, 1907 naval review. (Daily Telegraph, 1908)

Admiral Fisher and Churchill’s preoccupations were nowhere evident in the morning newspapers of 7 March 1916. Headlines reported a new terror: Zeppelin raids on ports, towns and naval bases. Despite rough weather on the 5th and 6th, ninety bombs were dropped over eight British counties. Three German airships headed for Rosyth, the naval base. High winds diverted them to Hull, where their bombs killed eighteen and injured many more. On the 7th a Zeppelin dropped a 1,000-kilogram bomb on Warrington Crescent, near Paddington, London. Among the dead, ironically, was Lena Ford, who had written “Keep the Home Fires Burning.”

All the principal characters were at the House of Commons: Prime Minister Asquith and First Lord of the Admiralty Balfour. From the Gallery Colonel Maurice Hankey, Secretary of the War Cabinet, watched closely. With Churchill to speak, there was tension and anxiety in the air. Hankey, conscious of the unfolding drama, observed Admiral Fisher sitting sphinx-like in his favourite seat behind the clock. He thought the face of the old admiral resembled that of an Indian Buddha.

Churchill began with an impassioned indictment of Admiralty management and the government. Carefully, precisely, he cited shipbuilding delays, the German threat to Britain’s maritime ascendancy, the lack of drive and conviction. Change was demanded. He wound up with one of the most remarkable reversals of his political career.

[Fisher’s] six months of war administration…will, I believe, rank as one of the remarkable periods in the history of the Royal Navy. I did not believe it possible that our very cordial and intimate association would be ruptured…. We parted on a great enterprise upon which the Government had decided and to which they were committed and in which the fortunes of a struggling and ill-supported Army were already involved; it stood between us as a barrier. [But we] have now reached an entirely different situation, and I have no doubt whatever what it is my duty to say now. There was a time when I did not think that I could have brought myself to say it, but I have been away for some months, and my mind is now clear.

The times are crucial. The issues are momentous. The Great War deepens and widens and expands around us. The existence of our country and of our cause depend upon the Fleet. We cannot afford to deprive ourselves or the navy of the strongest and most vigorous forces that are available. No personal consideration must stand between the country and those who can serve her best. I feel that there is in the present Admiralty administration, for all their competence, loyalty, and zeal, a lack of driving force and mental energy which cannot be allowed to continue, which must be rectified while time remains and before evil results, and can only be rectified in one way. I am sure the nation and the navy expect that the necessary step will be taken…. I urge the First Lord of the Admiralty without delay to fortify himself, to vitalise and animate his Board of Admiralty by recalling Lord Fisher to his post as First Sea Lord.

Churchill’s plea was met with consternation. “…he said a lot of true things and his speech was well received,” wrote Hankey, “except the Fisher suggestion.” Clementine Churchill thought her husband’s call for Fisher a colossal blunder. Margot Asquith, the prime minister’s wife, was furious: “I hope and believe Winston will never be forgiven,” she wrote Balfour. “Henry & I were thunderstruck at the meanness & the gigantic folly of it…. He is a hound of the lowest sense of political honour, a fool of the lowest judgement & contemptible.” Her daughter Violet, one of Churchill’s closest friends, had been aghast, as she wrote later, in Winston Churchill as I Knew Him:

The debate lives in my memory as one of the most painful I have ever listened to…. Had I gone mad? Had Winston?… What possessed him? I remembered long talks in which he had poured out his heart to me about Fisher, his vacillations, his constant resignations (my father and I once counted up nine), and his desertion. Fisher was responsible for the coerced Coalition, for Winston’s exile from the office he loved so dearly, in part at least for the failure of the Dardanelles. He had dealt with him faithfully in his resignation speech. Could he possibly believe in the course that he was advocating? It would be unlike him to swerve from his convictions. Yet if he believed in it he must surely be deranged? I left the Gallery when he sat down, feeling unable to face what was to follow.

Violet knew about the upcoming debate, and of Churchill’s conversations about it, including that with her parents. She knew of his contacts with the newspapermen, Garvin, and Scott (although not about the Duchess of Hamilton). It seemed to her that Churchill had been guided to this position—that a plot had been hatched, and that her dear friend Winston was its unwitting tool.

Fisher, unsurprisingly, was ecstatic. To Admiral Jellicoe at Scapa Flow he wrote with his usual exaggerations: “Isn’t it interesting how personal attacks (IF LEFT ALONE) always rectify themselves? Vide Winston’s amazing change of front towards me! His speech in the House of Commons was really wonderfully good. HE HELD THE HOUSE ENTHRALLED!… I had an ovation as I left the Peers’ Gallery. All the MPs got up and cheered me as I walked out, and the Speaker did not stop them!”

Prime Minister Asquith had distrusted Fisher since the Admiral had vanished from his post in May 1915—when the PM had demanded he return “in the King’s name.” He would never again accept Fisher at the Admiralty. Churchill’s advocacy was beyond his comprehension. When he next saw Churchill, on 9 March, Asquith cautioned him against taking further rash actions that would wreck what was left of his career.

Asquith tried to defuse Churchill’s criticism by inviting Fisher to a War Council on the 8th. All the principals were there: Asquith, Balfour, Admiral Sir Arthur Wilson, the Chief of the War Staff, the Chief of the Imperial General Staff and others. The old admiral failed to make a good impression. Balfour criticized to the Churchill-Fisher naval administration, giving vent to his high intelligence and analytical powers. Fisher had no doubts as to the outcome, as he later explained to Hankey: “Arthur ‘Philosophic Doubt’ Balfour wiped the floor with me.”

Later that day it was Balfour’s turn to speak in the Commons. Denying that the Admiralty lacked drive and efficiency, he denounced Churchill’s appeal for Fisher: “I do not imagine that there was a single person who heard my Rt. Hon. Friend’s speech who did not listen to this latter part of it with profound stupefaction.” With customary craftiness, Balfour compared Churchill’s earlier words describing Fisher’s inability to give advice, ridiculing the idea of replacing the current First Sea Lord, Admiral Sir Henry Jackson. It was a sardonic rebuttal, effectively arguing that Churchill had no sense of proportion and was a dangerous man.

Churchill responded with resentment, and stuck to his guns: “The real fact is that if we could associate in some way or another the driving power and energy of Lord Fisher, with the carrying out of Lord Fisher’s programme at the highest possible speed, there is no reason to suppose that great public advantage would not result from that.” But the heat had gone out from his argument. Many of his friends concluded that he could not keep out of arguments, refused to bide his time, and lacked tactical skills with Parliament and the press.

Not all, however. The industrialist Sir Arthur Markham, a Liberal MP, called Balfour’s attack “cheap rhetoric…cheap sneers.” Fisher had worked wonders at the Admiralty, Markham said, quoting Jellicoe: “No man has ever done more for his country.” The Earl of Rosebery, a former Liberal prime minister, was also supportive. “Every one has been kicking Winston because he is down,” he told Fisher. “…to me there is something magnanimous and creditable [about it]. But he ought to have given his reasons for his change of view, instead of producing it like a rocket.”

Within the navy, Churchill’s call for Fisher’s return caused concern. All the same, we have this mitigating view from one officer who, though he feared Fisher, knew Churchill well, and saw the wider horizons. Sir Roger Keyes wrote:

Of course everyone will attribute some evil ulterior motives to him…. but though I think it was ill advised and criminally stupid of him, I do believe it was in good faith. You remember I said to him he had nursed a viper which had stung—[and] he said quite passionately—“I’d do it again, even though [Fisher] did break me—he brought such fire and vim into the construction and production for the navy and accomplished things which no one else could have done.” [Fisher] certainly provided us with some wonderful and invaluable craft, but…his whole conduct in the Dardanelles business ought to be sufficient to insure his never being allowed to have anything to do with the conduct of the war or the running of the navy. I may be prejudiced but 99% of officers in the navy would view his return with the greatest misgiving. I have not met one out here holding any other opinion.