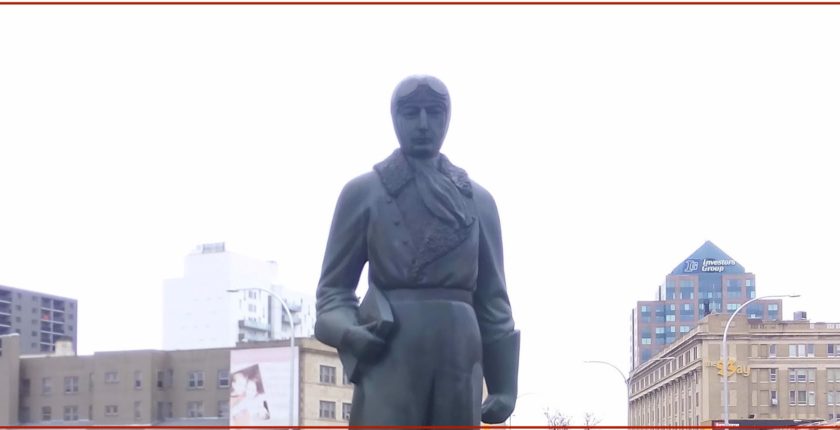 “Din of many tongues”

William Samuel Stephenson, one of Canada’s most courageous sons, was a bold friend of freedom. Churchill, recommending him for a knighthood in 1945, wrote: “This one is dear to my heart.” Sir William died at 93 in Bermuda in January 1989. At once, prominent detractors denounced him vociferously for laying claim to accomplishments they thought belonged to others. They seemed in a hurry to heap opprobrium on his coffin and reputation.

A few undoubtedly believed they were being friendly in saying senility had betrayed him and lured him into hyperbole. But the headlines that raced around the globe did not exculpate him. “Old Men Forget,” but it seemed that—like young men—they may also lie. Sir William had the misfortune to nod or acquiesce too readily in the presence of over-zealous or opportunistic journalists. The paramount point is that his memory lapses were preceded by a stroke. Only his immense stamina enabled him to survive for so many years.

It takes no great leap of the imagination to postulate that Churchill, ever loyal, would not have condoned the unseemly attacks on Stephenson after ill-health had rendered his recollection faulty. The damage to Sir William’s reputation in the world at large is sad, but the diminishing of his esteem in the eyes of Canadians robbed him for a time of national honour and homage.

From quiet to controversy

Embedded in the Canadian psyche is a distaste for showiness. There are only about 38 million Canadians. If one of them wins a place in the international arena, the last instrument he is expected to play is his own trumpet. It was Robert Sherwood, the American playwright and biographer, who bestowed on Stephenson the title of “a quiet Canadian.” The people of Canada found this much to their liking. But the longer Stephenson lived, the louder became the controversy surrounding him.

When I first wrote of him he lacked a worthy monument in his native land. That has since been rectified. In his home town is a bronze statue and a public library bearing his name. In 2009 Winnipeg’s Water Avenue was renamed William Stephenson Way. In Whitby, Ontario, a school carries his name, and a street named Stephenson connects with streets named Intrepid and Overlord. In Oshawa, Ontario, Branch 637 of the Royal Canadian Legion is named for Stephenson. Intrepid Park, named after the cablegram address of Stephenson’s British Security Coordination in New York City, is Oshawa Camp X, the wartime training school for clandestine operations.

Time and history view Stephenson more dispassionately than some of his contemporaries. Meanwhile no harm, and perhaps a little justice, may result from reviewing those of his achievements which are beyond dispute.

Amidst the burning blue

His birthplace was Point Douglas, near Winnipeg, Manitoba. He attended high school in Winnipeg, left at the outbreak of the First World War, and was almost 19 when he served in the trenches. After he was gassed by the Germans, he displayed the utmost courage in learning to fly during the period when he was recuperating. Then he transferred from the army to the Royal Flying Corps. His exploits earned him the Military Cross, the Distinguished Flying Cross and other decorations which I saw arrayed on his study wall in the manner favoured by many veterans.

Equally enterprising in peace, he used the decade following the First World War to become a wealthy industrialist. His business acumen was matched by his inventiveness. He married an American, Mary French Simmons, of Springfield, Tennessee. Her grace and beauty are captivatingly evident in photographs. It was her picture that he chose to send first over the device he invented for transmitting photographs via radio.

In 1987 I was invited to preside at a ceremony in Victoria, British Columbia, to introduce Canada’s first home visual telephone. I was seized with the idea of sending a photograph of Sir William over the phone, which was equipped to transmit and receive photographs. In granting permission for me to do this, Stephenson telexed:

Nostalgia inspired me to review again photographs of 1924 captioned, ‘Canadian Scientist Marries Tennessee Girl in London.’ The photos are of my wife, which were the first to be transmitted by radio across the Atlantic and appeared in various U.S. newspapers, including the Boston Advertiser (21 September) and The New York Times (31 August).

Such was the mettle and audacity of Stephenson that not long before the Second World War he volunteered to shoot Hitler. Colonel Noel Mason-Macfarlane, British military attaché in Berlin, also volunteered for the mission. It was turned down by Lord Halifax, then British Foreign Secretary. Stephenson was launched on his spymaster career when appointed to head British Security Coordination in New York, before the United States had entered the Second World War.

Stephenson was recommended by Sir Stewart Menzies, head of British intelligence. Churchill himself had a knack of putting the right people in places where they would be of crucial value. Stephenson embarked with enthusiasm and daring (and also without remuneration). His gigantic task was running a centre for counter-intelligence in the Western Hemisphere.

Although J. Edgar Hoover railed against British spy operations, BSC worked successfully with the FBI to unmask German espionage. Stephenson played a major role until the Allies triumphed. From Britain came his knighthood, from America the Medal for Merit. Up to that time he was the only non-American to gain the award.

Contrary to a notorious book about him, “Intrepid” was not Stephenson’s code-name but the cablegram address of his New York offices. Nor did Stephenson and Churchill meet during the war (see note below on Cave Brown’s book). Of course it was not much of a stretch for the ignorant to believe he was “a man called Intrepid.” Names aside, he was the right man for the job. His business travels had allowed him to organize private intelligence contacts who served admirably in prewar days when, out of government office, he needed backstage help to gather convincing information of Hitler’s perfidy.

M.R.D. Foot outlined the warm relationship between Stephenson and the formidable “Wild Bill” Donovan, appointed by Roosevelt in July 1941 to head overseas intelligence. Foot credits the Donovan-Stephenson friendship with helping convince Roosevelt to bring about the famous destroyers-for-bases deal. Foot says Donovan and Stephenson got along “excellently at their exalted level: not so their underlings.” Not so indeed—a few underlings remained embittered enough to hack at a hero decorated in both world wars. (N.B.: Foot’s accounts are disputed by some historians as exaggerating the relationship.)

Americans, never afflicted with meanness of spirit, have not applauded assassins of Stephenson’s character. When he was nearing 90, about 800 people gathered in New York to honour him. He was presented with the William Donovan Award to acknowledge unique contributions to freedom. Stephenson’s New York appointment irritated the hierarchy of the British secret service. Although fully aware that a stroke had marred his old age, they stamped on his grave.

Perceptive historians have a sure indication of their insensitivity. They defeated not Stephenson, but themselves. Posterity is the crucible from which gold emerges. Stephenson’s friends can count on that. Churchill’s high assessment of his comrade-in-arms will prevail.

Mr. Robbins (1915-2009), of Victoria, British Columbia, was director of the School of Journalism and Communications, University of Regina. Earlier he was director of the Canadian Broadcasting Corporation’s National Television News. Before his death he kindly left me his writings on Churchill. This essay, derived from its first appearance in 1990, is based on conversations and messages between the author, Sir William Stephenson, and Canadian academic Dr. L.I. Barber. The author also cites The Royal Gazette, Bermuda, 27 February 1989; The Regina Leader-Post, 3 March 1989; Maclean’s, 3 July 1989; and The Columbia Encyclopedia (1950 edition). Note: When first published, Mr. Robbins regretted that Stephenson had no memorial in his native land. That has since been rectified several times over, and we have modified his account to include these tributes. See also “Great Contemporaries: Brendan Bracken.” —Richard Langworth

Keith Jeffery, The Secret History of  MI6 (2010). A balanced, fair and qualified historian of intelligence, Jeffery strips away the mythology and hype but credits Stephenson’s contribution as “very significant.” One of the myths is that Stephenson was appointed to New York over Stewart Menzies’ objections. Jeffery shows that he got there precisely because of Menzies’ support.

David Stafford and J.L. Granatstein, Spy Wars: Espionage and Canada from Gouzenko to Glasnost (1997). In the chapter entitled “The Man Who Never Was,” the authors deal with the Intrepid myth and explain how it took such a strong hold in Canada.

Henry Hemming, Our Man in New York (2020), This biography corrects certain exaggerations about Stephenson, while not disputing his importance as head of British Security Coordination.

M.D.R. Foot, Resistance: European Resistance to Nazism 1940-1945 (1976). The author is a historian of Britain’s Special Operations Executive and wartime intelligence.

Montgomery Hyde, The Quiet Canadian: The Secret Service Story of Sir William Stephenson (1962). This work was effectively commissioned by Stephenson and presents him in a favorable light. For example, Hyde claims that in 1936, Stephenson’s information on Germany’s secret military expenditures allowed Churchill to frame a devastating question in Parliament.

Anthony Cave Brown, “C”: The Secret Life of Sir Stewart Menzies, Spymaster to Winston Churchill (1987). The author claims that Churchill and Stephenson “close friends,” and that Roosevelt entertained Stephenson at Hyde Park estate in Summer 1940. (Martin Gilbert found no evidence that they had met during the war, though they did meet by chance at Claridge’s afterward, when Churchill was no longer PM. This does not mean Churchill was unaware of Stephenson’s work. SIS station chiefs usually did not know the PM of the day, indeed security protocol probably meant that it was wiser that they shouldn’t.) Cave Brown was another author responsible for the myth of Churchill leaving Coventry to be bombed. Withal, this is a book to be read with healthy skepticism. —RML