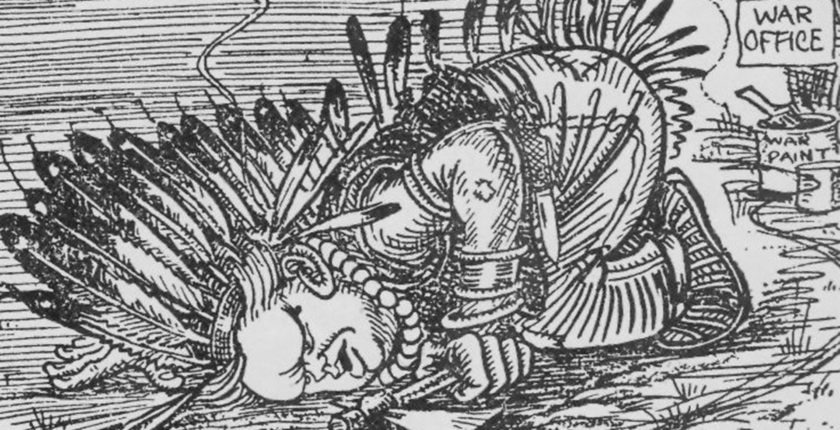 "Shh - I think I can hear a little war coming in the East!" Myths Minor and Major: Churchill was neither a warmonger, as his enemies frequently alleged, nor a descendant of Native Americans, as he and his family liked to believe. (Strube in the Daily Express, 23 January 1920).

Myth and reality: debunking the lies

Forty-seven years ago, I first visited Great Britain and signed up for a tour of Parliament. Our guide regaled us with a myth I still treasure. On the floor of the Commons, I was told, Lady Astor once sang out: “Winston! If I were your wife, I would poison your coffee.” To this, Churchill reportedly replied, “If I were your husband, I would drink it.” 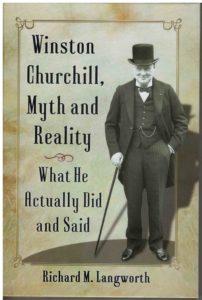 Three years later, as a student at Oxford, I heard another myth, no less wonderful. Allegedly, George Bernard Shaw once sent Churchill two tickets to the opening night of one of his plays. “Bring a friend,” said the attached note, “if you have one.” Churchill reportedly replied: “Can’t make the first performance. Will attend the second, if there is one.”

Thanks now to Richard Langworth, I can no longer honestly repeat these tales. As he makes clear in this entertaining and enlightening volume, Shaw and Churchill both denied the latter story, and the first is based on a wisecrack widely circulated long before Nancy Astor crossed Churchill’s path.

Nor, you will discover, in Langworth’s learned disquisition, did Churchill ever call Clement Attlee “a sheep in sheep’s clothing.” It was, moreover, not Churchill who remarked, “the heaviest cross I have to bear is the Cross of Lorraine.” And there is no evidence of a 1937 exchange with German ambassador von Ribbentrop. The former supposedly said, “If there is war, we will have the Italians on our side this time.” WSC allegedly replied, “It’s only fair. We had them last time.”

I do not mean to imply that Langworth is a spoilsport. You can still tell these tales as long as you refer them as apocryphal. But, frankly, I wish that they were accurate. As the Italians say, “Si non è vero, è ben trovato.”

From the silly to the sublime

More serious myth is of course addressed in these thirty-seven chapters and three appendices. Langworth is devoted to setting important records straight. If you have never read a Churchill biography, do not start with this book. But, once you have read such an account, you will find this volume illuminating. Though aimed at correcting error, it casts considerable light on how errors arise. It also tells us something about ourselves and the world we live in.

In nearly every case, the democratic instinct is at fault. Those who purvey myth concerning Churchill are nearly always attempting to cut the great man down to size. Sometimes their mistakes are honest blunders—products of misunderstanding or haste. More often, however, malice is the motive. In the course of his lengthy career, Churchill gave a great number of speeches and wrote a great deal. It is easy to rip a phrase or even a sentence out of its context and use it to misrepresent his thinking and conduct. Indeed many find it a relief to be told that he was a scoundrel after all.

Fortunately, Langworth is intimately familiar with nearly everything that Churchill wrote and said. When confronted with something fishy he can go to the source, cite the evidence, and place it in context. His diligence as a sleuth knows few bounds. On occasion he even turns up information disproving a myth entertained by Churchill himself, and his family.

From youth to old age

The book unfolds chronologically. Langworth begins with Churchill’s ancestry, his mother’s supposed indiscretions, his brother’s parentage, the cause of his father’s death, and Churchill’s purported educational shortcomings. Those who love salacious gossip will be disappointed to learn that Churchill’s failures as a student were exaggerated by Churchill himself and that it is unlikely that he was of American Indian descent on his mother’s side, that she had large numbers of lovers, that one of these fathered his brother Jack, and that Churchill’s father Randolph died of syphilis.

In the five chapters devoted to Churchill’s early political career, Langworth examines his position on women’s suffrage, refutes the preposterous character of the claim that he bore any responsibility for the sinking of the Titanic, and explores the role he played with regard to the Welsh strikers at Tonypandy in 1910 and at Llanelli in 1911, the suggestion that he interfered with the police and with fire-fighters during the siege of Sidney Street in 1911, and his attitude to Irish self-rule. What emerges from all of this is the man’s judiciousness, the unscrupulous character of some of his critics, and the bitterness of the partisans whom he failed fully to satisfy.

In a series of chapters devoted to World War I, Langworth treats Churchill’s depiction as a warmonger, his efforts aimed at preventing or at least delaying the fall of Antwerp, the strategy he pursued in the Dardanelles, the claim that he was responsible for the sinking the Lusitania, his attitude towards America’s involvement in World War I, and his supposed advocacy of chemical warfare. In chapters devoted to the interwar years, he examines the charges that Churchill was an alcoholic, his posture with regard to Bolshevism, his position on the question whether there should be a Jewish homeland in Palestine, his relations with Mahatma Gandhi, his dealings with Mussolini, and his treatment of Hitler.

Langworth devotes eleven chapters to the Second World War. In these, he explores the question whether it was Churchill’s voice that people heard when his speeches in Parliament were broadcast on the radio, and he considers the statesman’s role in internment policy and with regard to the practice of torture. He answers those who claim that Churchill was responsible for Britain’s failure to prevent the bombing of Coventry. We review the controversy concerning the opening of a second front. Langworth examines Churchill’s responsibility for the strategic bombing campaign. He refutes those who blame Churchill for the famine in Bengal. He explores Churchill’s attempts to keep Franco’s Spain out of the war. And he weighs the charges that Churchill was responsible for the destruction of Monte Cassino, for the failure to bomb Auschwitz, and for the shortage of food in German-occupied Europe.

In the last five chapters, Langworth looks at the postwar years. Here he examines Churchill’s responsibility for the postwar settlement in eastern Europe, his attitude towards the Russians, and his posture with regard to European unity. He also pauses to examine the character of Churchill’s marriage and the relations he maintained with the ordinary people with whom he regularly came into contact.

The devil is certainly in the details, and Langworth, in contrast to those whom he is seeking to correct, pays very careful attention to the particulars. But the book is more than the sum of its parts. It may not be a substitute for a fully rounded biography, but from reading it one can easily construct a portrait of the man. Langworth’s account is not a hagiography. The Churchill who emerges from it is human, all too human. His failures are those of a man with a lot on his plate.

The great virtue of this work is that it invites us to sit where Winston Churchill sat; to face the issues he faced, knowing only what he knew; and then—and only then—to assess the stances he took and the decisions he made.

In this particular, Langworth’s book is a primer for the study of statesmanship. It reminds one that self-righteousness and moral high dudgeon are no substitute for prudence and good sense and are, in fact, apt to get in their way; and it encourages its readers to judge political praxis, as Churchill did, always with an eye to the consequences of what one does and of what leaves undone.

Dr. Rahe is a Professor of History and Politics at Hillsdale College and author of the renowned study, Republics Ancient and Modern: Inventions of Prudence: Constituting the American Regime. His latest book is The Grand Strategy of Classical Sparta: The Persian Challenge.