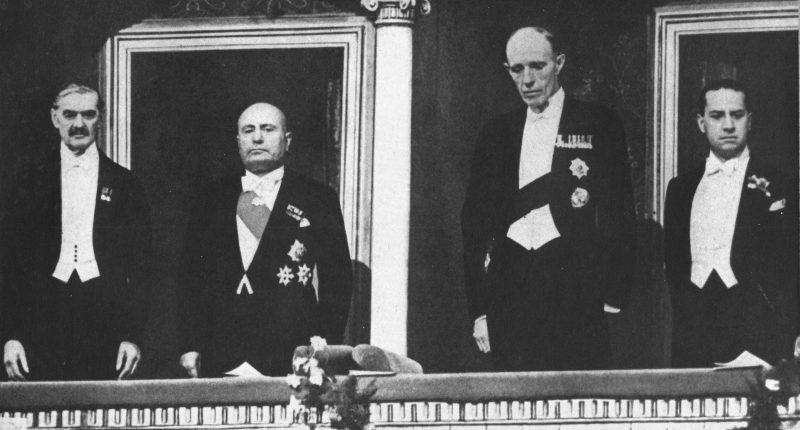 Chamberlain, Mussolini and their respective foreign ministers, Halifax and Ciano, Rome Opera House, 1939. Eighteen months on, Halifax would argue for approaches to Hitler with Mussolini as arbiter—anathema to Churchill, and in the end everyone. Britain would fight on, as Churchill later wrote, “till those who hitherto had been half blind were half ready.” (Wikimedia Commons) 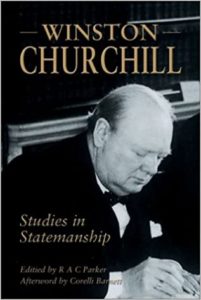 From time to time we reconsider older books of note on Churchill subjects. Cambridge University’s recent, one-sided panels on Churchill and race prompts this look at his statesmanship in a more balanced Cambridge symposium.

There have been great scholars at Cambridge. “There are times,” wrote one of them, Sir Geoffrey Elton, “when I incline to judge all historians by their opinion of Winston Churchill: Whether they can see that no matter how much better the details, often damaging, of man and career become known, he still remains, quite simply, a great man.”

Sir Geoffrey would likely have judged this Cambridge collection favorably. It was organized by Correlli Barnett, then Keeper of the Churchill Archives Centre. Its papers were compiled by the late R.A.C. Parker, a historian who specialized in the appeasement period. Its contents are varied, thoughtful and balanced. They demonstrate the right way to organize a serious symposium.

“My views are a harmonious process…”

Like other collections of broad essays, the Parker book is by nature somewhat disjointed. It is not all about Appeasement. Fifteen papers range from the daughterly observations of Lady Soames to Churchill’s relations with German Chancellor Adenauer (Hans-Peter Schwarz). They extend to postwar subjects like “Churchill and the European Idea” (Martin Gilbert). At that time, Britain had only just ratified the Treaty of Rome, creating the modern European Union. There was much discussion then about Churchill’s vision for “united Europe.”

The Parker book is consistent in this respect: It attempts neither to rewrite nor to demythologize Churchill, as did the concurrent Churchill: A Major New Assessment. Nor does it try to whitewash him. It is “international,” with contributors from Poland, Denmark, Germany and Italy as well as the USA, Britain and Canada.

The book reaches no conclusions about Churchill’s character that have not been reached by others—critics and supporters alike. Most contributors concede that “in the great drama,” as Charles de Gaulle said, “he was the greatest.” It shows how Churchill is observed in various countries—and how his own views changed with circumstance. (Once challenged for inconsistency, he responded: “My views are a harmonious process which keeps them in relation to the current movements of events.”)

Many papers offer contemporary relevance. Tage Kaarsted studies Britain and the smaller European states, specifically Denmark. He explains why, though Churchill did little for them in the Second World War, they considered him their hero. If his efforts were mainly symbolic, they were symbols enough for the brave resistance fighters.

Paolo Pombeni’s “Churchill and Italy” destroys the late-blooming myth that Churchill supported Fascism. He initially admired Mussolini and his more benign accomplishments. But he was never blind about whom he was dealing with. “Mussolini and Churchill spoke different languages, [but] mutual understanding was complete,” Pombeni concludes. Their understanding did not prevent Mussolini from believing anticommunist Churchill would never accept an Anglo-Soviet alliance.

Parker contains valuable studies of Churchill’s relations with the Navy—the American (Phillips O’Brien) as well as the British (Jon Sumida); and his attitude toward Europe, from balance of power politics (Brian McKercher) to the postwar situation (Warren Kimball) to the European Community (Gilbert). There are thoughtful pieces on his relations with France (Maurice Vaisse, François Kersaudy), Germany (Schwarz) and Poland (Anita Prazmowska).

There is plenty of contention in the Parker collection. One example is Bernd Martin, a German history professor who takes up the question of Britain backing away from the war after France fell. That was debated years ago and well by John Charmley and Larry Arnn. Martin mainly takes Charmley’s revisionist line, with some new twists.

Roosevelt’s offer to mediate peace talks in early 1939, Martin says, was “deliberately reserved.” Actually, the crafty Roosevelt wanted it to fail. American policy aimed to nullify German-Japanese industrial achievement, which threatened to surpass that of the USA. Roosevelt “egged on” Churchill to stand fast against Hitler, though he “provided no real help” to Britain. When he became convinced that war with Germany was inevitable, he goaded the Japanese into attacking Pearl Harbor. Apparently FDR was a clairvoyant who knew that Hitler would then declare war on the United States.

This analysis does not consider the nature of the American people. U.S. foreign policy in the 1930s, Martin writes, was in pursuit of trade dominance. One might ask: what foreign policy? The impulse of Americans is isolationist, except in extreme circumstances, witness their abhorrence of today’s endless foreign wars.

Martin asserts that Churchill seriously considered an armistice with Hitler during the war cabinet of 26 May 1940. Halifax supported exploring a meeting through the “good offices” of Mussolini. Martin offers the traditional revisionist explanation. To mollify Halifax, Churchill said he might accept a cease-fire based on “restoration of German colonies and the overlordship of Central Europe.” This offer is frequently cited as proof that peace was possible, but there is little else to cite. There is no evidence that Churchill seriously considered it.

Martin does not mention contemporary works by historians like Martin Gilbert or Sheila Lawlor (Churchill and the Politics of War (1994). Both showed that there was no space between Churchill, Halifax and Chamberlain after France fell in mid-June 1940. Martin does later admit that no British peace overtures followed France’s fall. Indeed he wonders if  even Halifax “would really have concluded a peace agreement with a vainglorious dictator like Hitler.”

So why speculate to the contrary?

Bernd Martin believes “Churchill did not understand Germany and German culture in general, let alone National Socialism….” Churchill seemed to grasp the later, at least, when he defined it in October 1938. Nazism, he said, “spurns Christian ethics [and] cheers its onward course by barbarous paganism.” It “vaunts the spirit of aggression and conquest, which derives strength and perverted pleasure from persecution, and uses with pitiless brutality the threat of murderous force.” Evidently Churchill understood German Nazism well enough.

When Studies in Statesmanship was published, we were in the midst of the revisionist argument that Britain should have edged away from the Hitler war in 1940. “Part of the trendy process of cultural self-flagellation and navel contemplating in which [proponents] indulge rests on a foundation of moral chauvinism,” wrote a correspondent. “This distorts what otherwise is the advantage of hindsight. with judgments and conclusions not just wrong, but infuriatingly wrong. One wonders who can possibly measure up to the high standards of these professional iconoclasts?” What would he say today?

Parker himself provided only a brief introduction: “…this book suggests Churchillian prose concealed a sharp, flexible and quick intellect unencumbered by prejudices, in practice if not in words….” In his own book, Chamberlain and Appeasement (1997) Parker argued that “collective security,” Churchill’s alternative to Chamberlain, was the more reasonable and honorable course. In Churchill and Appeasement (2000), he declared Churchill was completely right about Nazi Germany. Churchill’s proposed Anglo-Soviet alliance, he ventured, may well have deterred Hitler.

In this compilation, however, not a hint of Parker’s opinions interferes with or overrides those of his contributors. Which is something from which the moderator of the recent, egregiously one-sided Cambridge “race panel” might learn.

As editor, Alistair Parker took the responsible approach. He selected authors with a range of opinions who often disagreed with each other. Isn’t that the purpose of scholarly symposia? Perhaps Cambridge will do this again one day.