David Charlwood, “Churchill and Eden: Partners Through War and Peace” 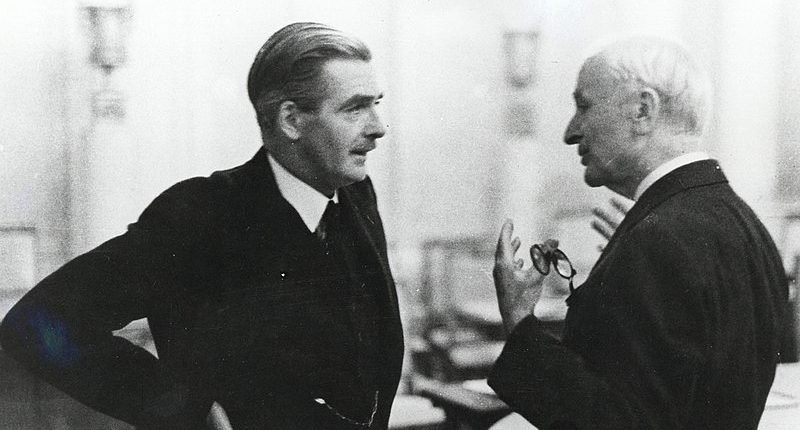 Foreign ministers: Anthony Eden with Cordell Hull, who wielded much less influence with his chief than Eden did. (U.S. Department of State, public domain).

David Charlwood. Churchill and Eden: Partners Through War and Peace. Yorkshire and Philadelphia: Pen and Sword, 2020, $44.95.

Historian Charlwood offers a fine account of Anthony Eden’s “close, enduring, and sometimes contentious relationship with Winston Churchill.” They were the last two Prime Ministers, he writes, who believed Britain was still a great power. Of course, Churchill’s stature swamps that of Eden, who is mainly remembered for his worst failure, the Suez crisis of 1956. Mr. Charlwood was prompted to write of their relationship by the way they were portrayed in The Crown.

With over 1100 books about Churchill, this could scarcely be called a dual biography. Instead Charlwood focuses on Eden’s impact on Churchill’s political leadership and world crises. As such, Churchill and Eden joins the small but significant body of Eden scholarship, including Randolph Churchill’s vitriolic The Rise and Fall of Sir Anthony Eden (1959). The genre includes three biographies by Rhodes James, Dutton and Thorpe, and Eden’s own three-volume memoirs (1960-65).

Churchill and Eden is attractive if pricey, well written, though the nearly four dozen chapters are sometimes short and choppy. Charlwood’s research is supported by endnotes and a select bibliography. The 21 contemporary photographs are a nice touch though the caption for one, showing Sumner Wells, incorrectly labels him U.S. Secretary of State—he was Under Secretary, 1937-43. In addition to being a worthy addition to the Eden biographies, this book also compliments and corrects Eden’s own books: his memoirs and his finale, Another World (1976)—the best of the lot, covering his early life.

Anthony Eden was a brave World War I officer, a devotee of Shakespeare (like WSC), and a gifted scholar of Iranian and Arabic languages and culture. Good looking, urbane and diplomatic, he was dubbed “the glamour boy” of 1930s British politics. Churchill, 23 years older, was a pariah with the ruling Conservative Party. Eden was still in his thirties when Stanley Baldwin made him Foreign Secretary in 1935. Yet he opposed Chamberlain’s appeasement policies toward Germany, Italy, Spain and Japan. In early 1938, he resigned over British acquiescence to Italy’s conquest of Abyssinia. Eden was one of the few leading Tories opposing appeasement. In his war memoirs, Churchill wrote emotionally on his loss:

My conduct of affairs would have been different from his in various ways, but he seemed to me at this moment to embody the life-hope of the British nation, the grand old British race that had done so much for men, and had yet some more to give. Now he was gone. I watched the daylight slowly creep in through the windows, and saw before me in mental gaze the vision of Death.

Very different in temperament, Churchill and Eden came powerfully together after the 1938 Munich Agreement sacrificed Czechoslovakia to Hitler. Their stock rose as unfolding events made a mockery of appeasement. Both joined Chamberlain’s government as the war began in September 1939, Eden as Dominions Secretary, Churchill heading the Admiralty. The following May, when Churchill became prime minister, he made Eden Secretary of State for War. During the war, Eden emerged as his most likely heir and successor. He became Foreign Secretary in December 1940 and Leader of the House of Commons in early 1942.

Compared to Churchill, Eden was less pro-American and more internationalist, diplomatic in words and demeanor. A realist, he was more ready than Churchill to plan for the postwar world. A ladies’ man with a bad first marriage (unlike WSC), he found love and stability in his second wife, Churchill’s niece Clarissa. Eden was one of the few people who could get Churchill to reconsider potentially rash words and decisions, Charlwood writes. He “demonstrated the stamina and eloquence to occasionally manage to change [Churchill’s] mind.”

While he did attempt at times to mellow the old warrior, Eden learned a measure of toughness from the Prime Minister. They often held heated arguments or exchanged testy telegrams. Eden, for example, thought it a mistake to divert British troops in a forlorn attempt to save Greece from Hitler in 1941. He also defended de Gaulle against both Churchill and Roosevelt. The Frenchman was difficult, Eden admitted, yet he was the best representative of his people. Eden also worked to maintain the alliances with both Russians and Poles.

Charlwood defends both men from popular misconceptions. He exempts them for worsening the 1943-44 Bengal Famine, which he blames on Japan and the war. He says it made no military sense to bomb the concentration camps. Rather than freeing the inmates, that would more likely have killed them, and many Allied air crews as well. Charlwood argues that Eden was a great Leader of the House, though Eden himself had his doubts: “I am not much use as a party man…I am not a political warrior like Winston but only [a] civil servant.”

The stress of war leadership affected Eden’s health, especially with gastric issues. He seemed to grow old before his time, while Churchill defied age and all medical odds. Defeated in 1945, Churchill became Leader of the Opposition, but Eden did the day-to-day work of running the party and representing it in Parliament.

In 1951 they returned to power in their familiar roles as premier and foreign secretary. Eden enjoyed a brilliant tenure, achieving several diplomatic coups. His best, Charlwood considers, was to forestall a potentially disastrous Anglo-American intervention in Indo-China in 1954, though the U.S. became embroiled there later. Churchill, growing older and less dynamic, was by now focused on a summit meeting with the Russians. Unlike the Americans and most of  his colleagues, he believed could end the Cold War.

Eden was increasingly frustrated at not getting the top job. Finally, in April 1955, Churchill resigned and he had his chance. Unfortunately, he was soon involved in a crisis over the Suez Canal. In July that symbol of global power, primarily owned by Britain and France, was nationalized by Egypt’s dictator, Gamal Abdel Nasser.

Eden wanted to retake the Canal but failed to get American support. He concocted a secret plan to have Israel attack Egypt and then have Britain and France intervene to protect the Canal. Instead, Nasser blocked the waterway. President Eisenhower was angered, the pound collapsed, and Eden had to call the war off. He resigned in ill health a short time later.

When Churchill retired in 1955 he remarked, “I don’t believe Anthony can do it.” His premonition was sadly true. Of Suez he said, “I would never have dared, and if I had dared, I would never have dared stop.” Eden had tried to get out of Churchill’s shadow, but instead had only highlighted their differences. As his colleagues began pushing Eden to resign, one remarked that Churchill “would have told them to go to the furthermost part of hell, but as you know very well, Eden has none of Churchill’s pugnacity.”

Anthony Eden enjoyed a long retirement in relative obscurity. He did not publicly defend himself, though he appreciated it when Churchill did. He wrote his memoirs in reverse, beginning with his postwar years and ending with the prelude to World War II. All his writings appeared after he left office. Churchill was around so long that he was often back in office when his previous memoirs appeared.

Unlike Churchill, Eden went to the Lords in 1961 as the Earl of Avon, taking that name in honor of his beloved Shakespeare. He spoke eloquently of his old colleague at Sir Winston’s 1965 funeral. Churchill, he said, “spoke fearlessly and without favour of what he saw. He sensed the danger for his country with the instinct of an artist and the knowledge of the historian.” He lived until 1977, overlooked and undervalued as Churchill’s “mainstay.”

David Charlwood has helped remedy this to some degree. Perhaps, however, Churchill’s words about Lord Curzon fit Eden best: “The morning had been golden; the noontime was bronze; and the evening lead. But all were solid, and each was polished until it shone after its fashion.”

A frequent contributor to The Churchill Project, Mr. Shepherd is the University Archivist and Head of Special Collections at The Catholic University of America in Washington, D.C.